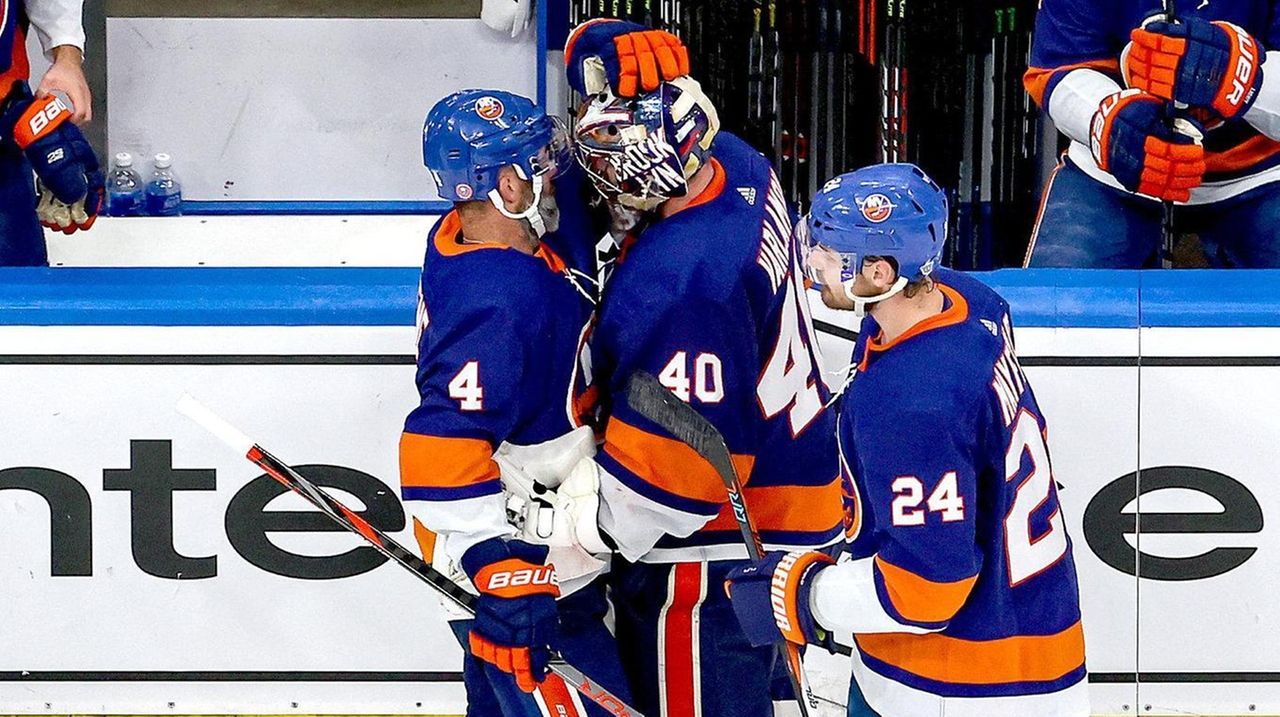 Anders Lee, Scott Mayfield and Barry Trotz reflected on the Islanders' deep postseason run after their Game 6 loss to the Tampa Bay Lightning eliminated them from the Stanley Cup Playoffs. Credit: NHL

Disappointment and sadness, certainly, after the Islanders’ most successful season since 1993 ended two wins short of their first Stanley Cup berth since 1984. Frustration, maybe, after Thursday night’s 2-1 overtime defeat to the Lightning in Game 6 of the Eastern Conference finals at Rogers Place in Edmonton.

But a fierce pride beamed through as well. And, perhaps, just a hint of anticipation of greater success ahead.

"That’s a special group in that room," the Islanders captain said. "To that very last minute, every one of us believed in each other and what we were doing and the road we were on. Obviously, we came up short. But there’s a huge sense of pride right now in every single one of those guys and everyone involved.

Island Ice Ep. 53: A gallant effort right til the end for Isles

Andrew Gross is joined by Neil Best and Colin Stephenson to recap Game 6 of the Islanders' Eastern Conference Final loss to Tampa Bay that ended their season.

"I don’t see why not," Lee added when asked if this deep playoff run showed the Islanders would be perennial Stanley Cup contenders. "I can’t speak volumes more about this group."

Anthony Cirelli, taking Barclay Goodrow’s feed to the right post, ended it at 13:18 of overtime.

The Lightning, who had top-line center Brayden Point back in the lineup after he missed the two Islanders’ wins in the series in Games 2 and 5, will face the Stars in the Stanley Cup Final, starting on Saturday night.

The Islanders, without top-pair defenseman Adam Pelech after he played through a reported broken wrist in Tuesday night’s 2-1 double overtime win in Game 5 and a step behind for much of the first 30 minutes, were kept in the game by Semyon Varlamov’s 46 saves.

And, just as they had in Game 5, they started overtime killing off a lengthy power play. This time it was defenseman Andy Greene drawing a four-minute high-stick against Nikita Kucherov with 23 seconds left in regulation. In Game 5, Anthony Beauvillier drew a double-minor for high sticking defenseman Mikhail Sergachev at 18:37 of the third period.

"You learn a lot of things about your team," said Islanders coach Barry Trotz, who led the Capitals to the Cup in 2018 before switching jobs. "The biggest is how much adversity we had to go through, through different series, people getting hurt. Today was a good example of resilience. Our goaltender kept us in it for the first 30 minutes. The last 30 minutes of hockey, we were step for step with the Lightning."

"I had a high belief right through this whole thing," Trotz said. "When Brock stole that puck, I thought it was only fitting. I thought it would be our time to get to Game 7. Unfortunately, their goaltender, he’s good."

The Lightning had lost their last five chances to advance to the Cup Final, dropping Games 6 and 7 to the Penguins in 2016, Games 6 and 7 to Trotz’s Capitals in 2018 and Tuesday night’s Game 5 to the Islanders.

Salute to the Islanders: Post your message to the team

The Islanders took a 1-0 lead for the fifth straight game in the series, as defenseman Devon Toews beat Vasilevskiy with a wraparound to the right post at 4:15 of the first period.

But, otherwise, it was as lopsided as a period could get, with the Lightning outshooting the Islanders, 17-6, continually outskating them to pucks and keeping the play mainly in their offensive zone.

Defenseman Victor Hedman, with his ninth goal of the postseason, tied the game at 1-1 at 6:28 of the first period as Varlamov made his one mistake, allowing a long rebound off defenseman Erik Cernak’s initial shot to bounce high into the slot, right to Hedman.

Varlamov’s steady play and back-to-back penalty kills in the second period finally started to get the Islanders more engaged physically and in the offensive zone.

Just not enough to make it to Game 7. But they made it one round further than in Trotz’s first season.

"I think the bar has always been set high," defenseman Scott Mayfield said. "I think this year shows maybe other people how high we think it is. It hurts now, but that’s a silver lining if you want to look at it that way. It’s trending in the right direction."

Best: Isles' playoff run will forever be remembered fondlyThe Islanders played a franchise-record 22 postseason games, won 13 of them, and gave fans seven weeks of thrills. Varlamov stands out in Isles' Game 6 lossAs the Islanders fought to stay alive in Game 6, no one fought harder than Varlamov, who made 46 saves and who coach Barry Trotz called the Isles' best player in the game. Isles' Pelech needs surgery after missing Game 6 lossThe top-pair defenseman missed the Islanders' series-deciding overtime loss to the Lightning with a reported broken wrist. Game 6 photos: Islanders vs. LightningScenes from Game 6 of the Eastern Conference Finals between the Islanders and the Lightning.