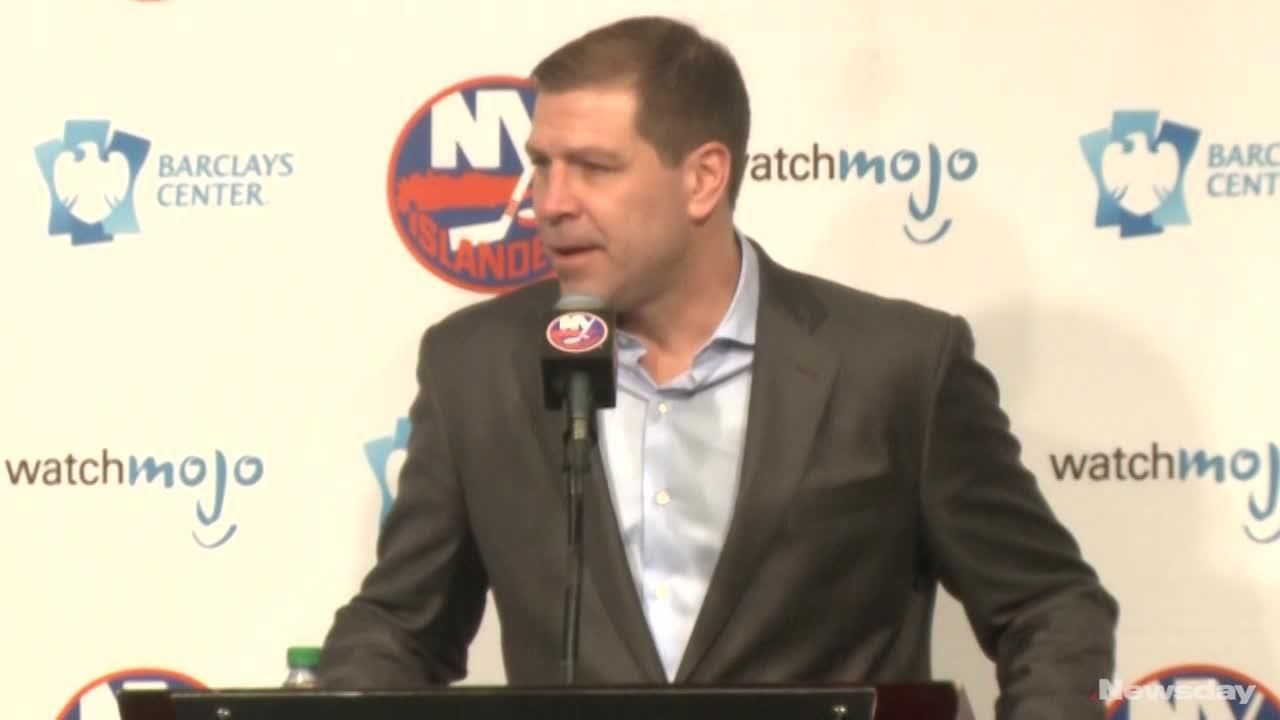 On Tuesday, Dec. 19, 2017, after a 6-3 loss to the Red Wings, Islanders head coach Doug Weight gave his thoughts on the team's possible move to the Belmont site. (Credit: Newsday /Robert Cassidy)

The Islanders are coming home.

The hockey team was informed Tuesday that its proposal to build a new arena at Belmont Park in Elmont was selected as the winning bid, according to people familiar with the situation.

A news conference is scheduled for Wednesday morning at the racetrack in which Gov. Andrew M. Cuomo is expected to be on hand.

The Islanders’ bid includes an 18,000-seat, year-round arena that would host 150 events annually as well as 435,000-square feet of space for retail, a hotel with 200 to 250 rooms and a 10,000-square foot “innovation center” that would be developed with resident input.

The proposal was selected over New York City FC, a professional soccer team partially owned by the Yankees. That bid called for a 26,000-seat open-air stadium in addition to 400,000 square-feet of space for retail, a 5.2-acre community park and a 2-acre soccer facility.

An ESD spokeswoman declined to comment while Cuomo’s office did not respond to multiple requests for comment.

“Governor Cuomo, my colleagues in government, and I have worked very hard to make the best use out of Belmont,” Kaminsky said in a statement. “I believe that tomorrow’s announcement will benefit Long Island and the surrounding communities.”

State Sen. Elaine Phillips (R-Flower Hill) said the “foundation has now been laid to make Belmont Park a reinvigorated economic engine for our region, which will strengthen the already existing racing industry, and make Nassau County a destination location.”

Nassau County Executive-elect Laura Curran, a Democrat who takes office Jan. 1, said she was “excited to finally welcome the Islanders home to Nassau County, and I’d like to thank Governor Cuomo for helping make that possible. As county executive, I’ll make sure we work with the local community and stakeholders to make sure the area is developed with their input.”

Belmont first opened in 1905 and was last redeveloped 50 years ago. The state-run land is considered among Long Island’s most valuable real estate, with dozens of acres of underutilized parking lots bordering the Cross Island Parkway. The New York Racing Association plans to upgrade the existing park facilities next summer.

A handful of local groups, including the Parkhurst Civic Association and the Tudor Manor Civic Association, are considering filing a lawsuit to stop the project, said Matthew Sexton, a civic activist from Floral Park. They argue that ESD failed to follow state law requiring ESD to establish a community advisory council to address the community’s concerns about the development.

Opponents of the project want the state to build education, research or technology centers that would bring high-paying jobs to the area.

The Islanders began playing at Nassau Coliseum in the team’s first season in 1972. After years of trying to get a new arena built, the team left in 2015 to play home games at Brooklyn’s Barclays Center. The Brooklyn arena was not built for hockey, and the Islanders have been unhappy with the quality of the ice, the marketing of the team and the atmosphere for fans.

The Islanders or Barclays can opt out of their 25-year licensing agreement in January. The team is currently negotiating with Brooklyn Sports & Entertainment, which operates Barclays Center and Nassau Coliseum, on amending their lease.

The window for those negotiations, according to their lease, closes on Jan. 1 and both sides have until Jan. 30 to formally deliver “opt-out” notices, a formality at this point.

Islanders co-owner Jon Ledecky has said the team will continue to play at Barclays Center through next season as they are contractually obligated to do.

County officials have encouraged the Islanders to considering playing their homes games at the Coliseum, which underwent a $160 million face-lift, while the Belmont arena is under construction.

But NHL Commissioner Gary Bettman has insisted the overhauled Uniondale arena, which seats 13,900 for hockey and has no public transportation, is not viewed by the league “as a suitable option for the Islanders.”

A spokesperson for Brooklyn Sports & Entertainment said it will release a statement after a formal announcement.

Last year, ESD scrapped all proposals to redevelop Belmont, including a 25,000-seat soccer stadium for the New York Cosmos, after a long-delayed four-year process.

Curran hoping to throw a Game 5 watch party for the Islanders
Michael Kay talks candidly in podcast about radio ratings wars with WFAN
Hobbled Nets need a full team effort in Game 5
Best: Kenny Albert's Cup runneth over with Islanders memories
Lightning benefit from exploiting cap loophole with Kucherov
Peterson bounces back with terrific outing as Mets top Cubs
Didn’t find what you were looking for?