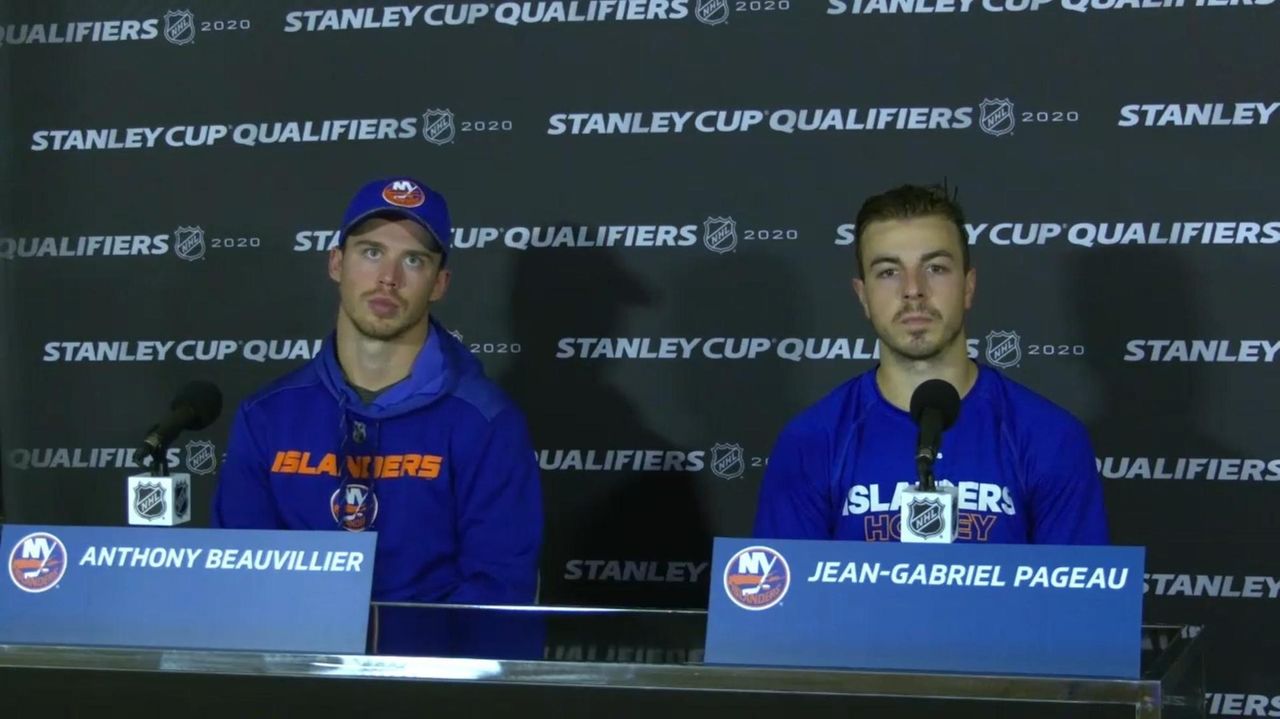 Islanders forward Jean-Gabriel Pageau talks about the undisciplined things the team did in a Game 3 loss to the Florida Panthers on Aug. 5, 2020. Credit: New York Islanders

It wasn’t just the Islanders’ costly undisciplined penalties, or their surprising reluctance to push the play up ice at times, or their turnovers. It was the cumulative effect that pushed their best-of-five qualifying series to a Game 4 and kept them from sweeping the Panthers.

“It was a little bit of a missed opportunity for us to knock them out,” Islanders coach Barry Trotz said. “They’re a very talented team and well coached. They’ve got some star power. We got a little bit away from our game. We’ve got to get back to our game.”

The Panthers won Game 3, 3-2, on Wednesday afternoon at Scotiabank Arena in Toronto, forcing Friday’s Game 4. It will be another noon start, like Wednesday and the Islanders’ 4-2 win in Tuesday’s Game 2.

“We want to come out and set the tone,” right wing Josh Bailey said. “We’re still in a good spot. You can’t dwell on things. You’ve got to make sure to turn the page.”

In NHL history only one team in 56 tries – the Islanders in 1985 – has rallied from a 2-0 series deficit in the best-of-five format.

Still, recognizing their flaws in Game 3 will be crucial to the Islanders in Game 4.

The Panthers went 2-for-5 on the power play – the Islanders were 0-for-3 – and snapped a 1-1 tie with two goals in the first 2:48 of the third period for their first two-goal lead of the series.

Mike Hoffman scored a power-play one-timer from the right circle to give the Panthers a 2-1 lead just 41 seconds into the period after goalie Semyon Varlamov (19 saves) was penalized for playing the puck out of the trapezoid.

Brian Boyle then scored the winner at 2:48 to give the Panthers a 3-1 lead after defenseman Devon Toews misplayed the puck.

“We just wanted to play a simpler game and a harder game,” Boyle said.

Eric Haula’s power-play goal at 4:02 of the second period to give the Panthers a 1-0 lead came after the Islanders were called for too many men. Scott Mayfield also took a first-period delay of game after flipping the puck over the glass and Derick Brassard (boarding) and captain Anders Lee (high sticking) took penalties in the offensive zone.

“We were turning the puck over,” Trotz said. “In playoff hockey, you’ve got to play north. We were playing slow, east-west. You end up on the wrong side of people and you wind up taking penalties.

“It was a lot of us not executing what we want to do today.”

“Five on five, we were fine,” Trotz said. “We had a number of chances two-on-one, odd-man rushes, looks in the slot. We just didn’t bury them today.”

The Islanders made it close on Brock Nelson’s goal at 18:33 of the third period with Varlamov off for an extra skater and Panthers defenseman Mackenzie Weegar having to retreat to the bench after his helmet popped off.

They had tied the game at 1-1 as Anthony Beauvillier – the Islanders’ best skater so far this series – pushed the puck deep into the Panthers’ zone as the rest of his line went for a change and he found Jean-Gabriel, coming off the bench, open in the right circle at 16:26 of the second period.

“We have a solid group, a lot of character,” Pageau said. “We have a really good group of leadership. I wouldn’t be surprised if we come back to the hotel and look at ourselves in the mirror and ask what we could’ve done better. That’s what I’m going to do.”

Irving scores 15 points in fourth quarter as Nets top Spurs
Islanders legend Clark Gillies dies at 67
Rangers fall behind early, can't catch up against Hurricanes
Islanders beat Coyotes for third straight win at UBS
Rangers' Georgiev leads off in goal in first half of back-to-back
Parcells believes Schoen is right man for job
Didn’t find what you were looking for?