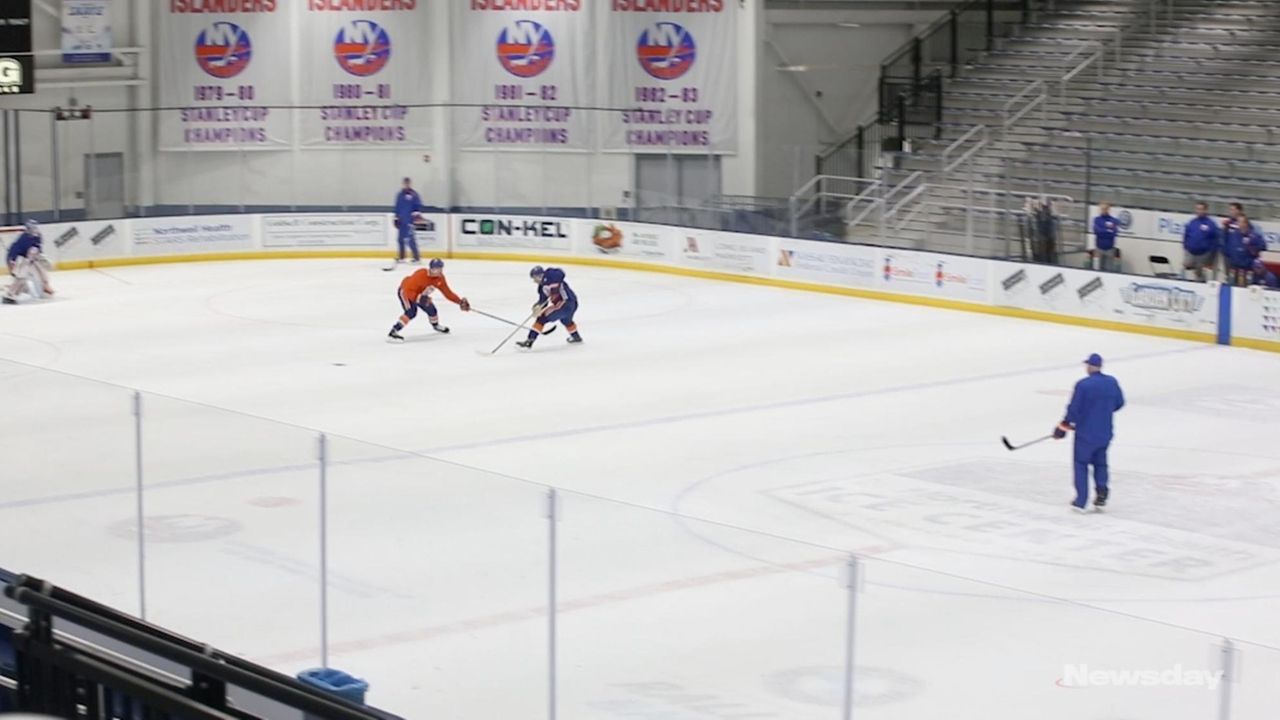 Islanders head coach Barry Trotz spoke Monday about how the team is gearing up for Wednesday's Game 1 of the first round of the Stanley Cup Playoffs against the Penguins. Credit: Newsday / Casey Musarra

The Islanders did the hard part in making the playoffs.

Succeeding in the playoffs is the harder part.

Their first-round opponent, the Penguins, won Stanley Cups in 2016 and 2017, beating Barry Trotz’s Capitals along the way both times, and still have a core of players from those championship squads — Sidney Crosby, Evgeni Malkin, defenseman Kris Letang and goalie Matt Murray, most notably.

“A lot of similar faces,” center Brock Nelson said Monday after the Islanders’ first playoff practice in East Meadow. “It’s a big challenge for us. Nobody really expected us to be here. We’ve kind of proven a lot of people wrong, and we’ll stick with the same mindset of that little chip to go out there and show that we deserve to be here and just play our game.

“In the playoffs, you’re going to have to beat the best and, right away, the Penguins.”

Game 1 is Wednesday night at NYCB Live’s Nassau Coliseum — the Islanders have home-ice advantage in a playoff series for the first time since 1988 — and Game 2 is Friday night before the series shifts to Pittsburgh for Game 3 Sunday afternoon and Game 4 Tuesday night.

The teams concluded their four-game regular-season series on Dec. 10, when the Penguins won a 2-1 shootout at the Coliseum.

This marks the fourth straight season Trotz will coach against the Penguins in a playoff series. The Capitals lost in the second round in 2016 (six games) and 2017 (seven games) before winning a six-game second-round series en route to their Cup.

“We know a lot about each other,” Trotz said. “We’re a little different from the Washington group, but systematically, we’re probably very similar.”

“I don’t see them changing their game that much going into a playoff series,” said Robin Lehner, the expected Game 1 starter, although Trotz said he would not reveal his goalie plans. “They’ve been there a lot before. They have a lot of good players, a lot of high-end talent and some of the best players in the league. I think their experience is invaluable. But we have the group of guys we have here and we’re going to stick to our game.

Crosby scored 100 points and leads a Penguins power play that finished fifth in the NHL at 24.6 percent. The Penguins have gotten healthier, too. Malkin returned for their next-to-last regular-season game after being out since March 16 with a rib injury, and Letang played the last five games after suffering an upper-body injury Feb. 23.

“They know what it takes to be successful in the playoffs,” said Islanders forward Tom Kuhnhackl, who played for the Penguins the previous three seasons. “They’ve shown it over the course of the last five, six seasons. It’s an exciting series for us. We’ve got to make sure we stay out of the penalty box. We’ve got to play physical against them. But we’ve got to play smart.”

Right wing Jordan Eberle said limiting turnovers and avoiding penalties are crucial for the Islanders. He said the biggest factor for the Islanders is just playing the same way they did in the regular season.

David Ortiz lone player elected to Baseball Hall of Fame
Will Stony Brook's move to CAA hurt in short term?
Daboll's background on offense could be selling point for Giants
First-time eligibles for the Baseball Hall of Fame Class of 2023
Randle's struggles, Barrett's ascent may signal Knicks' leadership shift
Goodrow's versatility comes in very handy for Rangers
Didn’t find what you were looking for?