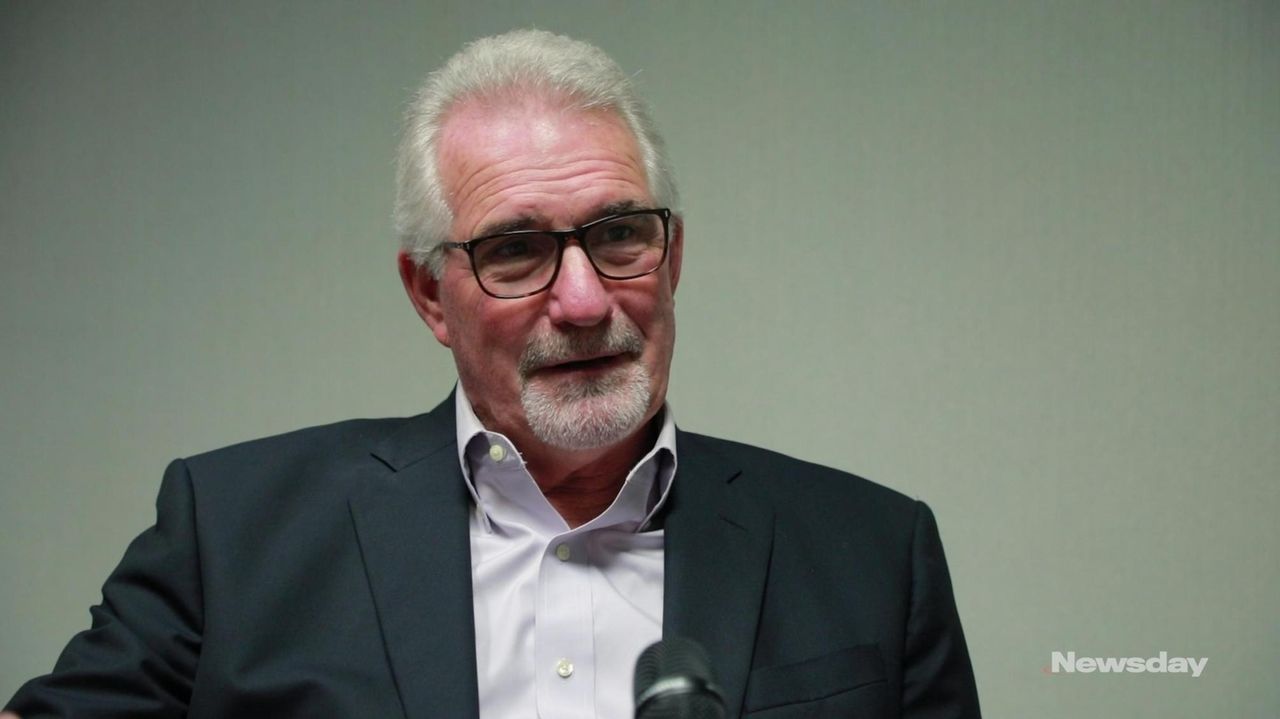 While at Newsday's Melville headquarters on Monday for a "Newsday Live" event, Islanders stars Clark Gillies and Butch Goring talked about the team's chances as they are set to begin the playoffs at NYCB Live's Nassau Coliseum against the Penguins on Wednesday and compared the way team president Lou Lamoriello is running the team with their experiences with coach Al Arbour. Credit: Newsday / Yeong-Ung Yang

The Islanders surpassed everybody’s expectations but their own to secure home-ice advantage in a playoff series for the first time since 1988.

The majority opinion when it comes to playoff predictions again has the Islanders, who finished second in the Metropolitan Division, as underdogs to the third-place Penguins, who won back-to-back Stanley Cups in 2016 and 2017.

But one way the Islanders, who conducted their second playoff practice on Tuesday in East Meadow, can again prove their doubters wrong is by taking full advantage of that home-ice advantage. Game 1 is at cozy NYCB Live’s Nassau Coliseum on Wednesday night.

“You have to,” said defenseman Johnny Boychuk, a member of the Bruins’ Stanley Cup champions in 2011. “Every building is going to be tough to play in. You come into the Coliseum, it’s very electric and loud. The fans are going to be loud. We’ve got to take advantage of it and it is an advantage. You’ve got to use it.”

The Islanders were 12-7-2 in their regular-season return to the Coliseum as they split their home schedule with the Barclays Center, where all subsequent playoff rounds would be played.

But why waste the advantage?

“We did a good job of getting in and now we’ve got to take advantage of it,” defenseman Ryan Pulock said. “We’ve got an opportunity here to start out at home and get a good start to the series and create that momentum in the series. It’s a long series and anything can happen. We’ve got to take advantage of every opportunity we get and starting here at home with two games is an advantage that we can look to take care of.”

Game 2 is Friday night at the Coliseum, which would also host Game 5 on April 18 and Game 7 on April 22, if necessary. The Coliseum has not hosted a Game 7 in the NHL playoffs since the quarterfinals in 1978, when the Islanders lost to the Maple Leafs, 2-1, in overtime.

Coach Barry Trotz knows not all is lost for the Islanders if they stumble out of the gate at home.

He led the Capitals to the Stanley Cup last season but the Capitals lost the first two games of their first-round series with the Blue Jackets in overtime at home before winning the next four to advance.

“We lost our first two home games and that was the best thing for us,” Trotz said. “We got some focus. Not that we weren’t focused, but we dug in and we had to do it on the road. It’s about getting to four. It’s not about tomorrow night’s game. Win or lose, it’s not going to win you a series. It’s just one step into it. That’s how you have to approach it. You’ve got to have a short-term memory. You can’t look back. You’ve got to look forward because whatever happens, you can’t undo.”

At this point, the Islanders just want to look forward to playing games. They’ve had two days of practice and concluded their regular season with a 3-0 win at Washington on Saturday.

“It just gives you time to refocus,” right wing Jordan Eberle said. “It’s always a tough couple of days because you’re so anxious.”

Yet Trotz’s message to his team is just relax.

“Have fun,” Trotz said. “It’s supposed to be fun. I don’t think anybody thinks a whole lot of us. They haven’t all year. We’ve just got to prove people wrong. It’s what we’ve tried to do.”