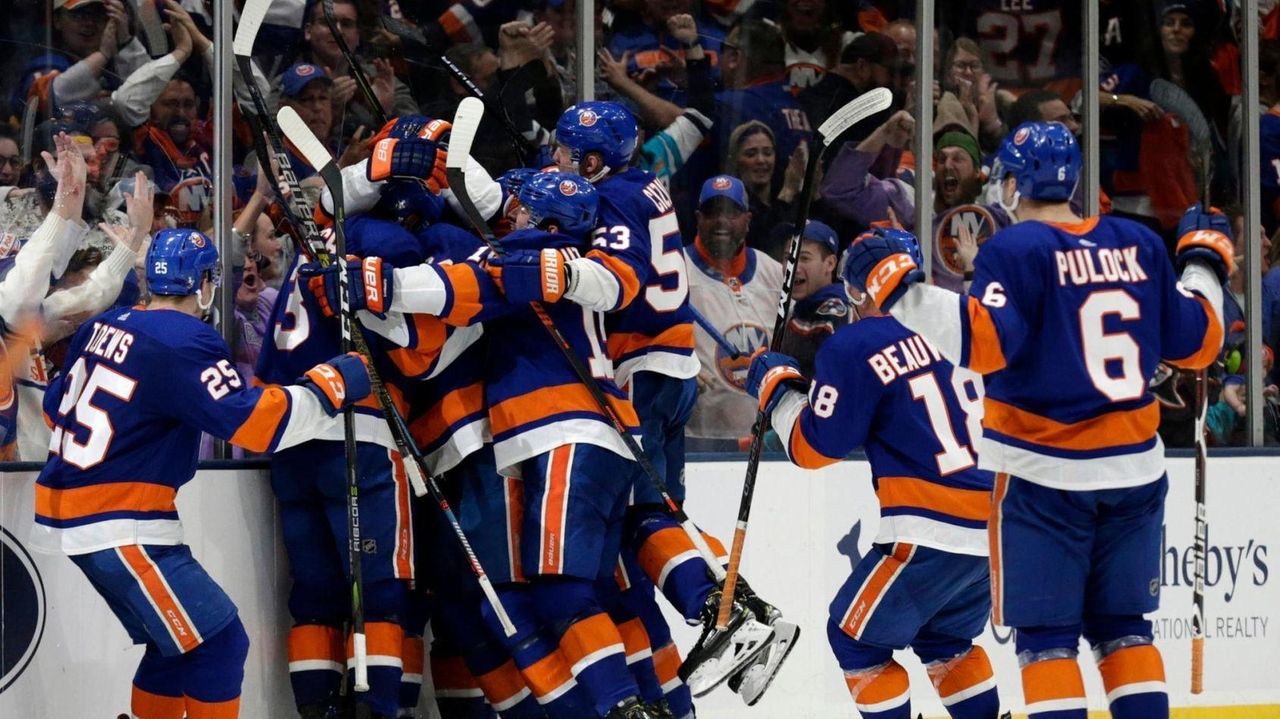 After the Penguins scored late in the third period to tie the game at 3-3, Josh Bailey scored in overtime to give the Islanders a Game 1 victory in the Eastern Conference quarterfinals on Wednesday at NYCB Live's Nassau Coliseum. Credit: Newsday / Robert Cassidy, Shelby Knowles; Photo Credit: Jim McIsaac

NYCB Live’s Nassau Coliseum has seen its share of memorable playoff games. So, it was fitting that the much-anticipated postseason return after four years to the venerable barn added one that could be added to the list.

That’s how the deliriously happy Islanders fans who comprised the sell-out crowd of 13,917 will think of Wednesday night’s 4-3 overtime win over the Penguins in Game 1 of their first-round series.

Josh Bailey will just remember how he avoided bad dreams.

His overtime winner at 4:39 off Mathew Barzal’s stop-and-start set-up move at the crease allowed him to forget hitting the post with his deflection of Cal Clutterbuck’s feed with two seconds remaining in regulation.

That came after the Penguins, with goalie Matt Murray (29 saves) pulled for an extra skater, tied it at 3 on Justin Schultz’s goal from the left at 18:31 of the third period.

“That’s playoff hockey for sure,” Bailey said. “Both teams went at it and it was a back-and-forth game. We had to battle a bit of adversity and shake it off. [Hitting the post] was tough to shake. I was afraid I’d have to see that one in my nightmares for a little while. It was a little bit of redemption. It’s a crucial win. There’s still a long way to go.”

Game 2 is Friday night at the Coliseum.

Robin Lehner, in his third career playoff game and first since 2013, stopped 41 shots for the Islanders.

“For the most part, playoff hockey has a lot of ups and downs,” said defenseman Nick Leddy, whose floater from the blue line gave the Islanders a 3-2 lead at 12:35 of the third period. “Once you get momentum, you want to keep it as long as possible.”

The Islanders never trailed against the Penguins as they held Sidney Crosby to just two shots in his 22:43. But the Penguins, who won back-to-back Stanley Cups in 2016 and 2017 while Crosby and Evgeni Malkin were both part of teams that won the Cup in 2009 and was a Cup Finalist in 2008, came back from one-goal deficits three times.

Finally, though, Bailey’s goal won it as the third time was a charm for the Islanders in terms of video reviews.

Ex-Penguin Tom Kuhnhackl had a goal overturned because he played the puck in the offensive zone before teammate Matt Martin cleared it just 33 seconds into the first period.

Then Kuhnhackl came crashing into Murray as the puck crossed the line at 1:12 of overtime, but it was ruled the net came off its mooring first.

Bailey’s goal was also reviewed to see if the Islanders were offside.

“It definitely had some ups and downs,” Barzal said. “In overtime, Kuhnhackl’s took a while and we kind of didn’t know at that point. It was 50-50. But it didn’t affect us.

Barzal called it “back-and-forth” but quickly clarified he didn’t mean the Islanders want to get into run-and-gun games with the high-powered Penguins.

“In the second period, we got away from our game,” said Barzal, who had four shots and the assist on Bailey’s winner in 15:22. “They were definitely controlling the pace.”

Despite Kuhnhackl’s overturned goal in the first period, the Islanders took a 1-0 lead for real at 1:40 as Jordan Eberle, open at the right post, knocked in the rebound of defenseman Adam Pelech’s point shot. Phil Kessel tied the score at 1 at 5:42, temporarily silencing the raucous crowd, as he beat Lehner from the slot after Casey Cizikas had fallen in the neutral zone.

Brock Nelson’s power-play goal at the crease off Eberle’s feed at 15:46 of the second period gave the Islanders, who entered the playoffs 3-for-50 (6.0 percent) on the man advantage over their last 22 regular-season games, a 2-1 lead.

Leo Komarov’s needless offensive-zone holding penalty led to Evgeni Malkin’s power-play goal to make it 2-2 at 13:41 of the second period as his shot from the right circle went over Lehner’s far shoulder after deflecting off Pelech.

“I thought we just stayed to it,” Islanders coach Barry Trotz said. “I liked our composure on the bench. There was a lot of twists and turns to the game, disallowed goals. A lot of stuff.”

Game 1: Islanders vs. PenguinsThe Islanders defeated the Pittsburgh Penguins, 4-3, in overtime, in Game 1 of their Eastern ...