Ross Johnston of the Islanders fights Micheal Haley of the Rangers during the first period at Madison Square Garden on Monday. Credit: Jim McIsaac

It would be easy to say the Islanders had no fight left after the fights, because the Rangers’ game took off following the back-to-back bouts early in the first period.

The scoreboard certainly reflected that. After scoring in the game’s opening minute, the Islanders yielded six straight goals in their 6-2 loss on Monday night at Madison Square Garden.

But really, it was the Islanders’ repeated turnovers, which led to repeated odd-man rushes, and a general inability to keep the Rangers away from the crease that doomed the Islanders (27-13-4) in their fourth loss in six games. Rangers playmaker Artemi Panarin had two goals and three assists.

Coach Barry Trotz finally pulled a beleaguered Semyon Varlamov and replaced him with Thomas Greiss at 10:15 of the third period after Varlamov allowed six goals on 35 shots. 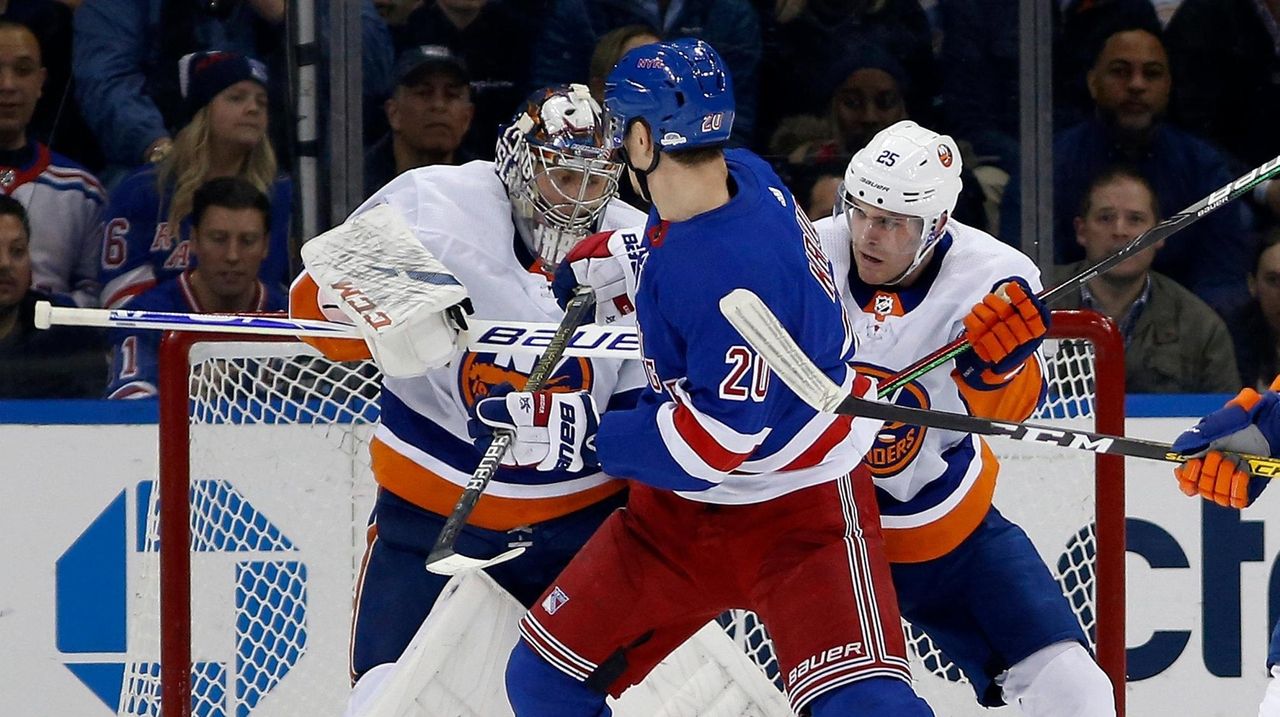 “Puck management was terrible,” Trotz said. “Their top guys were better than some of our top guys and I thought our level of battle wasn’t where I expected it to be. We got what we deserved.”

“It hurts, especially in a game like this, because it’s a rivalry and a divisional game,” said Brock Nelson, whose power-play goal at 12:48 of the third period capped the scoring. “We keep talking about how tight the standings are and how much points matter. To have a game like that, it’s not ideal.”

The third-place Islanders are three points behind the second-place Penguins in the Metropolitan Division and two points ahead of the fourth-place Hurricanes.

The Islanders fell to 13-8-2 against teams not in a playoff position, the Rangers included.

“It’s something that shouldn’t happen from us,” defenseman Ryan Pulock said. “Every team in this league is good, but when you’re trying to fight for the playoffs, and it being so tight in our division, we’ve got to put together a better effort in some of those moments.”

The Islanders have another one on Tuesday night against the Eastern Conference-worst Red Wings at the Coliseum.

The Islanders and Rangers, who met for the first time this season, will play each other three times in nine days, with a rematch on Thursday night at NYCB Live’s Nassau Coliseum.

The Islanders were without invaluable fourth-line center Casey Cizikas, who was struck in the groin by David Pastrnak’s power-play shot Saturday in a 3-2 overtime loss to the Atlantic Division-leading Bruins at Barclays Center. Fourth-line left wing Matt Martin was issued a game misconduct at 2:13 of the first period. He fought Brendan Smith before the ensuing faceoff after Ross Johnston dropped the gloves with Micheal Haley.

“You can’t use that as an excuse,” said Jordan Eberle, who gave the Islanders a 1-0 lead 18 seconds into the game with his second goal in three games and fifth of the season. “You can break down pretty much every one of their goals and I’m sure most of them started with the puck on our stick.”

Notes & quotes: Center Otto Koivula and defenseman Sebastian Aho, both called up from the Islanders’ AHL affiliate in Bridgeport on Monday, were the healthy scratches . . .  Eberle played in his 700th NHL regular-season game . . . Greiss is expected to start against the Red Wings.

Panarin has five points as Rangers dominate IslesThe star forward, who chose the Rangers over the Isles in the summer, has two goals and three assists and LI's Adam Fox has a goal and an assist as the Blueshirts triumph in the rivals' first meeting of the season. Isles-Rangers game photosThe Rangers beat the Islanders, 6-2, on Monday, Jan. 13, 2020, at Madison Square Garden.