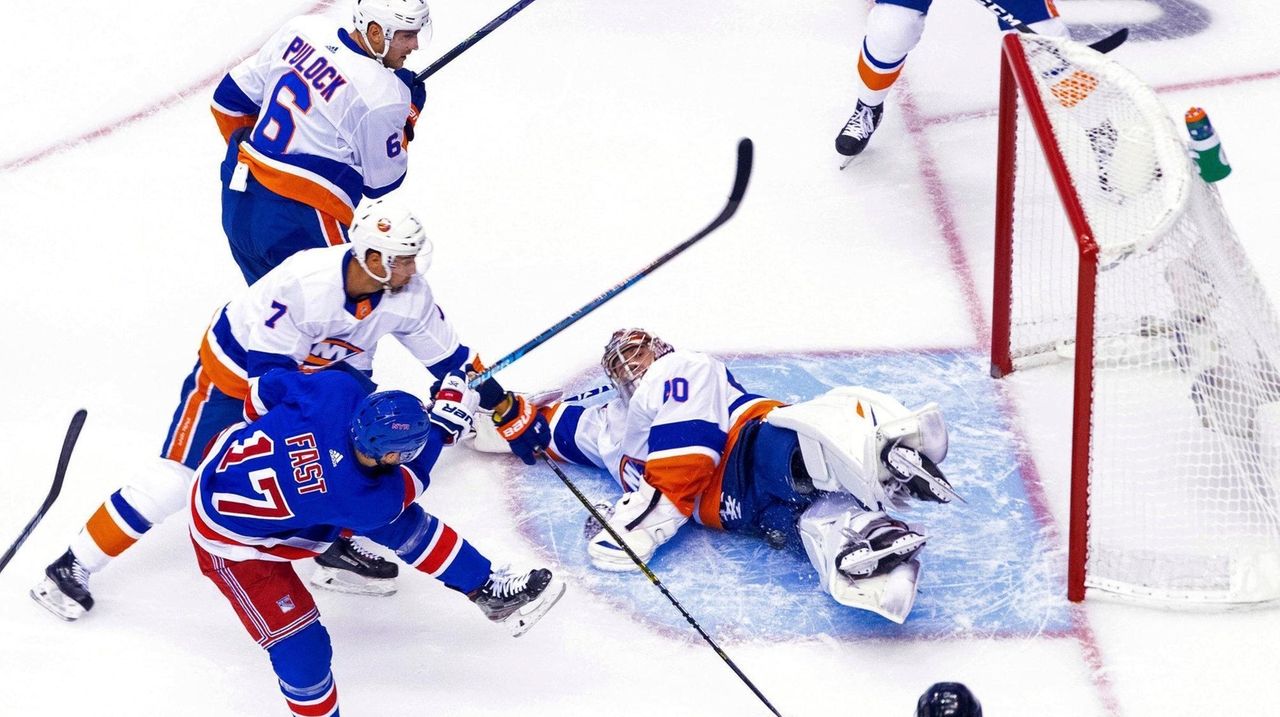 The Rangers and Islanders played a hockey game for the first time since March in an exhibition game in Toronto on Wednesday night. The Isles jumped out to a 2-0 lead and held on for a 2-1 win. Credit: NHL

Semyon Varlamov seemingly made Barry Trotz’s decision on a No. 1 goalie rather easy with his shutout work over two periods in the lone exhibition game. Andy Greene and Noah Dobson are doing their best to make it very hard on the Islanders coach to choose his top six — or seven — defensemen.

“I really wanted to see them against some competition other than their own teammates,” Trotz said of Greene and Dobson after the Islanders topped the Rangers, 2-1, on Wednesday night at Scotiabank Arena in Toronto. “It’s a tough decision for the coaching staff to separate them.”

The Islanders open their best-of-five qualifying series against the Panthers on Saturday and Trotz said he could dress seven defensemen and just 11 forwards for Game 1.

Wednesday night marked the Islanders’ first game since a 5-4 shootout loss at Vancouver on March 10. The NHL paused its season two days later in response to the COVID-19 pandemic.

Isles vs. Panthers: Jones, Burke preview series Keith Jones and Brian Burke preview up the Islanders vs. Florida Panthers NHL Stanley Cup playoff qualifying series, pointing out that the Panthers' stars will have to start playing better, and Sergei Bobrovsky will need to stand on his head.

“With being off for whatever, four and a half months, and being that everyone is healthy back there, it’s a competition,” Greene said. “It’s out of my hands at this point and we’ll go from there.”

Allowed two extra players for the exhibition game, Trotz dressed eight defensemen to get both Greene, the former Devils captain acquired on Feb. 16 with Adam Pelech thought to be lost for the season after rupturing his Achilles tendon on Jan. 2, and Dobson, a rookie, into the lineup. Both had assists and were strong in the defensive end. Greene also saw time on the 3-for-3 penalty kill.

Pelech, too, was steady in his return as he was reunited on the top pair with Ryan Pulock.

“He looked pretty seamless jumping in there,” Trotz said. “He made a couple of good reads, some good exits. He defended well on the penalty kill. He looked set.”

Besides figuring out which defensemen to dress, Trotz must choose between Varlamov and Thomas Greiss and also settle on a 12th forward.

Varlamov would seem to be the choice after stopping all 19 shots he faced in two periods. That included stoning Jesper Fast on three straight, point-blank shots, stacking his pads to stop the last one at 4:32 of the second period.

“I haven’t tried it for the last 15 years, probably never,” Varlamov said of his acrobatics. “Sometimes, you’ve got to do what you’ve got to do. Old school never gets old.”

Greiss stopped seven of eight shots in the third period.

As for settling on his forward lines, Trotz started Anthony Beauvillier on Brock Nelson’s left wing along with Josh Bailey, leaving a spot on Jean-Gabriel Pageau’s line with Derick Brassard. Trotz opted to use burly but strong skating Ross Johnston while scratching wings Andrew Ladd, Tom Kuhnhackl, Michael Dal Colle and Leo Komarov, who missed most of training camp with a facial injury.

Johnston had a secondary assist on defenseman Devon Toews’ far-side wrister past Henrik Lundqvist to give the Islanders a 2-0 lead at 15:35 of the third period.

Beauvillier had made it 1-0 at 9:15 of the second period as he kept the puck on a two-on-one with Nelson and beat Igor Shesterkin to the short-side after Greene fed him with a pinpoint stretch pass.

“I thought the pace was good,” Beauvillier said. “We had really good pace in the scrimmages back home. Today, we did a good job of moving the puck quick. The shots were in the windows a little bit but we’re going to get that back quick.

The Islanders were outshot, 27-22, and went 0-for-5 on the power play with just four man-advantage shots.