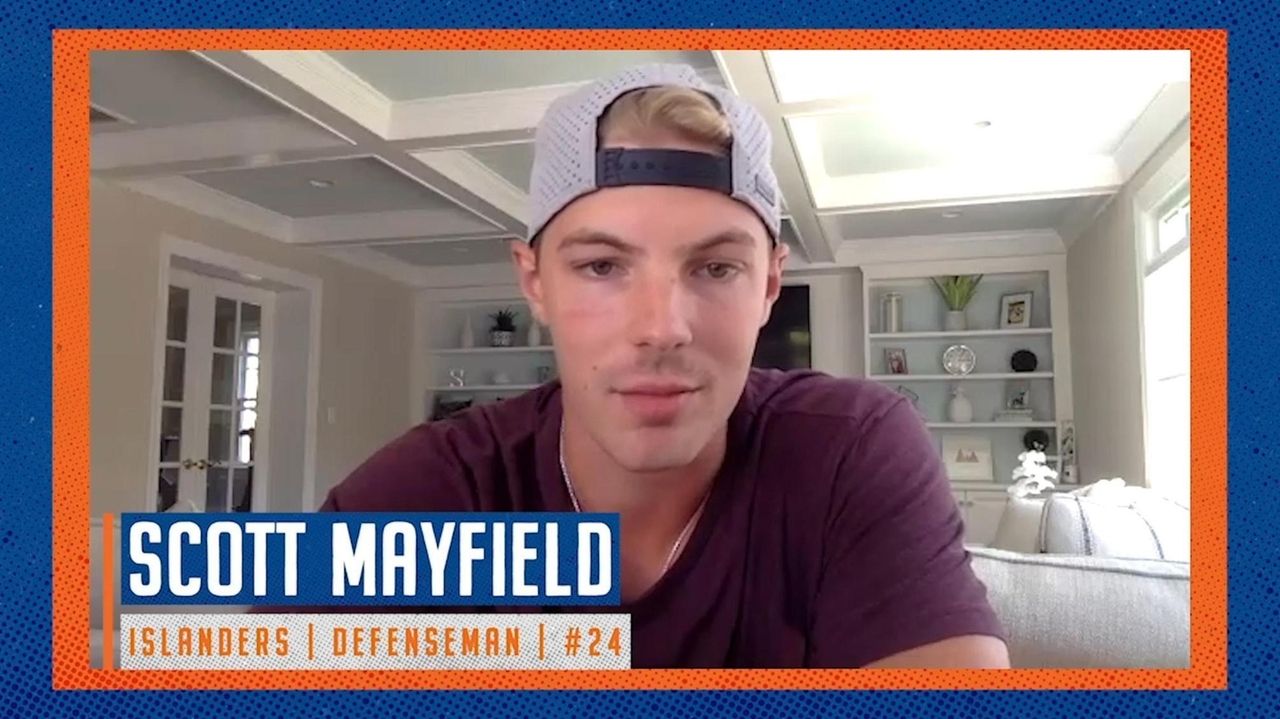 Islanders defenseman Scott Mayfield, speaking on a Zoom call after a workout on Monday, said he believes there will be a resumption of games but understands if other players are cautious or reticent. Credit: New York Islanders

The NHL is forging ahead with its return-to-play plans, expanding the number of players allowed in the voluntary small-group workouts and now allowing coaches on the ice as well. Still, the COVID-19 pandemic allows no certainties and this weekend’s news that the Tampa Bay Lightning had to close their practice facility after three players and additional staff members tested positive was a stark reminder.

Islanders defenseman Scott Mayfield still believes there will be a resumption of games but understands if other players are cautious or reticent.

“That’s a tough question,” Mayfield said on a Zoom teleconference with the media on Monday when asked for his level of confidence. “For me, it was kind of a roller coaster. It didn’t seem like much was going on and then we get back on the ice and I got really excited. Then, you see what happened over the weekend.

Mayfield has been skating at the Northwell Health Ice Center in East Meadow with a group that includes goalie Christopher Gibson and fellow defensemen Devon Toews, Noah Dobson, Thomas Hickey and Adam Pelech since the NHL entered its Phase 2 of reopening on June 8. Formal training camps are set to open on July 10.

The NHL will expand the maximum number of players allowed to train together from six to 12 on Tuesday. And Mayfield said Monday was the first day coaches were on the ice to work with the players. Assistant Jim Hiller worked with Mayfield’s group.

“It helps the practice move along and you don’t have to worry about setting up drills,” Mayfield said.

But Mayfield understands the work he’s putting in now may just turn out to be summer training if play cannot resume. The NHL and the NHL Players Association still must work out the final financial details of the return-to-play agreement and a spike in the coronavirus could alter plans.

The NHL is on the cusp of selecting two hub cities to quarantine 12 teams each. The seventh-seeded Islanders will face the 10th-seeded Florida Panthers in a best-of-five qualifying series to earn a berth in the 16-team playoffs.

“We all want to play,” Mayfield said. “I want to play to win a Stanley Cup. The layout we have, any team can win it and we’ve got just as good a chance, if not better, than anyone.

“I hope we can get back and play,” Mayfield added. “Now, I know there’s a lot to figure out. I know it’s a financial obligation. It’s health reasons. There’s just so many boxes that need to be checked.”

Mayfield acknowledged the coronavirus outbreak at the Lightning facility – and the plethora of reported positive tests in the other professional sports and college football the past week – has made some fellow players nervous.

“Over the weekend, I think there was maybe a little bit of concern that kind of popped up in people’s minds,” Mayfield said. “I haven’t talked to enough guys to really know the answer to that. I could see the guys’ ideas are shifting a little bit. But, at the same time, I look at it from a standpoint that we can start up whenever. I don’t know when is the perfect time to start up. I don’t know if anyone has the answer to that, or else, it’d probably be happening.”

Draft lottery upcoming. NBC Sports Network will air Phase 1 of the NHL draft lottery on Friday at 8 p.m. The Red Wings, Senators (with two spots), Kings, Ducks, Devils and Sabres are the participating teams while the next eight slots will be filled by the losing teams in the qualifying series.