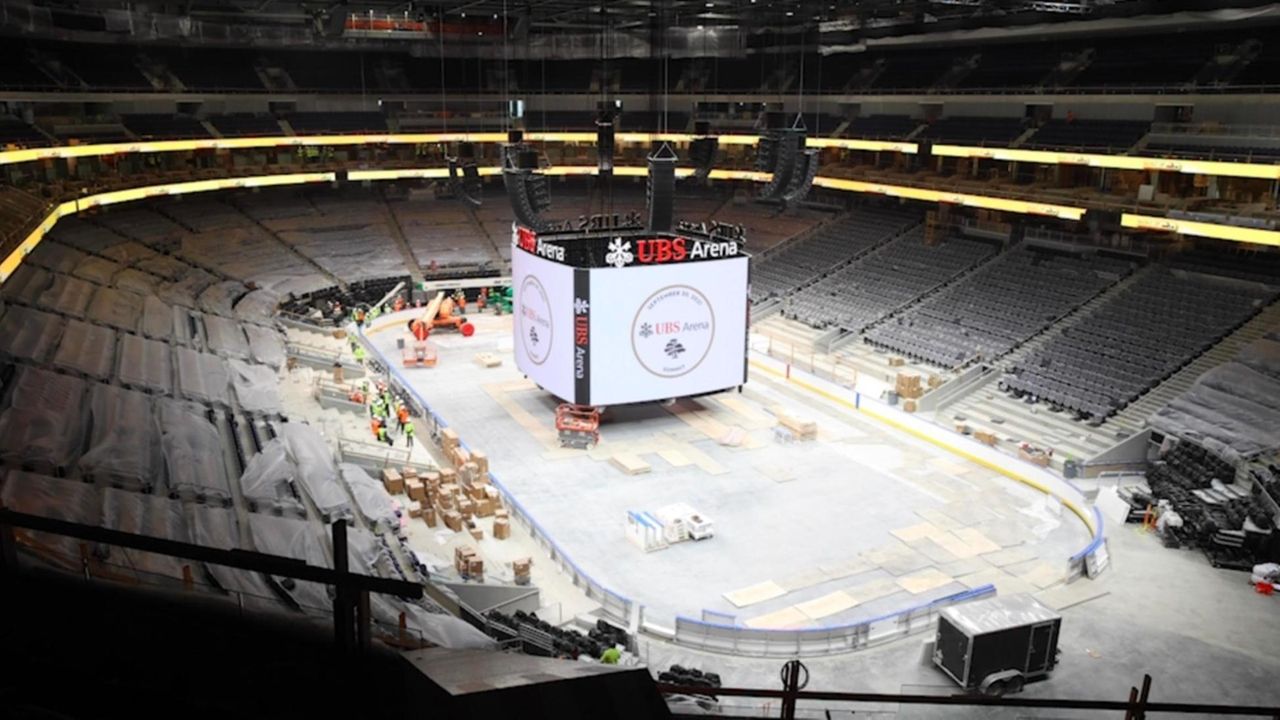 The Islanders are getting a new home, and in 51 days they are scheduled to play their first game at the new UBS Arena at Belmont Park. Steve Langford reports. Credit: Howard Schnapp; Newsday file footage

A group of construction workers ending their shift walked past Tim Leiweke just as the Oak View Group CEO was about to lead a tour group into UBS Arena. They assured their boss the Islanders’ new home would be ready by its November target date, if not a little bit sooner.

That was also the message Leiweke and NHL Commissioner Gary Bettman conveyed to approximately 500 people attending a UBS Arena summit — a full day of panel discussions and a building tour — at Belmont Park on Thursday. Bettman added UBS Arena would eventually host both an NHL Draft and All-Star weekend.

"This building is state of the art and, frankly, no expense has been spared," Bettman said of the $1.1 billion arena. "People are going to like being there."

The building is scheduled to open on Nov. 19 with a private charity concert. The Islanders’ home opener is Nov. 20 against the Calgary Flames and Leiweke teased an opening concert by an act he described as one of the world’s biggest as it concludes a tour. Leiweke did not specify who was booked but the last scheduled date on the Rolling Stones’ current tour just happens to be Nov. 20.

But, the panelists stressed, UBS will be a hockey-first arena that hosts concerts.

Bettman said the move into UBS Arena after playing at antiquated Nassau Coliseum, with a brief stop at Barclays Center in Brooklyn, will "assure the Islanders will be a strong franchise forever."

Malkin, who rarely makes public appearances on behalf of the Islanders, said during the panel discussion that, "In the end, any team is only about the fans. Owners are just stewards of the community trust. This arena is for the fans."

Malkin later added, "There is an Islander way on ice and an Islander way in terms of vision from our fans. This arena is for every fan. It’s a shared experience. The Islanders are a community team."

UBS Arena, which will hold 17,500 for hockey despite a ceiling, at 93 feet, just three feet higher than the Coliseum, still looks very much like a construction zone. But Leiweke said shifts have been added and work is proceeding seven days a week. All construction material is either on site or scheduled for delivery.

Black ice has been put down and the painted ice the Islanders will play on will be laid on Oct. 13-14. Most of the seats have been installed.

But as for when UBS Arena will host two of the NHL’s signature events, Bettman did not specify a timetable for awarding the draft and All-Star Game to Long Island.

"I spent a lot of time today with Scott and I want the entire area developed and done so that we can show it all off in its full grandeur," Bettman said. "It’ll be very shortly after the entire project is completed."

A shopping mall and hotel are also planned, though construction has yet to start on either. A parking garage with 1,500 spaces near the arena is nearly complete. There will also be 4,000 additional outdoor parking spaces.

Leiweke believes construction on the shopping mall could begin in early 2022.

"I hope we don’t have to wait for all of that to get done in order to host some of these events," Leiweke said. "But the reality is, even if we had to wait, it won’t be long because I think roughly two years from the start of the retail, that’ll get done. With or without a hotel, it doesn’t really matter. I think we’re ready to go at that point."

Lennon: Boone's willingness to go along with front office is key
5 keys for the Knicks entering the NBA season
Thibodeau likes versatility of Knicks to play multiple positions
Chytil gets opportunity to make impression on second line
Knicks preview: Less defense, more offense, high expectations
Nets preview: How will team replace Irving's production?
Didn’t find what you were looking for?