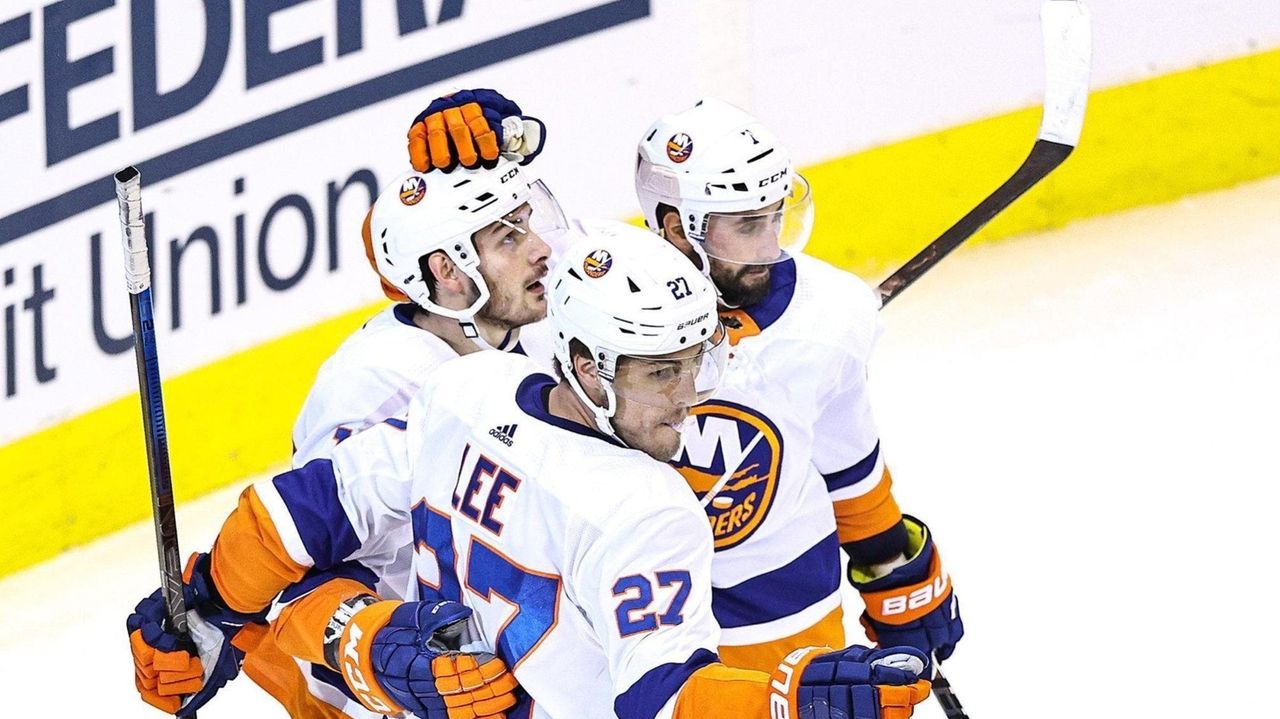 Anders Lee, Jan-Gabriel Pageau and Barry Trotz on Wednesday talked about their third-period rally in their 4-3 overtime loss in Game 2 of the Eastern Conference semifinals against the Flyers.. Credit: NHL

The Islanders could be buoyed by their resiliency in responding to a three-goal deficit. Or, they could be deflated their comeback was ultimately for naught as the Flyers evened their second-round series with a 4-3 overtime win on Wednesday afternoon in Game 2 at Scotiabank Arena in Toronto.

It won’t take long to find out. A pivotal Game 3 is Thursday night.

“I would probably say a loss is a loss and we’ve got to put it behind us and focus on tomorrow’s game,” said Islanders coach Barry Trotz, who had called his team just “average” after a strong start in Monday’s 4-0 Game 1 win. “It’s a swing game.”

The Islanders spotted the Flyers three first-period goals as postseason hero Semyon Varlamov, coming off back-to-back shutouts, was pulled for Thomas Greiss. But they battled back with two goals in the third period to force overtime before defenseman Philippe Myers’ shot deflected off captain Anders Lee’s stick shaft for the winner at 2:40 of the extra period.

The Flyers, who got 31 saves from a very sharp Carter Hart, still have not lost consecutive games since completing a 1-4-1 road trip on Jan. 7.

“When you lose Game 1 and your next two games are back-to-back, Game 2 is a pretty important game,” said Flyers center Kevin Hayes, who scored twice in the opening 9:43, both on short-side shots on odd-man rushes against Varlamov. “Today was probably the most important game of the season. We responded. We have a back-to-back and it’s an overtime win. We’re feeling good about ourselves but they’re obviously going to come hard tomorrow.”

That’s actually how the Islanders started playing midway through the second period.

By then, though, Varlamov, who has started all 11 postseason games for the Islanders and ran his playoff shutout streak to a team record 138:17 before Hayes beat him on the Flyers’ first shot at 1:57 of the first period, was on the bench.

Greiss, in his first game that counted since a 3-2 overtime loss to the Hurricanes on March 7 at NYCB Live’s Nassau Coliseum, stopped the first 20 shots he faced before Myers’ winning goal.

Trotz said he was looking for a “spark” and that the Islanders’ defense did not support Varlamov. Still, it appeared Varlamov could have stopped both Hayes’ second goal at 9:43, which slipped under the goalie’s right arm, and Sean Couturier’s goal at the crease after muscling around defenseman Nick Leddy to make it 3-0 at 15:09 of the first period and end Varlamov’s outing.

“Any time you have a back-to-back, that’s obviously a thing,” Lee said. “You have to move on from tonight. This one stings a little bit because we worked so hard to get back. But there’s no other choice but to look on to tomorrow and regroup and try to recover. You’re going to face adversity at times and I think we faced it a little bit tonight and overcame a little bit of it. We were a little bit short.”

Lee’s power-play goal at 11:45 of the second period as he boxed out defenseman Matt Niskanen at the crease to deflect Mathew Barzal’s feed from the right, brought the Islanders within 3-1.

Anthony Beauvillier, getting the puck back from Josh Bailey after carrying it to the Flyers’ blue line, brought the Islanders within 3-2 at 11:11 of the third period.

Jean-Gabriel Pageau tied it at 3-3 at 17:51 of the third period. Flyers coach Alain Vigneault challenged that Brock Nelson was offside, but the call stood, which resulted in a minor penalty to the Flyers but the Islanders couldn't capitalize on the ensuing power play.

“You want to complete the comeback, that’s the disappointing part,” Trotz said. “The positive part is it reinforces a lot of the things you do to get back in the game.”

Best: Now comes test of Islanders' resilienceOne school of thought is that failed comebacks can breed confidence. But another is that they are more difficult to recover from than a complete flop that can be dismissed quickly. Game 2: Islanders vs. FlyersSee the scenes from Toronto as the Isles fell to the Flyers in Game 2 of their Eastern Conference semifinal series. Isles on their third-period rally in Game 2 OT lossAnders Lee, Jan-Gabriel Pageau and Barry Trotz on Wednesday talked about their third-period rally in their ...