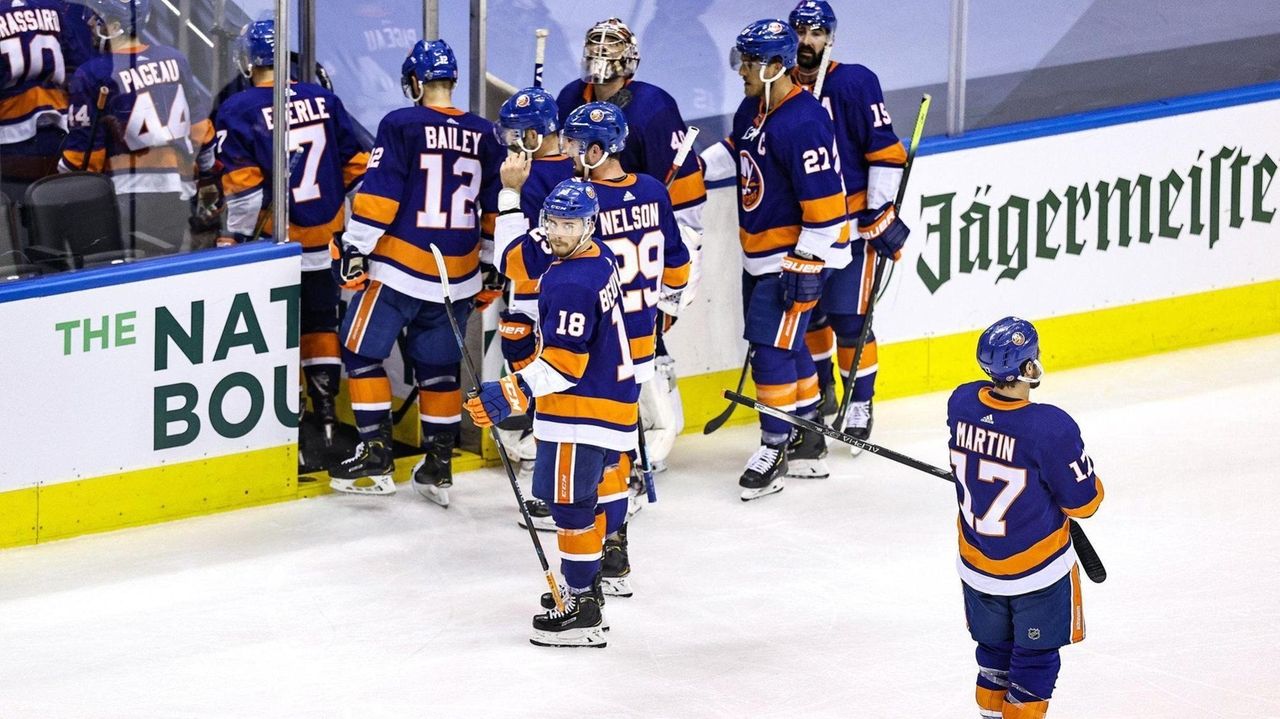 Mathew Barzal, Anders Lee, Matt Martin, Derick Brassard and Barry Trotz discussed the Islanders' Game 6 loss to the Philadelphia Flyers in double overtime, as well as how they've already put the frustrations of the loss behind them as they focus on Saturday's deciding Game 7. Credit: Newsday

That first berth in a conference finals since 1993 is still out there, still waiting for one more Islanders victory. But to earn that spot and avoid seeing their season end, they now must dig deep.

Not only have they lost a 3-1 series lead in their second- round matchup with the Flyers, but they lost the third-longest game in franchise history, 5-4, in double overtime in Thursday night’s Game 6 at Scotiabank Arena in Toronto despite a 53-31 shot advantage.

All three of their series losses have come in overtime as the Flyers also won Games 2 and 5, 4-3.

“You drop two in overtime, you’ve got to move on and really just focus on Game 7,” Anders Lee said. “You can’t dwell on these too much.”

Game 7 is Saturday at 7:30 p.m. The winner will face the Tampa Bay Lightning in the Eastern Conference finals.

Defenseman Ivan Provorov’s shot beat goalie Semyon Varlamov at 15:03 of the second overtime. It went through a screen and off Islanders defenseman Scott Mayfield, who had broken his stick in the Flyers’ zone.

“We’re just focused on the next one here,” said Matt Martin, who tied the score at 2 at 1:24 of the second period after the Flyers built an early two-goal lead. “I liked our game tonight. Playoff hockey will challenge you physically, emotionally, mentally.”

“The frustration level is honestly about 30 seconds,” said Mathew Barzal, who had a goal and an assist with a heavy bandage covering stitches over his right eye after Claude Giroux’s high stick forced him from Game 5. “Then that’s about it. There’s nothing we can do. Game 6 is over now. We’ve moved on. It’s an unfortunate play at the end, but it happens.”

The Islanders killed off two Flyers power plays in the first overtime — defenseman Travis Sanheim negated the second one after 42 seconds with a hook on Casey Cizikas — and goalie Carter Hart had to make in-tight saves on Barzal and Lee.

“You have to give them credit, especially their goalie. He’s been playing good,” said Derick Brassard, whose redirection at the left post of Devon Toews’ feed three seconds after the Islanders’ second power play expired brought them within 2-1 at 16:33 of the first period. “We’ve got to go to the net and get some ugly ones. Our effort was there tonight. This is the playoffs. Those games are always close. It didn’t go our way tonight.”

The Islanders took a 4-3 lead on Barzal’s goal with 29.2 seconds left in the second period and had a chance to take firm control after Kevin Hayes was called for slashing Jordan Eberle at 7:50 of the third period. But the Islanders could not muster a shot on the man advantage — and were 1-for-6 on the power play in the game — and Scott Laughton was sprung for the tying goal at 9:53 off Toews’ giveaway.

The Islanders’ power play also didn’t come through after defenseman Justin Braun stuck out his leg to trip Martin at 17:18 of the third period, though Hart had to stop defenseman Ryan Pulock’s hard blast and Lee’s two rebound tries at the net. Eberle, who had missed on a first-period breakaway, then shot a third rebound try off the side of the net.

The Islanders took a 3-2 lead at 3:06 of the second period on Lee’s power-play goal on a rebound as Barzal deliberately “passed” the puck off Hart’s pad.

Michael Raffl’s rebound at the right post of Nicolas Aube-Kubel’s initial shot allowed the Flyers to tie the score at 3 at 13:21.

The Flyers opened a 2-0 lead on goals 96 seconds apart in the first period. Hayes made it 1-0 at 10:16 as he took a feed in the low slot from Travis Konecny after Lee had his backhanded clearing attempt intercepted by defenseman Robert Hagg.

James van Riemsdyk, off an offensive-zone turnover by the Islanders that Giroux turned into a transition rush, surprised Varlamov with an unscreened slap shot from the left circle at 11:52.

The Flyers were without their top-line center, Sean Couturier, after his mid-ice collision with Barzal in the second period of Game 5.

Atmosphere and history for Knicks in 2OT win over Celtics
Barker: Knicks don't need Kemba to be hero, just a help
Robinson pressed into action with Gibson out
Gallant feels time is right to put Panarin, Zibanejad on same line
Carrasco had surgery to remove fragment from right elbow
Jets' leading tackler Mosley 'day-to-day' with hamstring issue
Didn’t find what you were looking for?