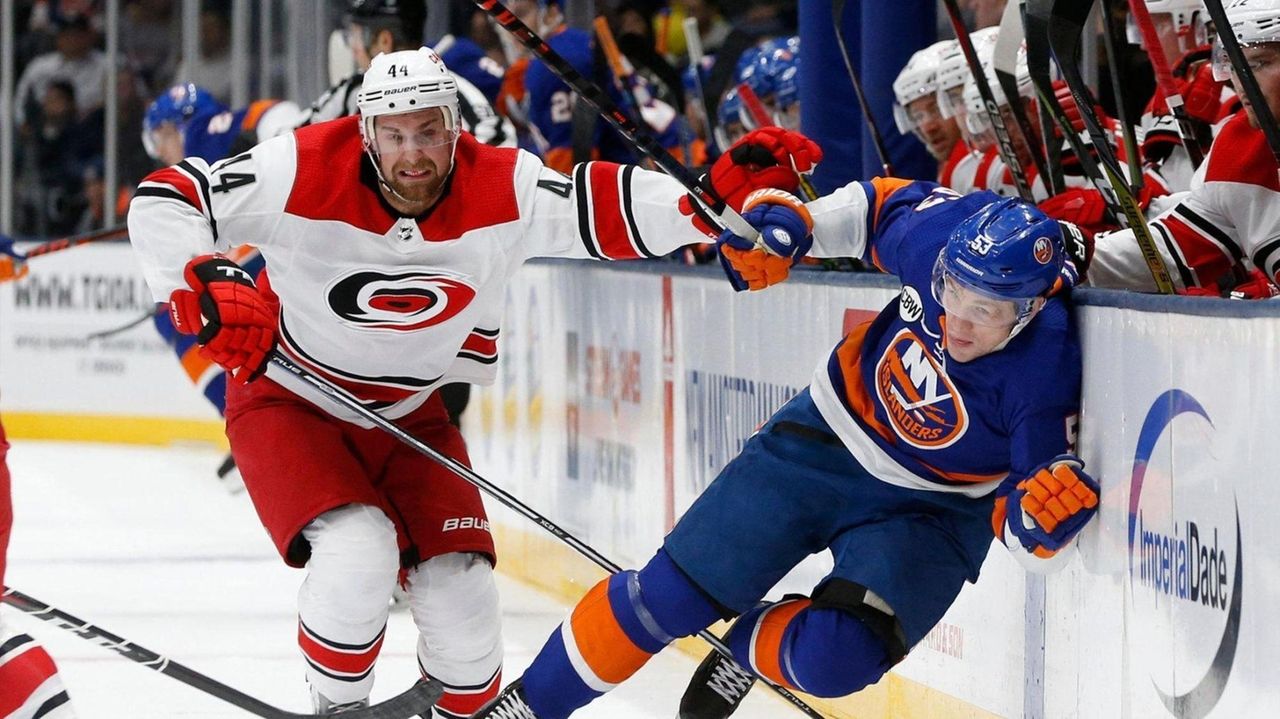 The Islanders were better but not good enough to steal a second straight game, this time done in by poor decisions with the puck and a power play that could not produce.

Their season-high six-game winning streak ended with a 4-3 loss to the Hurricanes on Tuesday night at NYCB Live’s Nassau Coliseum, denying them a chance for their longest single-season winning streak since they won nine straight from Dec. 31, 1989-Jan. 19, 1990.

“I thought we just mismanaged the game,” said coach Barry Trotz, particularly displeased with Mathew Barzal trying to skate through three defenders and instead coughing up the puck in the Islanders zone. That  led to Greg McKegg’s banked shot off defenseman Adam Pelech’s skate to give the Hurricanes a 2-1 lead with 6.0 seconds left in the first period.

“It wasn’t our best,” defenseman Johnny Boychuk added. “We were having a good first period but mismanaging the puck with 15 seconds left and they scored that goal and then we’re playing from behind. We still need to get a lot more investment through the whole team.”

The Islanders (23-14-4) went 0-for-3 on the power play and Justin Williams, coming out of the penalty box, put the Hurricanes ahead 3-2 at 17:18 of the third period. Jaccob Slavin’s power-play goal at 18:53 pushed it to 4-2 before Brock Nelson scored his second goal of the game with 58.2 seconds remaining.

“You can come out of that first period 1-1 but, instead, you come in 2-1 down and it’s deflating giving up a goal late,” Nelson said. “We did some good things but not enough to win and you can’t rely on an off-game and just getting some bounces. You’re not going to win many games like that.”

The Islanders were coming off Saturday night’s 4-3 win at St. Louis. But they needed three, third-period goals to get that victory and Trotz said the sub-par performance was both a “red flag” and a “wake-up call.”

Or it should have been.

“That’s a cardinal sin, a few seconds left in a period and to try and take on three guys and it ends up in the back of your net,” Trotz said. “There are certain events, certain moments in a game where you have to execute where it’s in the best interest of the group and the time and the score and the situation and we didn’t do that today. That’s a good way to lose hockey games.

“It’s going to be a tight race,” Trotz added. “That one or two points we could’ve had today, we threw them away.”

The loss dropped the Islanders one point behind the Canadiens for the Eastern Conference’s second wild-card spot.

Rookie defenseman Devon Toews, with his second NHL goal, tied the game at 2 at 4:50 of the third period on a blue-line shot off captain Anders Lee’s feed and through Nelson’s screen.

After falling behind in their previous two games, the Islanders took a 1-0 lead on the Hurricanes as Nelson, at the left point, intercepted defenseman Justin Faulk’s soft clearing attempt off the boards and skated in to beat McElhinney through his pads at 13:42 of the first period.

The Hurricanes tied the game at 1 as Saku Maenalanen, with his first NHL goal, got to the crease at 15:10 of the first period.

Jordan Eberle’s apparent equalizer at 2:26 of the second period was overturned because Valtteri Filppula was offside.

Herrmann: NHL win streaks hard to keep aliveThis tells you how hard it is to win seven games in a row during ... Isles activate Filppula, send down Ho-SangValtteri Filppula's return to the Islanders' lineup resulted in Josh Ho-Sang's latest departure to Bridgeport ...

Lennon: Taillon a small glimmer of hope for Yankees
2:12
AI startup sold to company backed by Mets owner
Let the NHL playoff jockeying begin for Isles, Caps
Possible options for the Jets at No. 23 overall
'Happy Gilmore' caddie is now a psychiatry professor at Stony Brook University
Highlights: Islanders vs. Rangers
Didn’t find what you were looking for?