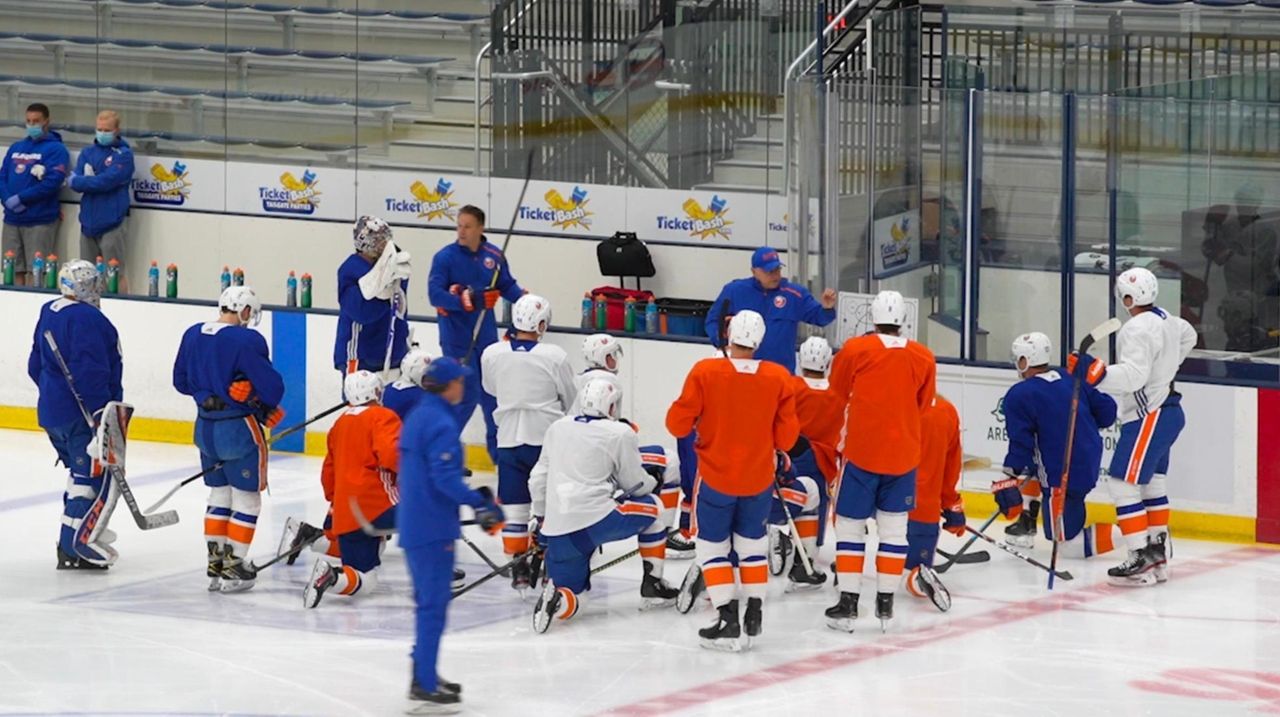 Newsday Islanders beat reporter Andrew Gross talks about the team's first day back on the ice on Monday, July 13, 2020, as training camps re-opened in full for the first time since March as the NHL prepares to return to play. Credit: Corey Sipkin

Nothing has been normal for members of the Islanders’ organization since the NHL season was paused on March 12 in response to COVID-19. The pandemic, the uncertainty over whether play would ever resume and trying to figure out how to train properly through all that left players and coaches in a hockey limbo.

But getting back to work on Monday with the opening of Training Camp 2.0 at Northwell Health Ice Center in East Meadow provided a respite.

“It’s just exciting to be back with the boys, back on the ice,” Anders Lee said (all interviews were conducted via Zoom teleconferences). “There’s definitely a different side of it mentally. It’s July The middle of summer. But you kind of fall back into old routines and old feelings and you kind of get back at it.”

Coach Barry Trotz conducted two sessions. And while five players from the 34-player roster, including defenseman Nick Leddy, did not skate, having defensemen Adam Pelech (Achilles tendon), Johnny Boychuk (left eye) and Casey Cizikas (left leg laceration) healthy and back made it seem even more normal.

“Getting to the rink and the protocols and the restrictions within the rink, they’re very stringent and they’re not normal,” Trotz said. “But the one thing that was normal was on the ice. It felt like you’re getting a little piece of yourself back. I think that’s what excites the group and probably excites every player and every coach in the league right now.”

The Islanders, seeded seventh in the Eastern Conference, will play the 10th-seeded Panthers in a best-of-five qualifying series starting Aug. 1 for a berth in the 16-team playoffs. The Islanders will report to their quarantined hotel/arena bubble in Toronto on July 26 and Trotz said he expects one exhibition game will be scheduled between July 28-30.

“The mindset has to be that we’re preparing for a playoff series, so let’s get that playoff mindset and go from there,” Trotz said, describing himself as “really happy” with the first day of practice and his team’s mindset.

“It was a good skate today,” Lee said. “Thankfully, it wasn’t one of Barry’s opening training camp days. I think we might have had a few more guys in the training room if that was the case. Today was a great first step.”

But there were other differences besides the tempering of the grueling conditioning skating that typically marks the opening of a Trotz training camp. The roster is about half the size of a normal training camp, and instead of three groups, there were only 15 players on the ice for each session, with goalie Christopher Gibson pulling double duty.

And instead of the three or four days before an extended preseason schedule, the Islanders might have about 12 practice days before leaving for Toronto.

Trotz said he will merge the players into one larger group soon.

“You want to skate with everybody,” said Cizikas, who missed 13 games after being cut with a skate blade on Feb. 11. “But it’s a different situation we’re in right now with everything going on.

“At the start of practice, I was nervous going out there and being with the guys. But once you get through the first drill, then it’s like everything’s back to normal. Guys were working, guys were skating and it was fun.”

Islanders return to ice for first time in 4 monthsNewsday's Andrew Gross talks about the Islanders' first day back on the ice as training camps re-opened in full for the first time since March as the NHL prepares to return to play.