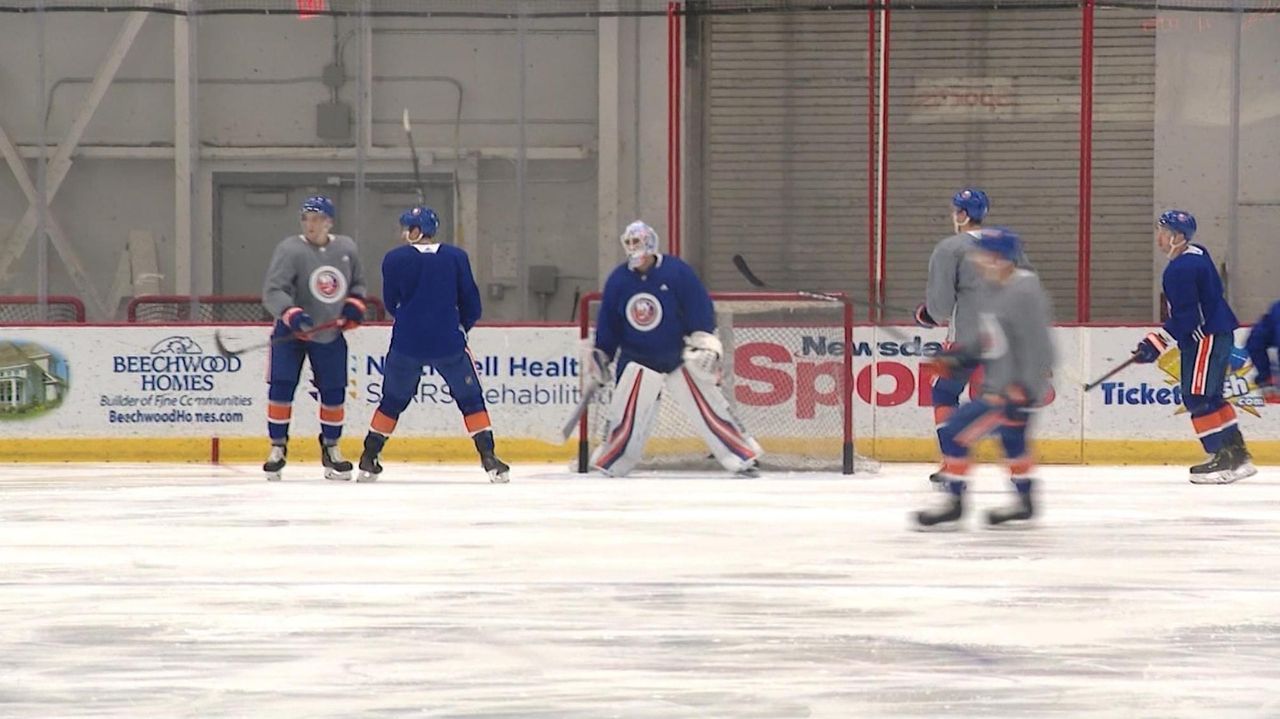 The Islanders on Monday talked about Tuesday's game against the Ottawa Senators – the first at Barclays this season. It will give them a chance to win 10 straight, which would be the second-longest win streak in franchise history. Credit: News 12 Long Island

Barry Trotz ticked off the names that won’t be on the ice at Barclays Center on Tuesday night. No Leo Komarov. No Jordan Eberle. And no timetable to return.

Maybe no Nick Leddy, either.

It’s not a fun list, obviously, but it does serve to highlight how remarkable this winning streak has been for the Islanders. Their game against the Ottawa Senators — the first at Barclays this season — will give them a chance to win 10 straight, which would be the second-longest winning streak in franchise history.

They’ve done it on the backs of their goalies and their defense, yes. But they’ve also managed it because this team has proved to be better than any one individual performance.

Host Andrew Gross talks about the Islanders' return to the Barclays Center and their winning streak, plus an interview with Cal Clutterbuck and Andrew's answers to your questions.

“We’ve had guys up and down the lineup show up,” Anders Lee said. “We’ve gotten contributions from everybody and it’s been a full team effort the whole time.”

Tuesday’s game, though, does provide a few distinct wrinkles. It’s their first of three straight games in Brooklyn, and they’re playing the Senators, with whom they butted heads late last month. That was the day the Islanders dressed 11 forwards, lost Matt Martin and Tom Kuhnhackl to injury and then saw the Senators seemingly target the remaining nine forwards, goading them into fights.

Lee said they’re all pretty used to the Brooklyn commute by now, and as for Ottawa, the Islanders won’t be thinking about that at all.

“There’s always some memories, depending on the situation,” he said. “We don’t have a problem with them being chippy. We have a problem on some of the thought processes — we were short some forwards and they started targeting some guys . . . But we’re fine. We can take care of ourselves. We’re not a small team. We can handle ourselves, so that’s not a problem for us. The number one factor for us is to win a hockey game, and that’s the number one message that you can send.”

Either way, these last two weeks dictate that the Senators will have their hands full.

“Power play, special teams have been solid for us,” Mathew Barzal said. “We’ve been putting the puck in the back of the net, which is nice, and at the same time, we’ve been giving up not much. It’s just kind of a group effort. It starts from the goalies out.”

They’ve also had some very notable individual efforts — such as Derick Brassard, who moved from center to right wing after Eberle’s injury and has scored in a career-high five straight games.

“Taking him out of the middle and moving him on that line has freed his mind to get back that offensive confidence,” Trotz said. “He’s got really good offensive instincts — a top-notch sort of offensive mind — and you watch him, especially on little plays, rushes, he sees where guys are going but he also opens up and makes himself available at times a little quicker than some other guys . . . I think just being on the wing probably freed his mind from worrying about the defensive game as much in that aspect. As a winger, you probably don’t have as much responsibility as a centerman.”

The Islanders could get Leddy (lower body) back, though Trotz said they’d have to evaluate him on Tuesday. Eberle practiced with the non-contact sweater. Komarov skated Monday morning but didn’t practice.

The Islanders have gotten contributions from up and down the roster during their nine-game winning streak. Twelve players have scored goals, 16 have registered assists and two goalies have been stingy. The top performers:

Island Ice 6: Back to Barclays, win streaks, Cal Clutterbuck, Andrew's Answers Host Andrew Gross talks about the Islanders' return to the Barclays Center and their winning streak, plus an interview with Cal Clutterbuck and Andrew's answers to your questions.