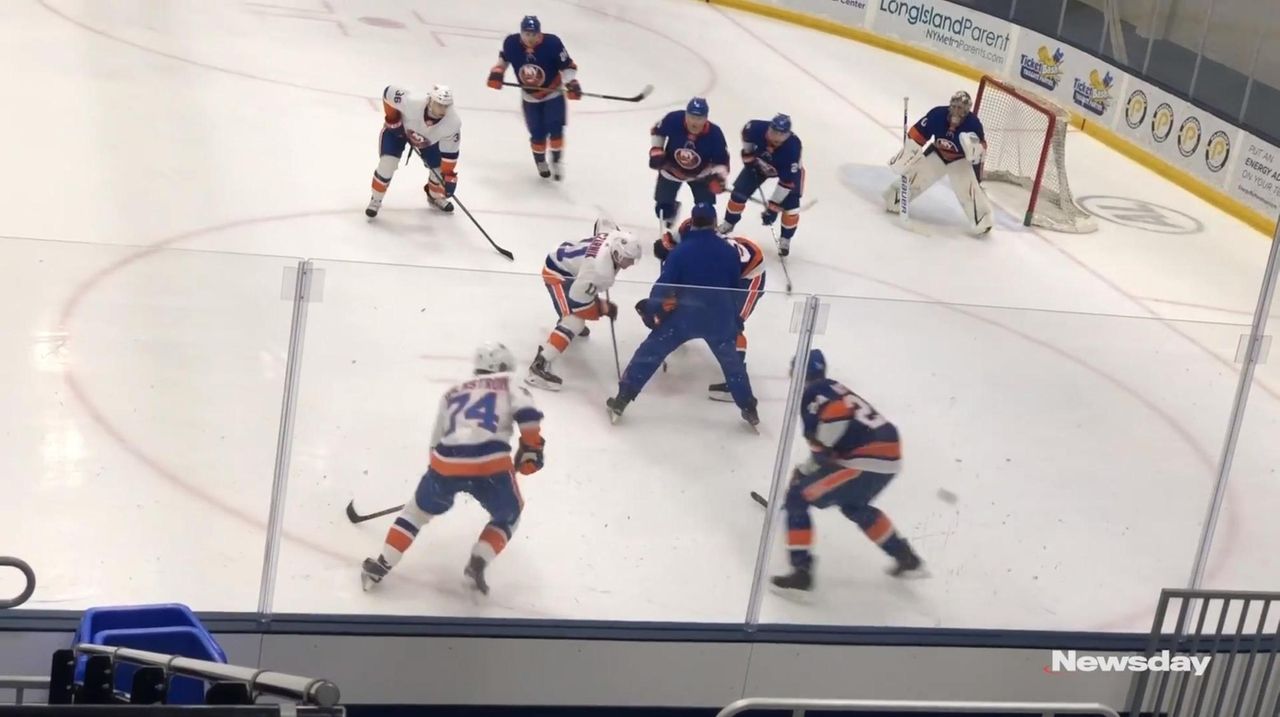 Newsday's Islanders reporter Andrew Gross gave an update from the team's training camp on Sunday, Jan. 10, 2020 at Northwell Health Ice Center in East Meadow. The Isles again scrimmaged with only a few days left before the season opener, and they seemed nearly settled in their rotations with Mathew Barzal back in the lineup with a new contract. Credit: Kathleen Malone-Van Dyke

Some things are different now for Jean-Gabriel Pageau, who is entering his first full season with the Islanders after his acquisition at the trade deadline helped fuel the team’s first run to the Eastern Conference finals since 1993.

But at least one thing still is the same: Pageau does not know who his linemates will be when the Islanders open their regular season against the Rangers on Thursday night at Madison Square Garden.

The third-line center skated with former first-round picks Oliver Wahlstrom and Kieffer Bellows during Sunday’s scrimmage at Northwell Health Ice Center in East Meadow. Each had a goal against highly touted Russian rookie Ilya Sorokin as their Blue squad beat the White squad, 4-1.

"They are definitely two really smart players and they have a really good skill set," Pageau said. "It’s hard to tell where I’m going to start. I mean, I’ve been on a different line every day.

"That’s what the camp was all about, too," added Pageau, noting the truncated 56-game regular season forced by the COVID-19 pandemic and a quick 10-day training camp without preseason games. "Everyone has to adjust and we don’t get as many reps, as many games to get that chemistry."

Except that Pageau is the only Islanders center without defined linemates. The other three lines are set, barring injuries.

It was like that during the postseason, too, as who would play on Pageau’s wing became a daily question. Derick Brassard, Pageau’s frequent left wing, departed via free agency for the Coyotes.

Still, Pageau proved his ability to adjust to different linemates with eight goals and three assists in 22 postseason games. After being acquired from the Senators on Feb. 24 for a first- and second-round pick and promptly signing a six-year, $30 million extension, he had two goals in seven games with the Islanders before the season was paused on March 12.

Coach Barry Trotz quickly came to rely on the trusty two-way center on both the power play and penalty kill. In training camp, Pageau has settled into the second power-play unit with defenseman Nick Leddy and the second line of Brock Nelson, Anthony Beauvillier and Josh Bailey.

Pageau said there definitely is more of a comfort level for him with the Islanders now.

"Yeah, not only more comfortable on the ice, just knowing all the systems right away, but to know everyone and kind of know their tendencies," he said. "Back in the bubble, I got the chance to know everyone more personally but, on the ice, it’s a big thing just to know what the tendencies are from the players. You’ve got to be adjustable to every situation."

The placement of Wahlstrom and Bellows with Pageau on Sunday certainly provides interesting fodder for discussion. The Islanders have only two practices remaining before the season opener, so a decision looms for Trotz.

Wahlstrom and Bellows could provide needed scoring, but whether each player’s two-way game will meet Trotz’s approval remains to be seen. Invaluable penalty-killer Leo Komarov, Andrew Ladd, Ross Johnston and Michael Dal Colle — as well as new Islanders A.J. Greer and Austin Czarnik, who had strong scrimmages — also are in the mix for playing time.

"With Bellows and Wahly, we want to see what we can do a little more on offense or something on the side," said Trotz, who called Pageau one of the smartest and most complete players in the NHL. "So it was sort of a last look at what we have. We know what we have in some of our older guys. We’ve just got to make sure that we understand and know where the young guys are."