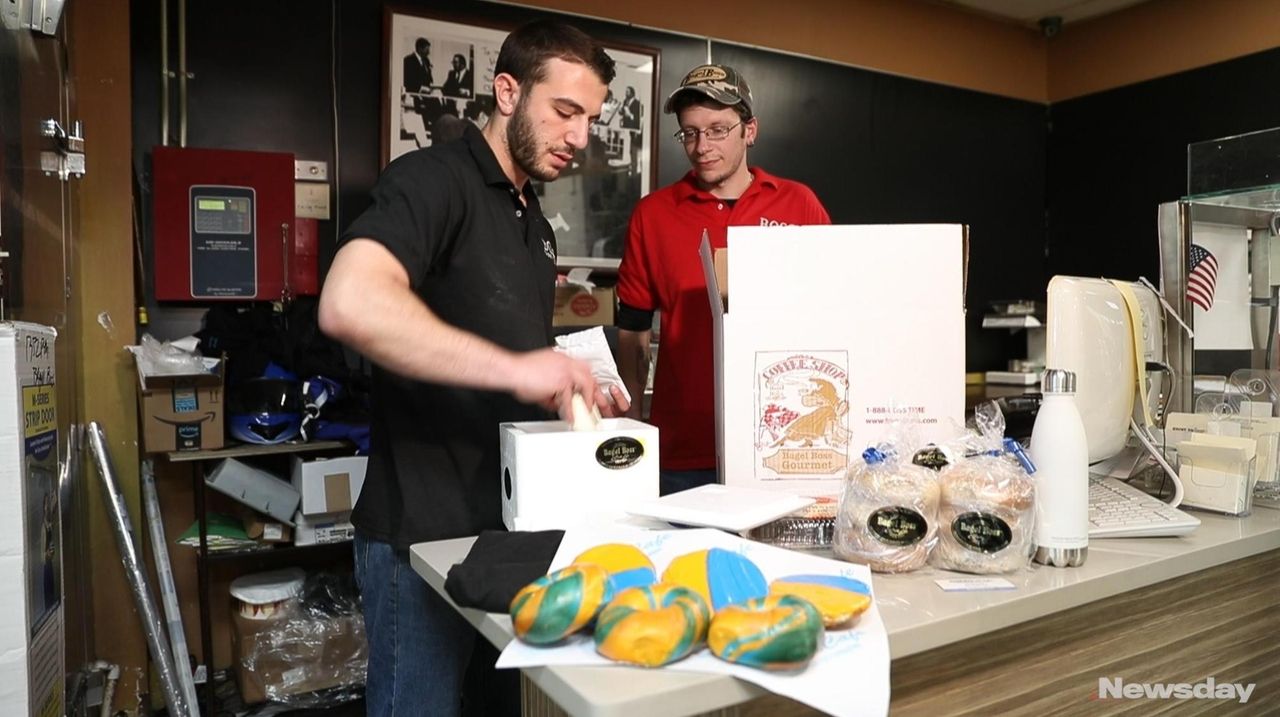 In a bid to persuade Islanders captain John Tavares to stay with the team, on Monday, Alex Rosner, a manager at Bagel Boss in Hewlett, mailed a shipment of blue and orange bagels and an assortment of schmears and pastries to Tavares’ agent’s office in Los Angeles. Credit: Michael Owens

As the Islanders scramble to keep John Tavares, Long Islanders are chipping in to up the ante.

The Islanders captain has been with the team since he was drafted in 2009 and will become an unrestricted free agent when the market opens July 1. A few teams are believed to be courting Tavares, so on Sunday morning, Donald Rosner, 37, of Carle Place — who owns a Bagel Boss store in Manhattan — decided to make Tavares his own best offer.

“If you stay with us I will personally deliver bagels to you and your wife fresh every morning for the rest of your or my life,” Rosner tweeted. “We love you John.”

It’s since been retweeted more than 700 times and the hashtag Rosner created, #Bagelsfor91, was trending on Twitter.

Tavares is reportedly meeting with at least five teams this week and is expected to sign a deal worth at least $11 million annually.

“The point of all of it is we want him to know how much his fans love him and want him to stay here,” Rosner said. “I’d do anything to sway his decision.”

Rosner said he didn’t expect his plea to gain so much attention but that he’s not exaggerating.

“If he called me right now and said I’m taking you up on your offer, I would personally deliver bagels to him and his family every single day,” Rosner said. “That’s how much I care.”

Other Long Islanders are also doing their part to persuade Tavares to stay.

Oyster Bay Brewing co-owner Gabe Haim promised to keep Tavares’ fridge stocked with their beer if he remains with the Islanders.

“I think bagels are great but beer is sometimes the fastest way to a man’s heart,” Haim said.

On Monday at the Bagel Boss in Hewlett, Rosner’s cousin, Alex Rosner, a manager at the store — which has locations on Long Island and Manhattan — was packing a shipment of blue and orange bagels and an assortment of schmears and pastries to send to Tavares’ agent’s office in Los Angeles.

“How else do you get someone to stay in New York? Offer them what we do best,” Alex Rosner said.

UFC 266 a tough but deserving test for Merab Dvalishvili
Bailey, Clutterbuck focused on one thing: Winning the Cup
Rieber: Yankees need to win now, by any means necessary
Rieber: After 707 days, Severino is all the way back
Loaisiga feeling 'very good' after throwing from 120 feet
Mets' fadeaway continues at Fenway
Didn’t find what you were looking for?