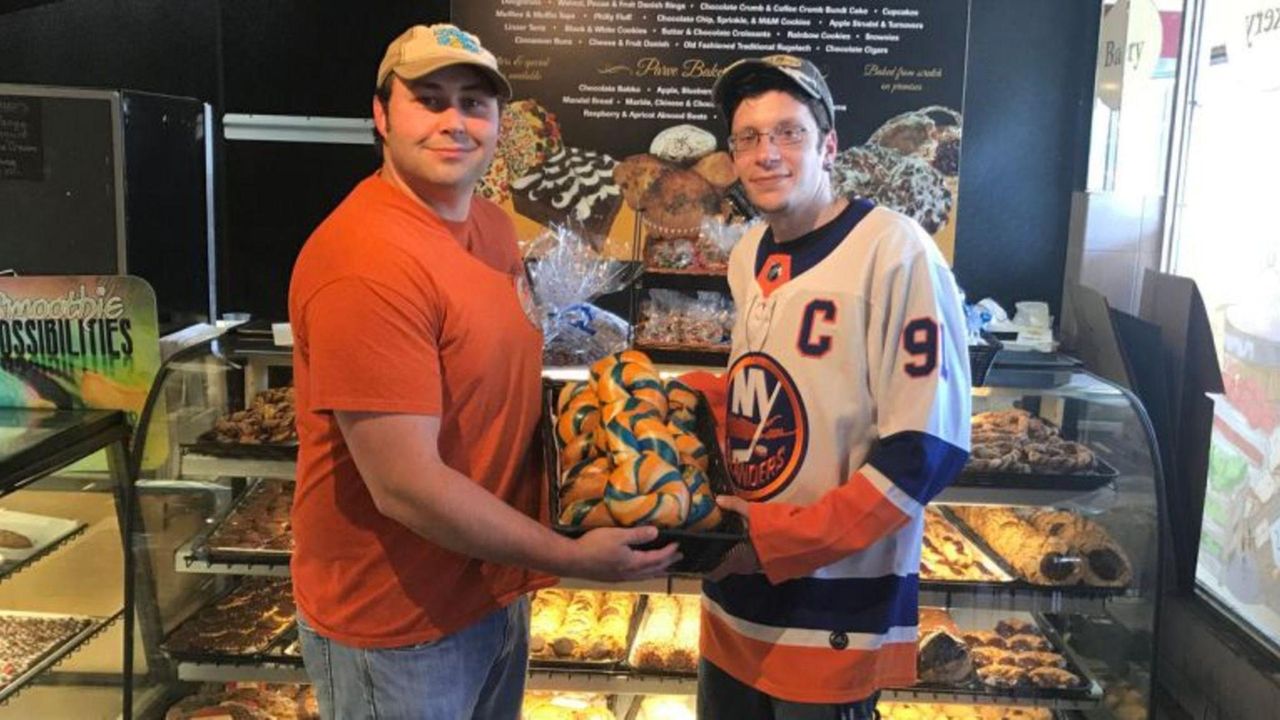 After launching the #BagelsFor91 social media campaign in hopes of John Tavares returning to the Islanders, Donald Rosner, owner of the Bagel Boss Murray Hill location, discusses the fan reaction to Tavares signing with Toronto, along with what's next for the blue and orange bagels, at Bagel Boss in Hicksville, on Monday July 2, 2018. Credit: Newsday / Owen O'Brien

Now that John Tavares has left the Islanders, you may be wondering what to do with your No. 91 Islanders jersey. Bagel Boss in Hicksville has an idea.

The cousins started the #BagelsFor91 Twitter campaign last week, offering Tavares a lifetime supply of bagels if he re-signed with the Islanders. The shop made up special blue, white and orange bagels for the occasion. But the No. 1 selection in the 2009 NHL Draft signed a seven-year, $77-million contract with his hometown Toronto Maple Leafs on Sunday. “We’re calling them Islanders bagels now,” Donald Rosner said.

Donald and David are big Islanders fans and said they wanted Tavares to stay on Long Island. Ultimately, they understood his decision.

“A lot of people understand why he left, myself included, but the way he went about it may not have been the right way to do it,” said Donald, wearing a Tavares jersey in his Bagel Boss office Monday. “The team could have made moves with a lot of big-name free agents had he said something sooner, but because he didn’t, fans just went absolutely bananas over it . . . It was heartbreaking.”

The cousins don’t want to see a scene similar to when LeBron James left Cleveland to sign with the Heat in July 2010. Feeling angry and betrayed, fans responded by burning James’ jersey.

“This was a difficult decision by him and we have to respect his decision and appreciate what he’s done for Long Island,” David said of Tavares. “And it’s straight up disrespectful to burn his apparel.”

John Tavares leaves Islanders for Maple LeafsThe Islanders' worst fear has been realized. John Tavares, the face of the Islanders franchise from the day he was selected first overall in 2009, will no longer be their player. Tavares agreed to a seven-year deal with his hometown Toronto Maple Leafs. Herrmann: Can you blame Tavares for leaving?Just as Tavares had the right to test the waters and make the plunge, fans have every right to boo and blame him. Just don't forget there is plenty of blame to go around. Isles fans most upset at the way Tavares left"I was hoping he would want to stay and be the franchise player that would get them to that next level, especially with the new management and new coach," James Pollin of Lynbrook said. John Tavares’ timeline with IslesA look at John Tavares' career with the Islanders -- and how he wound up with the Maple Leafs.