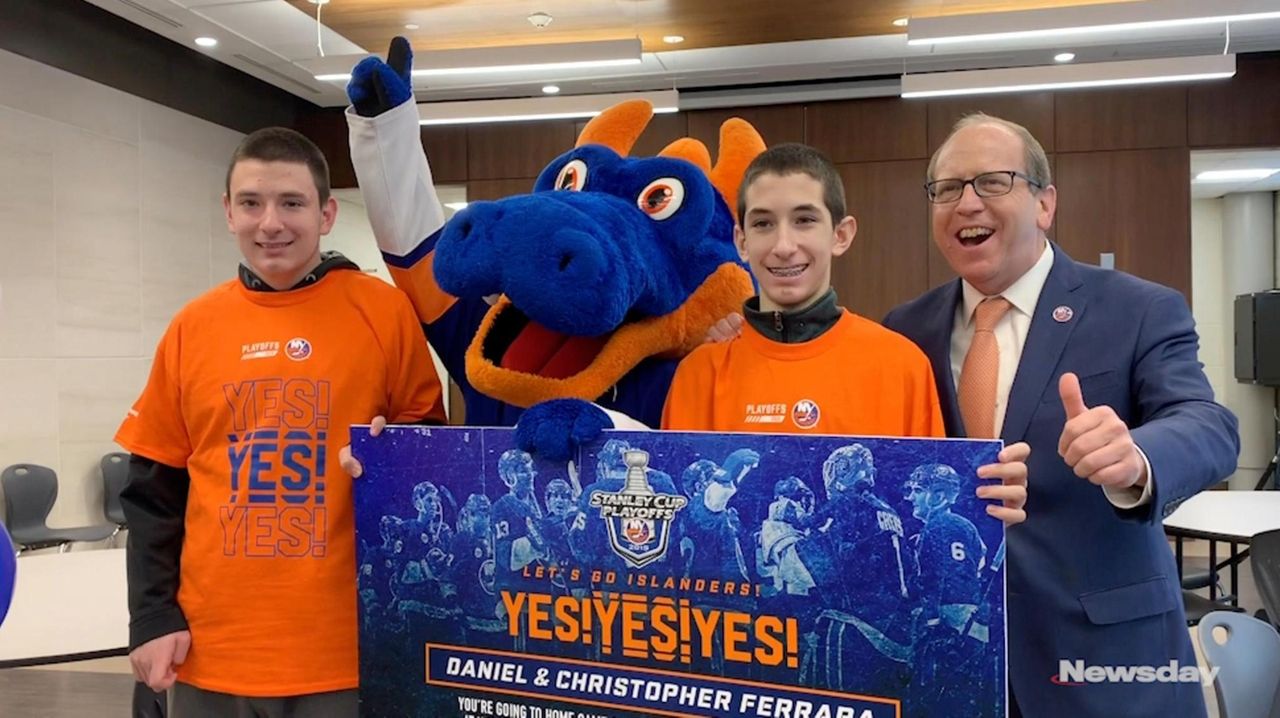 Ogden Toussaint never has been to an Islanders game, let alone been in a room with one of the men who owns the team, along with the Isles’ mascot.

The Elmont Memorial High School junior is not even that much of a sports fan. He’s thinking about pursuing a career in accounting. His high school teachers describe him as more of a debater than an athlete.

None of that mattered Monday afternoon when the three of them — Islanders co-owner Jon Ledecky, Sparky the Dragon and Toussaint — were together in the school principal’s office.

Because here’s the most important part: Toussaint was smiling. Laughing.

Two weeks ago, Toussaint lost his mother to lung cancer. She had been ill since August.

The Islanders, capitalizing on the buzz of their playoff berth, spent Monday crisscrossing Long Island on a goodwill tour, giving away playoff tickets to people in need of a pick-me-up.

To say Toussaint was surprised by receiving tickets to a hockey game is putting it mildly. The Islanders had reached out to Elmont Memorial High School with their idea, officials there chose Toussaint as a worthy recipient, and it all came together with approval from his dad, Yves.

Toussaint was called down to the principal’s office just before 1 p.m. without any knowledge of what was happening. Next thing he knew, Ledecky was telling him he will be going with his father and brother to the Islanders’ first playoff game against the Penguins on Wednesday night.

Then Ledecky asked, “Want to bring the mascot to your class? Can we make that happen?”

Toussaint was intrigued, and principal Kevin Dougherty was on board with it. So off they went: Toussaint, Ledecky and Sparky up to the third floor to crash Toussaint’s advanced physics class.

Initially, the students there were confused. Then Toussaint explained the bizarre events — “They surprised me,” he said — and soon they were taking selfies with Sparky and adding Toussaint to the middle of the scrum.

Yves later said by phone that he is thankful that his son was given a moment away from the grief. “We’re not in a good moment right now,” he said. Yves also said he hopes Wednesday night’s outing will be another distraction for his son. So does Ogden.

“Hopefully, I get some time not thinking about some things,” he said. “Who knows, maybe I’ll like hockey, too.”

The stop at Elmont Memorial High by the Islanders came amid a day in which Ledecky and a handful of staffers visited people at their homes in Bethpage, Bay Shore, Huntington Station and Ronkonkoma.

Starting their tour at three high schools around Belmont Park — Elmont, Floral Park and Sewanhaka — was no accident.

At each high school, the Islanders group gave out tickets to students who have overcome adversity. Then they were given a brief tour, which caused exactly the type of stir you might imagine when an oversized dragon walks through, say, a jam-packed lunchroom, which is what happened at Floral Park.

As the Islanders go through the approval process toward building a new arena at Belmont in time for the 2021-22 season, Ledecky wants to prove their words carry weight.

Jim Baumbach is an award-winning investigative reporter at Newsday, where he has worked since 1998. He also is the student newspaper adviser at St. John's University.