Islanders left wing Anthony Beauvillier celebrates his goal against the Capitals with teammates Devon Toews, Brock Nelson and Jean-Gabriel Pageau during the first period of an NHL Stanley Cup playoff game in Toronto on Thursday. Credit: The Canadian Press via AP/Nathan Denette

Two games apparently was about as long as the Capitals could hold down the Islanders’ three hottest players.

Because after the line of Anthony Beauvillier, Josh Bailey and Brock Nelson went two games without a point between them, the trio broke out in Game 5 of the Islanders’ first-round playoff series against the Washington Capitals on Thursday night.

Beauvillier scored two goals, Bailey had a goal and two assists and the line combined for six points in a 4-0 victory that sent the Capitals home and sent the Islanders on to the second round. 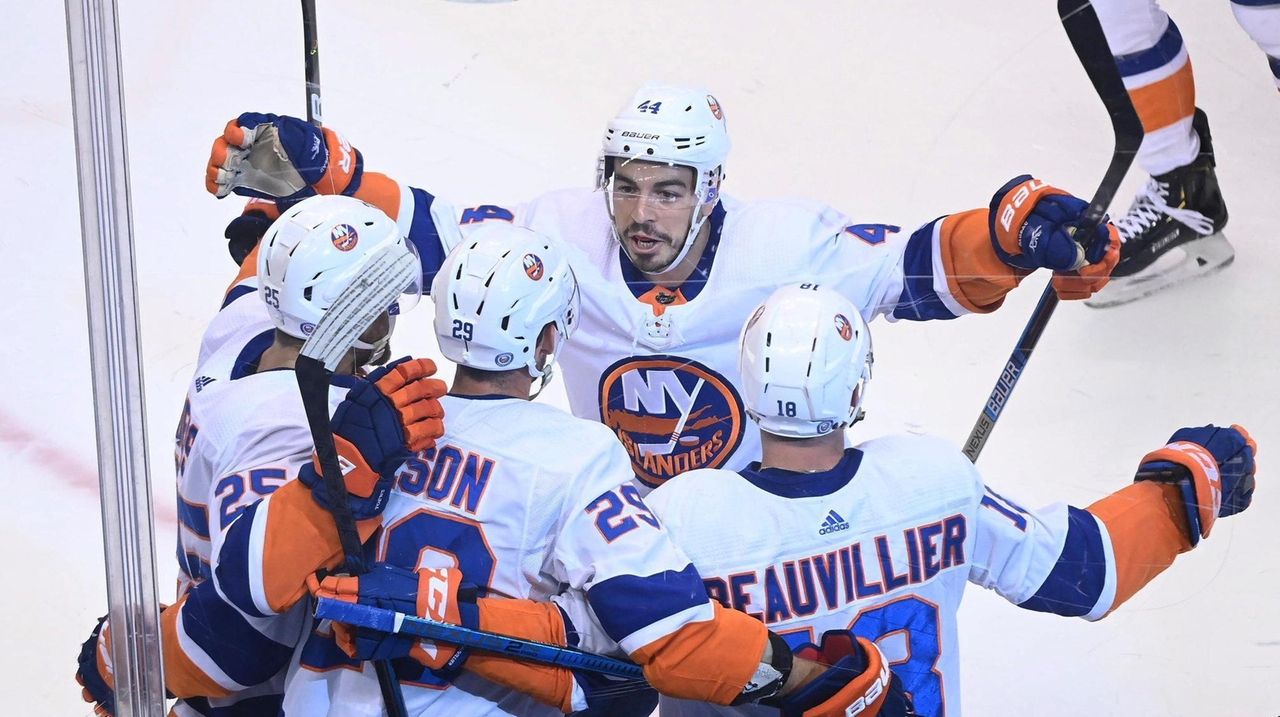 The goals were Beauvillier’s fifth and sixth of the postseason, tying him with Vancouver’s Bo Horvat and Colorado’s Nazem Kadri for the league lead.

“It’s not really something you focus on,’’ Beauvillier said when asked about being among the league leaders. “You’re just gonna try to go out there and play your best and try to . . . help your team to win. That’s kind of my main focus these last couple of weeks and it’s been working.’’

Bailey leads the Islanders with 10 points (two goals, eight assists) and Beauvillier is second with nine (six goals, three assists). Nelson (three goals, four assists) is tied for third with Mathew Barzal. The point totals are career playoff highs for all three players, who combined on Beauvillier’s power-play goal at 10:19 of the first to open the scoring.

It was only the Islanders’ second power-play goal in 20 opportunities in the series. They were 1-for-3 with the extra man in the game, leaving them at 2-for-22 for the series.

But other than that, everything went the Islanders’ way in Game 5. They held Washington to 21 shots on goal (they took only 17 themselves), and once they got the lead, they were able to shut the door on coach Barry Trotz’ former team.

“When we’re playing the right way, you can feel it on the bench. It’s contagious,’’ said Bailey, whose empty-net goal with 1:29 remaining closed the scoresheet. “[Beauvillier]’s really stepped up his game. And [he’s] a big leader for us. He’s scored some big goals. I think that second goal, just paying the price, getting to the net, he’s doing a lot of things well.’’

Beauvillier’s second goal had the Islanders holding their breath for a moment, as he took a shot from Capitals forward Tom Wilson after he scored.

Bailey had dangled the puck past Washington defenseman John Carlson and then slipped a pass behind Carlson to Beauvillier wide left. Beauvillier cut to the net and roofed a backhand shot over goaltender Braden Holtby to make it 2-0 at 9:33 of the second period. But as he leaped to avoid colliding with Holtby, he was hit by Wilson and sent flying into the goalpost. He got up gingerly but was able to take his next shift with no problems.

Palmieri returns to Islanders' lineup vs. Kings
Rangers can't look past Blue Jackets with Lundqvist Night looming
Even with all the hurdles so far, Nets still in good position
Pulock skates with Isles, timeline for return still uncertain
Rangers' Gauthier gets chance to impress on top line
It's time for the Mets' booth to get the bobblehead treatment
Didn’t find what you were looking for?