Kael Mouillierat of the New York Islanders celebrates his third-period goal, his first in the NHL, against the Arizona Coyotes with teammate Nikolay Kulemin and Colin McDonald at Nassau Coliseum on Tuesday, Feb. 24, 2015. Credit: Jim McIsaac

The Islanders were stumbling their way through 40 minutes against an Arizona Coyotes team, near the bottom of the Pacific Division, headed in the opposite direction from the Islanders who are at the top of the Metropolitan.

A 1-1 game entering the third at the Coliseum Tuesday night against the 28th-ranked team in the league didn't seem befitting an Islanders team attempting to win 40 games for the first time since 2006-07.

With Jack Capuano "throwing numbers in a hat" to form forward lines, according to Brock Nelson, the game was crying out for a simple, straightforward approach. Which is why a few of the unflashy players, including recent call-up Kael Mouillierat, battled to break through.

Matt Martin's goal at 3:18 of the third snapped the tie and snapped the Islanders to life. With 9:10 gone, the lead and the final score was 5-1, with Mouillierat scoring his first NHL goal after assisting on Martin's tally, with Johnny Boychuk and Nelson adding goals, with Colin McDonald and Nikolay Kulemin chipping in assists and Chad Johnson posting his third straight strong outing with 27 saves.

"You just go out and play your position," said Nelson, who scored his 17th and assisted on Anders Lee's 20th, the goal that opened the scoring at 37 seconds of the second period. "We had a couple of those different lines that produced and that's good to see."

After a bit of a lost weekend, with a shootout loss in Washington followed by a shutout loss to the Canucks at home on Sunday, Capuano was clearly not pleased with what his team was producing Tuesday night.

Lee scored from in tight to become the third NHL rookie to score 20 goals this season. The Coyotes evened the score on Mark Arcobello's tally at 15:52 of the second.

Starting the third with seemingly new lines every shift, it fell to the fourth-liners to initiate the flood tide. Mouillierat and Kulemin hounded the puck into the Coyotes' zone and it caromed out to Martin, who snapped a shot over Mike Smith for his eighth of the season.

Off a four-on-two rush, John Tavares fed Boychuk for a quick wrister at 4:15. And Mouillierat was set up at the right circle to snap a feed from McDonald past Smith at 7:16, a truly amazing feeling for the 27-year-old journeyman in his third NHL game. 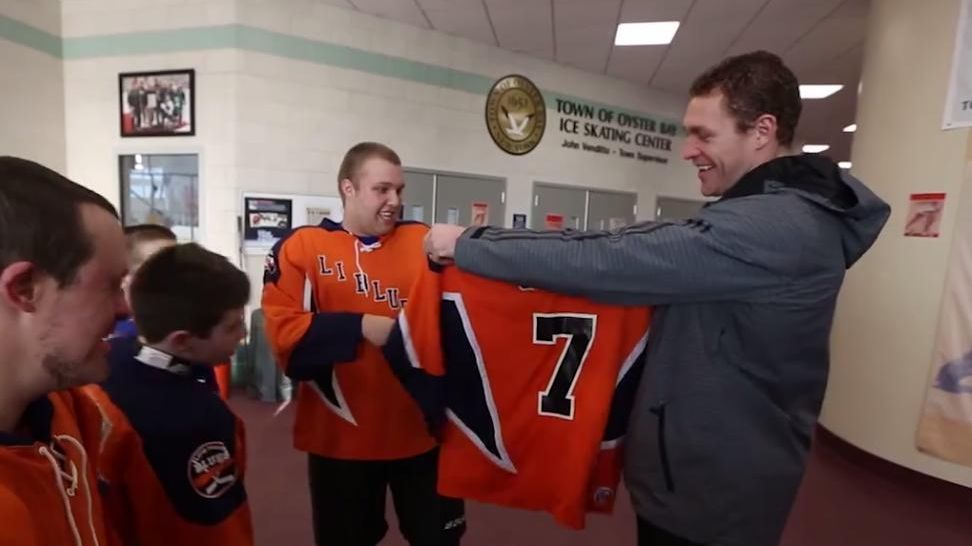 Isles episode 10: Matt Carkner and the LI Blues Matt Carkner, an Islanders defenseman coming off back surgery, dedicates some of his off-ice time to working with the Long Island Blues, a special needs youth hockey team. He gives the kids tours of the Islanders' locker room at Nassau Coliseum, organizes meet-and-greets with other Islanders and helps teach the fundamentals of the sport. (Credit: Newsday Staff)

"There's times you think it's never going to happen," Mouillierat said. "It's pretty unbelievable, especially at my age, in my first crack in the NHL."

Nelson closed the flurry by batting a rebound out of midair past Smith. Johnson, getting the surprising call with no games until Friday, was clean and tidy in his net all night, another unsung Islander stepping to the fore to keep the team two points ahead of the Rangers.

The Islanders closed a stretch of seven games in 11 days, getting a well-earned day off today before the next grueling stretch begins. They will finish a busy month of 10 home games with back-to-back games at Nassau Coliseum on Friday against Calgary and Saturday against Carolina.

It feels far different to sit at 82 points with 20 games to go than going through these stretches fighting to gain ground in a playoff race.

"They gave us a tough fight for two periods," Mouillierat said. "These are huge points for us, we've played a lot of hockey the last few days. So we gave everything we had in the third, we left it all out there and it showed."

St. John's surges to victory over Fordham
Jets' defense allows points on first seven drives in loss to Eagles
Chicago interim coach King happy to see UBS Arena
Hodges finally voted into Hall of Fame
Islanders lose to Chicago in a shootout as skid extends to 11
Glauber: There's no defense for Jets' defense
Didn’t find what you were looking for?