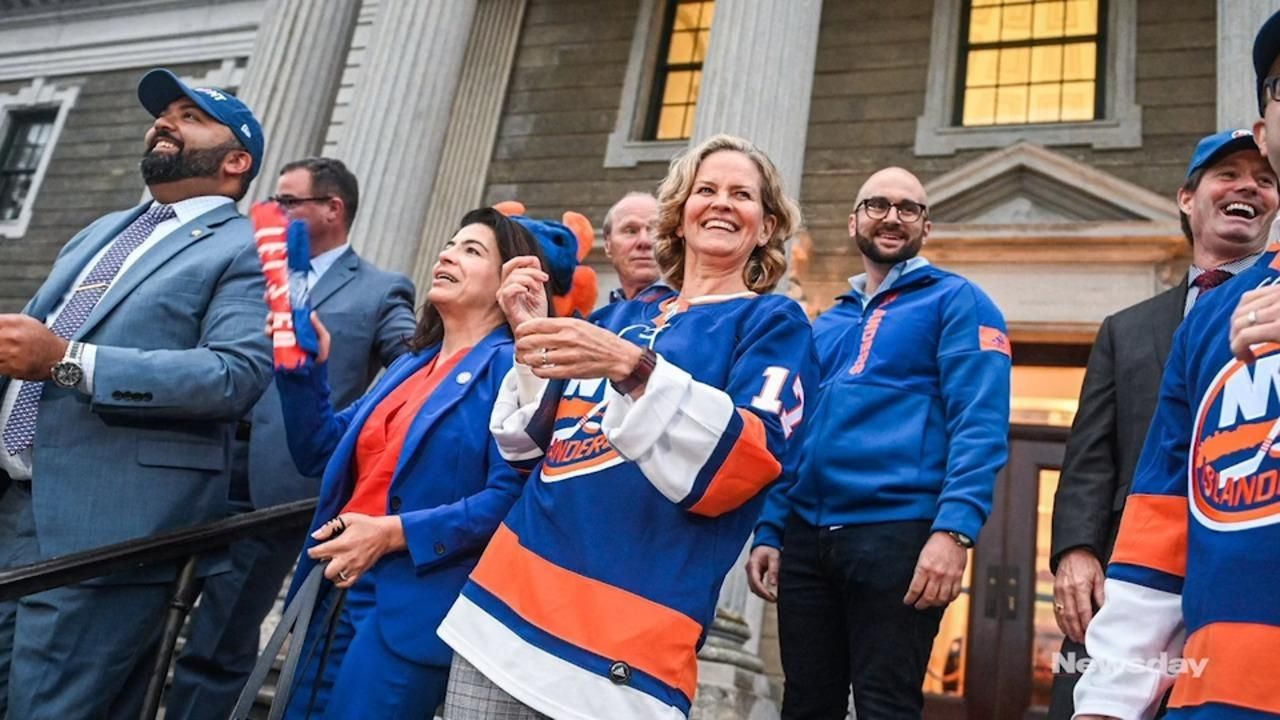 Nassau County Executive Laura Curran has asked the NHL to consider moving all Islanders games to NYCB Live’s Nassau Coliseum next season before they open their Belmont Park arena in 2021.

In a letter to NHL commissioner Gary Bettman on Thursday, which Curran also posted on Twitter, the county executive wrote, “It’s what the fans want. It’s what the players want . . . Let us ‘Rock The Barn’ for one more full and final year.”

In response, NHL commissioner Gary Bettman said in a statement to Newsday, “We appreciate the County Executive’s passion and interest. The request is a little premature, but it’s something we’ll consider at the appropriate time.”

An Islanders spokesman said the team is keeping in touch with Bettman on the matter.

I’m asking @NHL Commissioner Bettman to allow the @NYIslanders to play all home games for the 2020-2021 regular season at @NYCBLive Nassau Coliseum.

Let’s #RockTheBarn for one more full and final year!

As construction on the Islanders’ new arena continues at Belmont, the team currently is in the second year of an unusual three-year deal in which they are splitting their home games between two local arenas — the Coliseum and Brooklyn’s Barclays Center.

Initially the NHL was reluctant to allow more than half of their games at the Coliseum, the Islanders’ home from 1972 until 2015, because league officials said the 13,900-seat arena lacked modern amenities such as suites and large concourses and therefore is not considered an “NHL major league facility.”

But the league’s stance on allowing more games there softened somewhat as the Islanders’ Belmont arena plans successfully moved through the state’s approval process.

The NHL permitted the Islanders’ home games in the first round of the playoffs last year to be played at the Coliseum, and in September, Bettman personally announced that seven regular-season games previously scheduled for Barclays Center this season would be moved to the Coliseum. That makes it 28 Coliseum games this season compared with 13 in Brooklyn.

As far as the playoffs are concerned this season, no decision on the Islanders’ home site has been made yet, NHL deputy commissioner Bill Daly said Thursday. The decision last year regarding the Islanders’ home playoff sites — first round at the Coliseum and the rest in Brooklyn — was announced on Feb. 15.

Either way, the company that operates the Coliseum — now Onexim Sports and Entertainment after the sale of Barclays Center in the fall — also said Thursday it is open to hosting more Islanders games.

Onexim executive Nick Vaerewyck, who is in charge of programming at the Coliseum, said Thursday that his staff “has been working hard with the team and NHL to provide the fans what they desire, their team on Long Island.”

Marshall: Curran's goal: Isles to ColiseumCurran wrote a letter Thursday urging the NHL to allow the Isles to play the entire 2020-2021 hockey season at Nassau Coliseum. Baumbach on Curran's ask to play all Isles games at Coliseum next seasonOn Jan. 16, 2020, Nassau County Executive Laura Curran wrote a letter to NHL Commissioner Gary Bettman asking that the league allow the Islanders to play all their home games at NYCB Live's Nassau Coliseum for the 2020-21 season. Newsday reporter Jim Baumbach discusses Curran's ask and the NHL's response.

Nets getting failing grade in final quarter
Saleh hopeful Williams will be healthy by training camp
One more chance for young Rangers to show they belong
1:50
How Yankee Stadium reacted to Altuve's game-changing homer
Bobby V running for mayor of Stamford
No plans for fans to attend Jeter's Hall of Fame ceremony
Didn’t find what you were looking for?