Oliver Wahlstrom puts on an Islanders jersey after being selected by the team during the NHL Draft in Dallas on Friday. Credit: AP / Michael Ainsworth

DALLAS — Trades were predicted. The Islanders held picks Nos. 11 and 12 in the NHL Draft on Friday night at American Airlines Center, and with a need for a No. 1 goalie and an NHL-ready defenseman (if not two of them), the odds of Lou Lamoriello using both selections did not seem likely.

Then again, not many mock drafts had right wing Oliver Wahlstrom and defenseman Noah Dobson being available when the Islanders’ new president and general manager was on the clock.

So the Islanders gladly took the two highly rated prospects.

“I don’t think we can be more delighted,” Lamoriello said. “You have to feel extremely good. Both are exceptional players. I don’t think you don’t ever not make a trade if it’s going to make your team better. Obviously, that didn’t happen. But when you see a player like these players there, you feel very good because they’re outstanding prospects.” 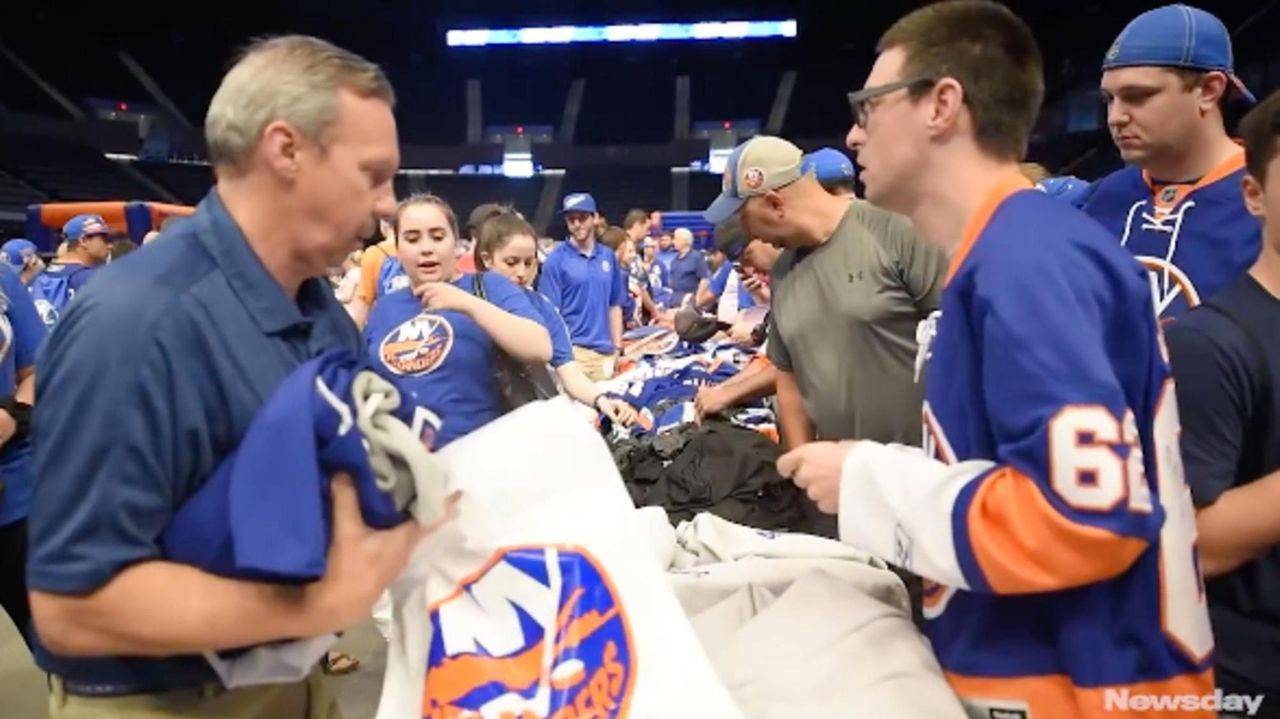 Rounds two through seven will be held Saturday. The Islanders have two picks in the second round and one in rounds three, four, five and seven.

The only trade involving a goalie on Friday had the Capitals sending Philipp Grubauer and defenseman Brooks Orpik to the Avalanche for the 47th overall pick in the draft.

“I don’t think we need to come away these two days with anything,” Lamoriello said. “But we are looking for a goalie, absolutely. I think we have quite a bit of time to get that done.”

At No. 11, the Islanders selected Wahlstrom, a 6-1, 208-pounder who had 22 goals and 23 assists in 26 USHL games last season for the U.S. Under-18 squad. He was ranked seventh overall among North American skaters in the final NHL Central Scouting Bureau rankings and is committed to Boston College.

Wahlstrom is considered perhaps the best scoring talent in the draft. He has a nose for the net and is a smooth skater with excellent hands.

“In 1989, Lou Lamoriello was the GM of the New Jersey Devils and with the fifth overall pick, the Devils selected Bill Guerin,” analyst Pierre McGuire said on the NBC Sports Network telecast. “Oliver Wahlstrom has the potential to be this generation’s version of Bill Guerin.”

At No. 12, the Islanders took the 6-3, 180-pound Dobson of Acadie-Bathurst of the Quebec Major Junior Hockey League. The offensive-minded Dobson had 17 goals and 52 assists in 67 games and was the fifth-ranked North American skater by CSB.

“This is found money,” analyst Bob McKenzie said on the NBCSN telecast.

The Islanders have won only one playoff series since 1993 and missed the playoffs the past two seasons. But with the addition of Lamoriello and Trotz and with expectations rising that the Islanders will be able to re-sign franchise player John Tavares, the perception of the organization has changed.

“It’s a dream come true,” Wahlstrom said. “To be in New York and with a powerhouse organization. It’s a good staff. You can tell they’re bringing in very exciting players. I’m excited to be a part of this.”

Dobson said he was not concerned that he fell out of the top 10, which is where he was projected in many mock drafts.

“Just to be in the NHL and the chance to be selected is a dream,” Dobson said. “I’m happy to join any organization.”

Both players are expected at this week’s prospect development camp, and both said they expect to compete for a roster spot out of training camp.