A much-needed win again has switched the narrative for the Islanders, who are back to vying for playoff positioning and can clinch a third straight postseason berth with a regulation win over the Rangers on Saturday night at Nassau Coliseum.

Whether the Islanders could hold off the Rangers for an East Division playoff spot was much more of a concern before their impressive 4-0 win over the Blueshirts at Madison Square Garden on Thursday.

"The win was just special for this room and everybody involved," rookie Oliver Wahlstrom said Thursday. "I think we just carry on from this and get our game back to where it should be." 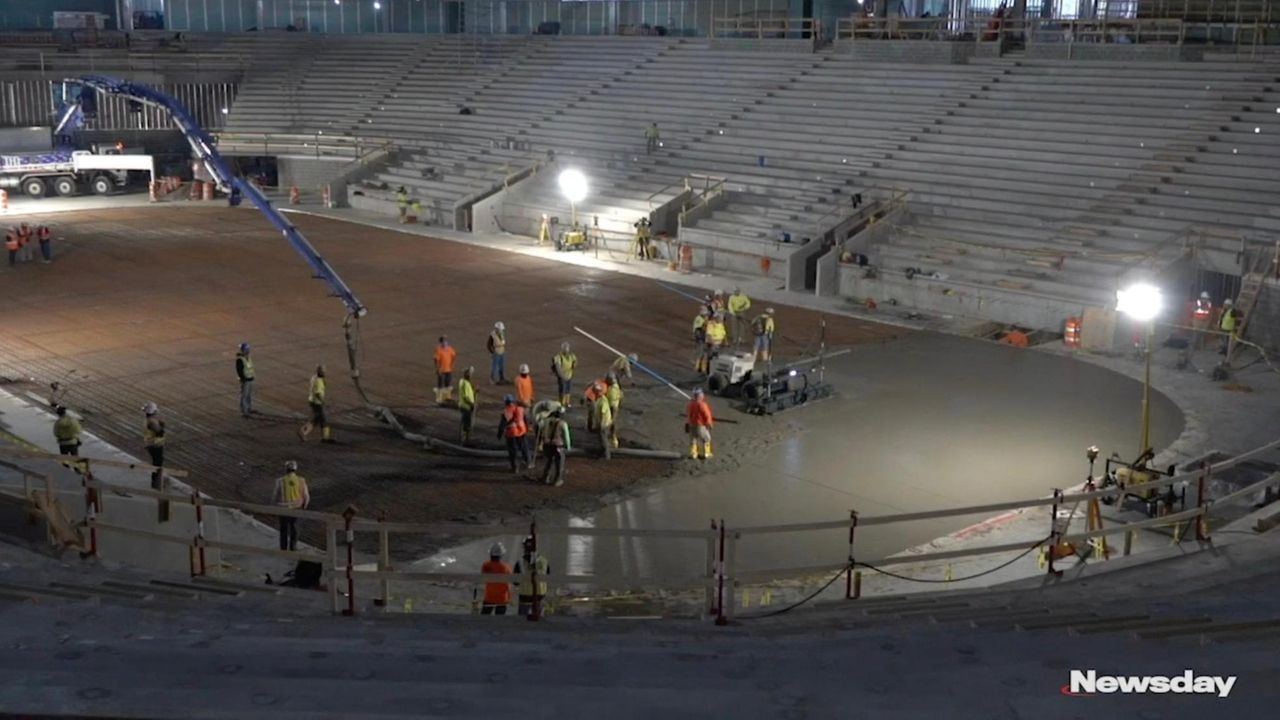 Concrete poured for arena floor at Isles' UBS Arena Thursday marked a big day at UBS Arena at Belmont Park, the future home of the Islanders, as concrete was poured on the arena floor to gear up for its targeted opening in November.  Credit: Andrew Gross; New York Islanders

But, most importantly, the Islanders opened a seven-point gap on the fifth-place Rangers, who also have played one extra game. It likely will be the Rangers’ final appearance at the Coliseum, barring construction delays at UBS Arena, which is targeted to open in November.

After Saturday’s game, the Islanders will conclude the regular season with two-game sets against the Devils and Sabres, the East’s distant bottom-dwellers, before their finale in Boston on May 10.

The final six regular-season games will be a good test for Wahlstrom to show coach Barry Trotz that he’s learned from his recent stint out of the lineup.

Wahlstrom scored a first-period power-play goal on Thursday, his 10th of the season but his first in 11 games dating to March 25. It was Wahlstrom’s second game back in the lineup after being a healthy scratch for three games.

"It’s really good learning for me to play a streak of games and then get sat," Wahlstrom said. "I wasn’t sharp those last few games before I got sat. I learned a lot just to get back to the basics, get back to playing a little harder, winning my wall battles and the rest will come. Just stick to that and get back to that."

Trotz, describing Wahlstrom’s game during that stretch as "nondescript," said his practice habits had slipped and that had carried into games. Trotz believed Wahlstrom became complacent with his role.

It’s also the first full NHL season that Wahlstrom has gone through, even if it’s a shortened 56-game schedule. All young players must adjust to that grind.

"It’s a different year," Wahlstrom said. "In this league, you’ve got to be sharp every night, and I think I’m learning that right now. No matter how you feel, you’ve always got to bring something to the table.

"Sitting out, I learned just take a step back, take a deep breath and just move forward and keep working on the little things. Because this league eats you up if you don’t do those details and the wall battles and things like that."

Nets get failing grade in final quarter
Langford embraces pressure of maintaining Stony Brook's success
Zach Wilson makes great first impression with Jets teammates
Knicks burned by Bridges after they bypassed him in 2018 NBA Draft
Saleh hopeful Williams will be healthy by training camp
One more chance for young Rangers to show they belong
Didn’t find what you were looking for?