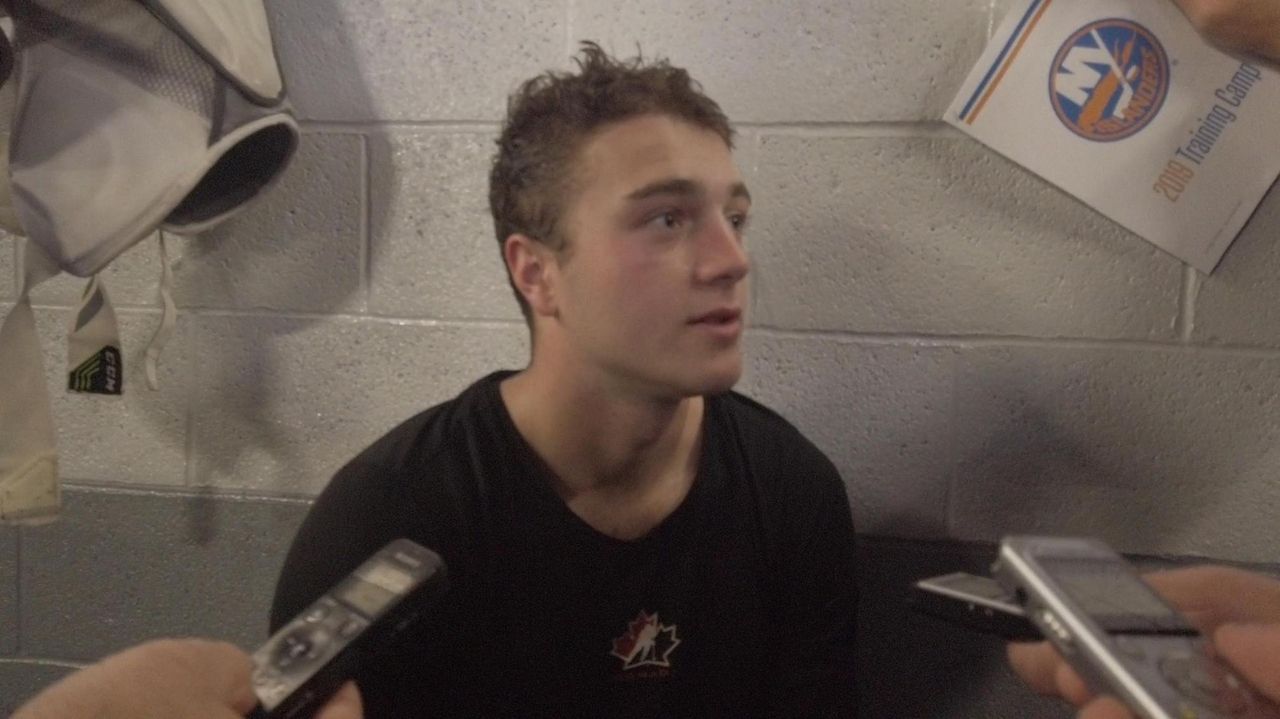 Islanders defenseman Noah Dobson, the No. 12 overall selection in 2018, discusses the start of training camp and trying to make the roster. At 19, he is too young to play for the Isles' AHL affiliate in Bridgeport. Credit: Andrew Theodorakis

Lou Lamoriello knows exactly where Noah Dobson’s development would best be served this season. Problem is, at 19, the Islanders’ prized defense prospect is not eligible to play in the AHL with Bridgeport.

The Islanders president and general manager said he believes that eligibility rule will be changed in the next collective bargaining agreement. But Dobson took the ice in East Meadow on Friday for the first day of on-ice training camp practices knowing he was either going to earn a spot on the Islanders’ opening-night roster or be returned to his Quebec Major Junior Hockey League squad.

Dobson, the 12th overall pick in 2018, can play nine NHL games before being re-assigned to his junior team.

“We’ll allow training camp to take of itself and, usually, a lot of questions are answered,” Lamoriello said. “When you get into situations with a young player like him, who’s had success in juniors like he’s had, certainly the next step would best be the AHL, which I think will come in the future with the rules change.”

The 6-4, 194-pound, right-shooting Dobson has won back-to-back Memorial Cup championships, with Rouyn-Noranda last season and Acadie-Bathurst in 2018. He led all QMJHL defensemen with 29 points – eight goals and 21 assists – in 20 Memorial Cup tournament games for Rouyn-Noranda.

“I think I saw a big change in my level,” Dobson said. “I was able to dominate more at the junior level last year than my 17 year. I feel like I can have an opportunity to move on and play at this level. I feel like I had a good summer, put the work in. If I get in one of the preseason games, build off of that and play my game and see what happens.”

The Islanders open their seven-game preseason schedule on Monday night at Philadelphia, and Dobson is likely to get an intensive audition.

The Islanders have seven defensemen back from last season’s team — eight with Luca Sbisa in training camp on a professional tryout offer — making for a tight competition for playing time.

Last season, Devon Toews stood out as the best defenseman in training camp and Lamoriello still opted to re-assign Toews, now 25, to Bridgeport. Toews made his NHL debut on Dec. 23 and is now a fixture among the Islanders’ top six.

Coach Barry Trotz said Dobson, because he is not AHL eligible, will be evaluated differently during the preseason.

“I think you’ve got to look at him a little different,” Trotz said. “Any decision on Noah will be with a total organization eye on that. He’s a really good player, no question. He’s a high-end guy. That’s where the rule sometimes doesn’t help those types of players. They’re sort of tweeners.

“Another year in junior is probably not going to help him a whole lot,” Trotz added. “You lose pace. You rely on your natural ability and you don’t keep progressing. That will be taken into consideration.”

Dobson said he worked on getting stronger during the summer while putting on weight and is more comfortable in training camp than he was last year.

He said there are things he can still accomplish in junior hockey, most notably attempting to win three straight Memorial Cups.

But there’s no doubt where Dobson would like to be.

“I feel like I can play at this level,” Dobson said. “At the end of the day, it’s not going to be my decision. All I can do is try to make it a tough decision.”

It certainly will be for the Islanders, given the limited options.

Jacob deGrom says he's ready to go Monday
Lindor provides only offense for Mets in doubleheader split with Nats
Barker: Anything less than NBA Finals will be failed season for Nets
Best: Why Isles, Nets hosting playoff games on same night is significant
Lennon: Can the Yankees bottle the way they played Saturday?
Voit expected to return to Yankees' lineup Tuesday
Didn’t find what you were looking for?