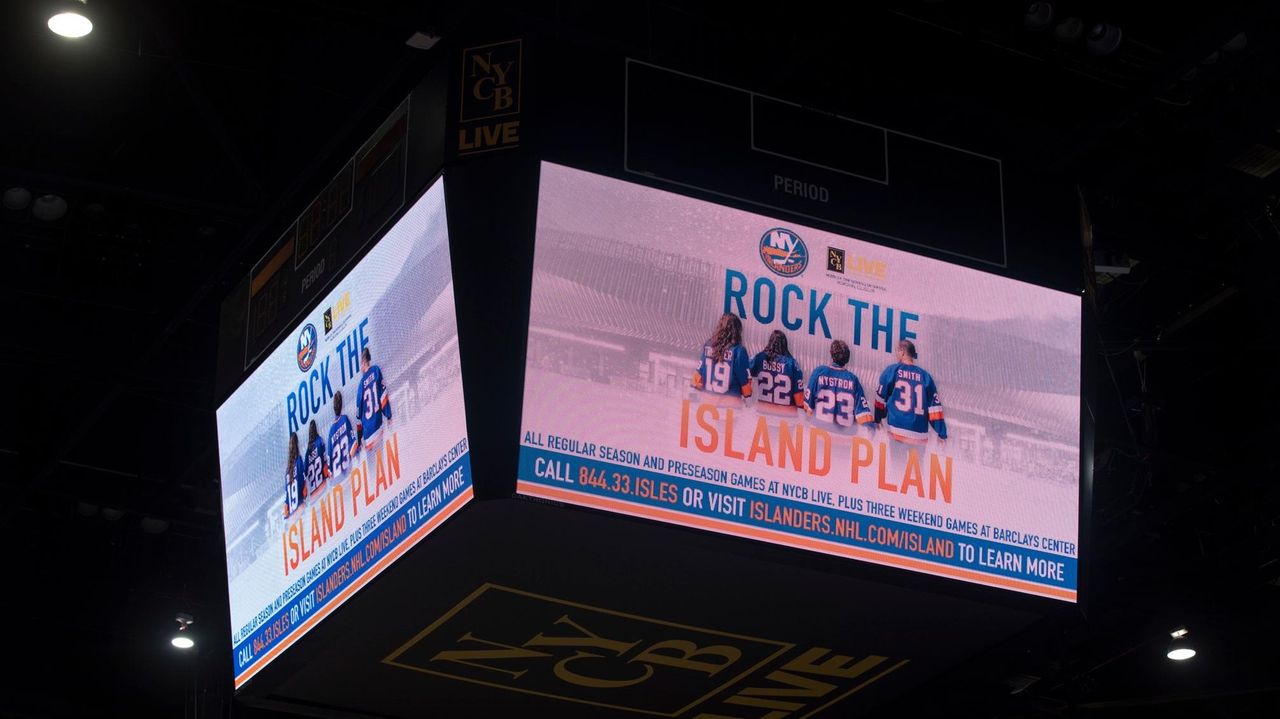 Islanders fans had an opportunity to come to NYCB Live's Nassau Coliseum and check out the view from their potential seats at the renovated arena ahead of the team's part-time return for the upcoming season on Thursday, April 19, 2018 in Uniondale. Credit: Newsday / Chris Ware

Islanders fans who are eager to see their team back on the ice at NYCB Live’s Nassau Coliseum received their first glimpse of that reality on Thursday.

Potential Islanders ticket holders toured the renovated arena and some even picked their seats for when the Islanders return home next season.

The Islanders are slated to play 60 games over the next three seasons at the Coliseum as part of a split schedule with Brooklyn’s Barclays Center, their home for the last three seasons — a sore point for many Long Islanders.

“I didn’t go to one game” in Brooklyn, said Steven Schwartz of East Northport. “I didn’t even try. Imagine that. I didn’t want to.”

But there was Schwartz at the Coliseum on Thursday afternoon to see what seats and ticket plans were available that include the 13 Islanders games scheduled to be played this coming season at the Coliseum, the arena the Islanders called home from 1972 until 2015.

After the Islanders left the Coliseum for Brooklyn, the Uniondale arena underwent an 18-month, $180-million renovation by Brooklyn Sports & Entertainment. That group also is responsible for selling Islanders tickets for one more season through an arrangement with the team.

Schwartz said he was an Islanders season-ticket holder for nearly 30 years before they moved to Brooklyn. Instead of commuting, he watched the Islanders on television.

But when Gov. Andrew M. Cuomo brokered a deal in January in which the Islanders would effectively split their games over the next three seasons between the Coliseum and Barclays Center, Schwartz decided he was interested in returning to the Coliseum, too.

“It’s only a half-hour drive here as opposed to getting to Barclays, which is a lot longer and a lot more complicated for someone out in Suffolk County,” Schwartz said. “I feel like it’s in my interest to get in as many games as I can while they’re here visiting.”

Schwartz is not alone in that thinking, according to Dan Lefton, Brooklyn Sports & Entertainment’s senior vice president of ticket sales, strategy and operations.

“We have a fan base that has missed having the team out here,” Lefton said. “We’ve had a lot of re-engagement from people who maybe the travel to Brooklyn was a little challenging.”

As part of the deal announced by Cuomo in January, the Islanders will play 13 games at the Coliseum this season — 12 regular-season games in addition to a preseason game.

The Islanders will also split the following two seasons between both arenas before, according to Cuomo, playing their first game at their new Belmont Park arena during the 2021-22 season.

Although Lefton did not provide specific ticket figures, he said sales for the 13 Islanders games at the Coliseum next season are double what they expected at this stage.

He said fans are being offered a 16-game package that includes all 13 Coliseum games plus three in Brooklyn. He said those games at Barclays are on the weekend to make it easier for Long Islanders.

Another fan who came to the Coliseum on Thursday afternoon, Michael Hundert of Great Neck, has been an Islanders season-ticket holder in Brooklyn and didn’t like being surrounded on many weeknights by empty seats and fans of the visiting team.

The Coliseum’s capacity was reduced from more than 16,000 to 13,900 — one reason why the NHL doesn’t view it as a long-term option — but Brooklyn Sports & Entertainment believes in the short term the smaller crowd will benefit those fans who come to games.

After touring the renovated arena for the first time, Hundert agrees.

“The last time I was here, the seats were low to the ground and broken, so when you sat down it was hard to get up,” he said. “Now the place has new, intimate feel to it. I’m hoping we’ll be able to get to know our neighbors and see familiar faces each game.”