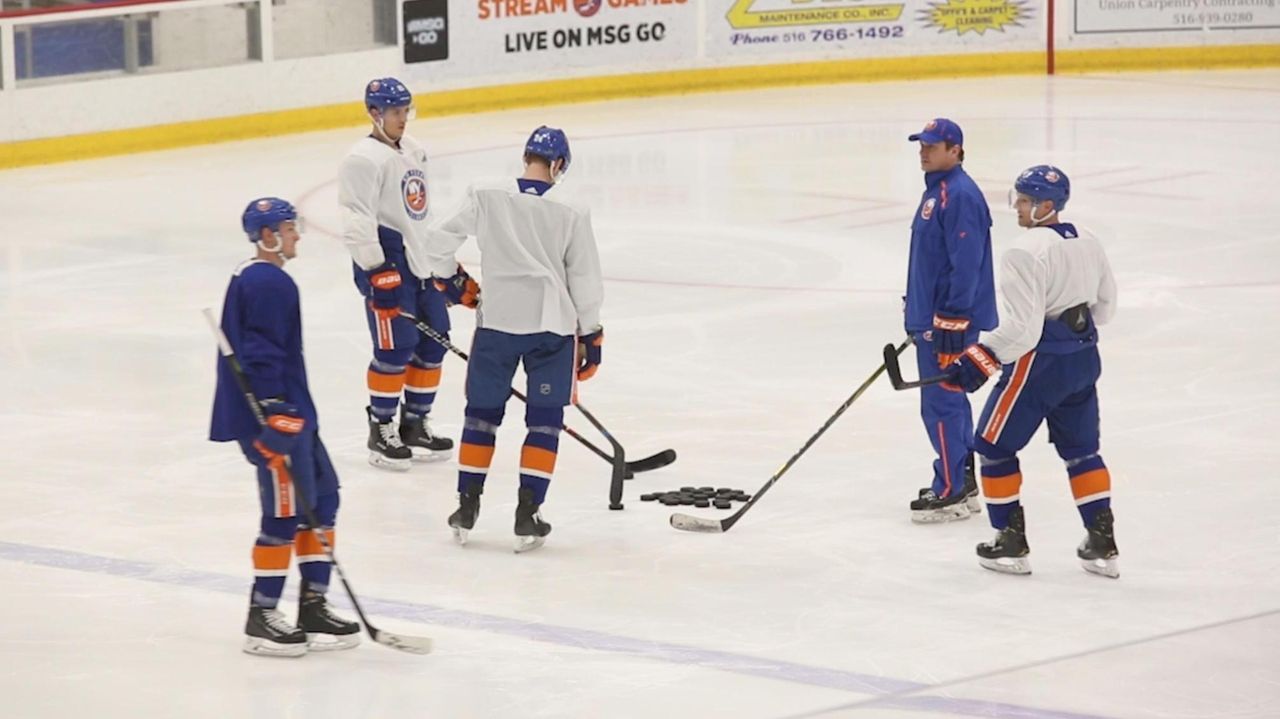 Newsday Islanders beat reporter Andrew Gross says the Isles need to elevate their game during the playoff push to not only get into the playoffs but gain home ice advantage. Credit: Newsday / Casey Musarra

Islanders goaltender Robin Lehner took a shot, now he is issuing one — at the Ottawa player who put him into concussion protocol and the league Lehner believes has done little to protect goalies from opposing players.

Lehner participated in practice Wednesday for the first time since March 5 when the Senators’ Brady Tkachuk flattened him, allowing Jean-Gabriel Pageau’s game-tying goal late in the third period. The Islanders won in a shootout.

A source confirmed that Lehner, who is 20-11-5 and third in the NHL with a 2.19 goals- against average, was placed on the league-mandated protocol for head-related injuries. Lehner said he is “100 percent,’’ but anticipated a few more days of practice.

Barry Trotz did not rule Lehner out of Thursday night’s game with the Canadiens at NYCB Live’s Nassau Coliseum. Christopher Gibson was returned on loan to Bridgeport.

As Lehner saw the incident, Tkachuk was barreling toward him. Brock Nelson chased Tkachuk from behind and Nelson’s stick touched Tkachuk’s back in a slight push.

“I think it’s a joke because at the end of the day [Tkachuk] puts his trajectory towards me,’’ Lehner said. “No matter if [Nelson] is there pushing. It’s a battle, but is he taking the trajectory right towards me. He doesn’t try to slow down. He doesn’t try to move out of the way. Because, as I said, we all know he was going straight for me.

“There’s no denying it and, again, I’m not complaining about it. It’s part of the game [but] maybe I need to brace myself next time and start using my blocker or use my stick and see what happens. But again, this is a problem around the league that a lot of goalies get run into like that.’’

Asked if he thinks the NHL should look into the matter, Lehner said, “You look around at all the different hits, all the different stuff, it’s so inconsistent. I’ve seen plays where players are holding goalies’ pads and sitting on them and it’s still a goal. I don’t think they [NHL] really know what they’re doing.’’

Lehner gave few specifics about his injury or the ensuing symptoms. “It doesn’t really matter, I’m back now,’’ he said. “I’m just happy I’m not out longer. It happened towards my neck. I was more worried about my knees, like my left knee got put in a really bad position. Plays like that, all of a sudden you turn a knee and your career’s over.’’

Trotz said he was not aware of what Lehner said about the play or whether such collisions require league intervention. “I don’t know if it needs to be addressed going forward,’’ the coach said. “I just know this from the goaltending standpoint: They [referees] have to make those calls now around the league. It’s a player safety thing. There’s going to be collisions. I know in Robin’s case the Ottawa player was heading to the net hard. Our player gave him a little push, too. If our player doesn’t push him there’s probably a penalty and maybe, who knows, a suspension.

“I trust the league, they’re watching us. They’re not dumb. They do a real good job of looking at that.”