Dec. 20, 2017: A development team led by the Islanders wins a bid to build an arena at Belmont Park.

Aug. 14, 2019: The Franchise Oversight Board, a state agency that oversees the New York Racing Association and all activity at Belmont, issues the final series of approvals on the project.

Sept. 10, 2019: The Village of Floral Park files a lawsuit against the state to block construction of the arena. In the suit, the village argues the public bidding process was flawed and tipped in favor of developer New York Arena Partners due to a "secret plan" conceived before the state issued a request for proposals. The suit also claims the state's final environmental review did not fully study the impact of the new Elmont Long Island Rail Road station that will be built on the site of the racetrack's north parking lot.

Sept. 22, 2019: Elmont civic leaders file a lawsuit against ESD, developers New York Arena Partners and others to stop construction on the arena, claiming the state does not have the authority to designate its own land at Belmont for private development.

Nov. 1, 2019: Floral Park asks a judge for a temporary restraining order to immediately stop certain construction activities. The village claims residents were "suffering real and significant adverse impacts" as a result of the construction.

Nov. 7, 2019: A state Supreme Court justice denies Floral Park’s request to immediately stop construction activities, saying that the village did not present enough evidence that those activities will cause "irreparable harm" as its lawsuit continues.

March 27, 2020: Construction at the arena — and all-non-essential construction in New York — is stopped as part of the state’s response to the COVID-19 pandemic.

May 27, 2020: Construction resumes at Belmont Park after a two-month halt.

May 13, 2020: The last lawsuits filed by the Village of Floral Park and various civic groups are tossed, eliminating all legal challenges to the project.

July 22, 2020: UBS and the Islanders agree to stadium naming rights.

June 9, 2021: The large "UBS Arena" sign on the building’s west side is put into position. 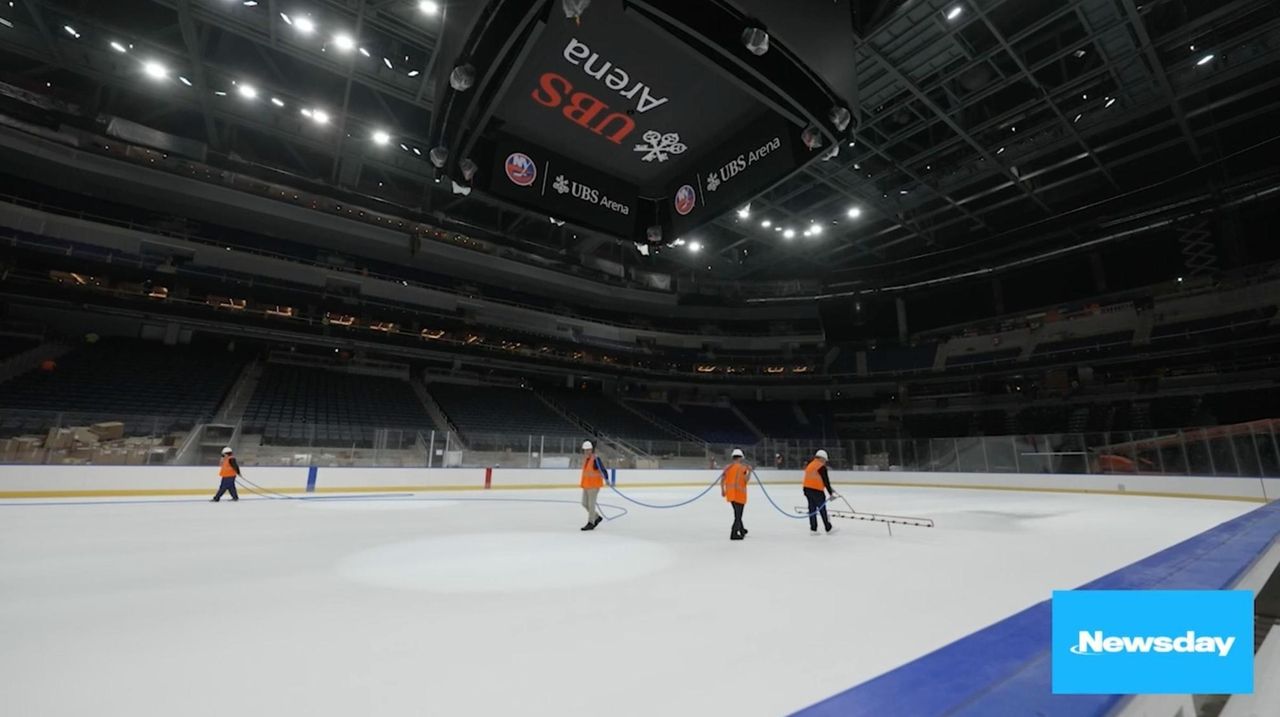 Ice put down at UBS Arena for Islanders' new home venue 10,000 gallons of water are used to make one inch of ice over the 16,300 square feet of arena surface, the team said.The first game at the venue will be Nov. 20. Credit: New York Islanders

Oct. 20, 2021: The Islanders’ championship banners and retired numbers are raised to the rafters. 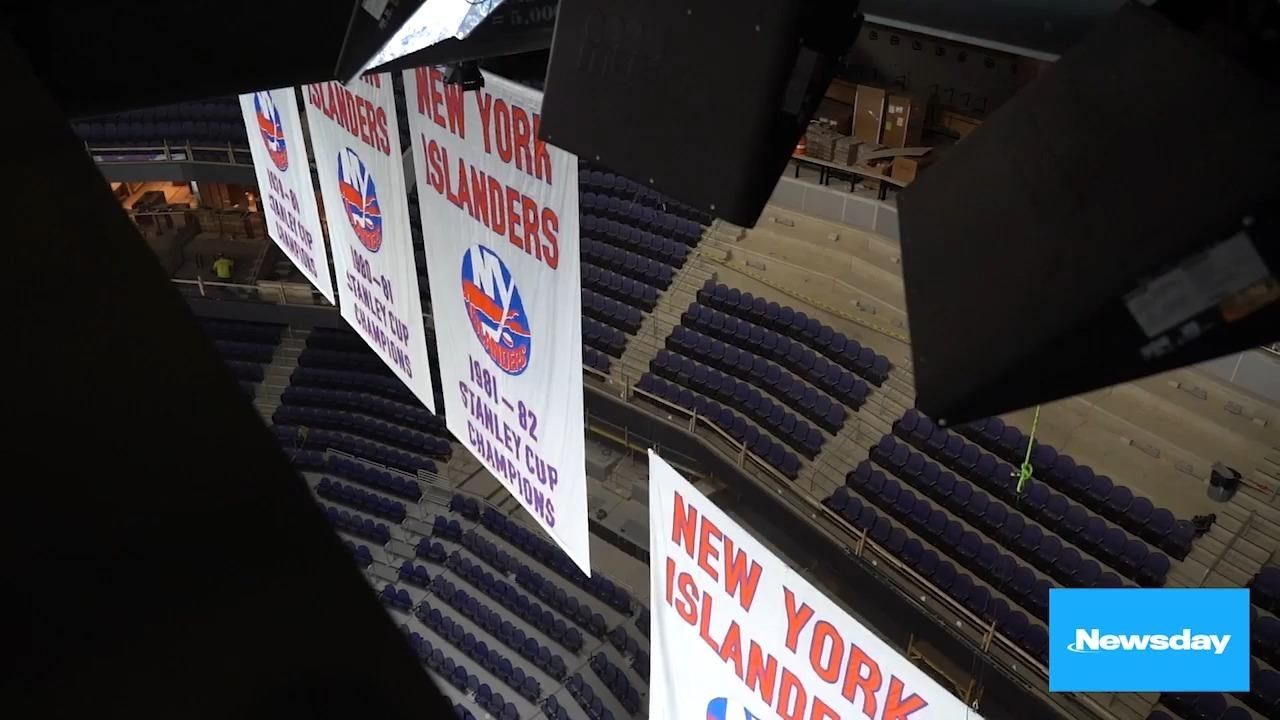 Isles raise the banners to the UBS Arena rafters The next phase of construction at the Islanders' new home at UBS Arena at Belmont Park was raising the championship banners and retired jerseys to the rafters.  Credit: New York Islanders

Nov. 16, 2021: The Long Island Railroad's new station at Elmont, which was built to coincide with UBS Arena's construction, officially opens. The station, about three-quarters of a mile north of the arena, is the first new LIRR station in 50 years. 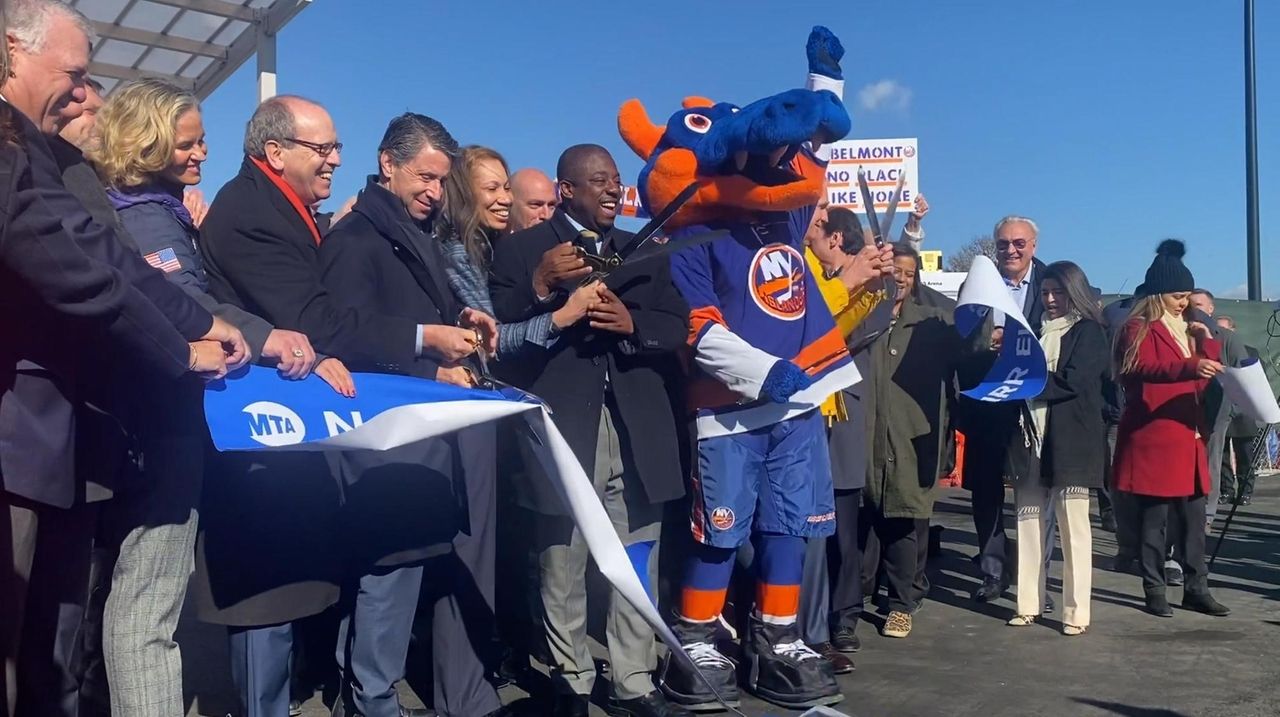 Take the train to the game Officials on Tuesday celebrated the new Elmont LIRR station with a ribbon-cutting, days before the first Islanders game at the UBS Arena. Newsday's Cecilia Dowd reports. Credit: Newsday staff

Nov. 17, 2021: A day after it opened, the new Elmont train station is renamed Elmont-UBS Arena Station after the Metropolitan Transportation Authority Board unanimously approves a $1.75 million, 10-year deal giving naming rights for the new stop to New York Arena Partners.

Nov. 20, 2021: The Islanders host the Calgary Flames in their first home game at UBS Arena. 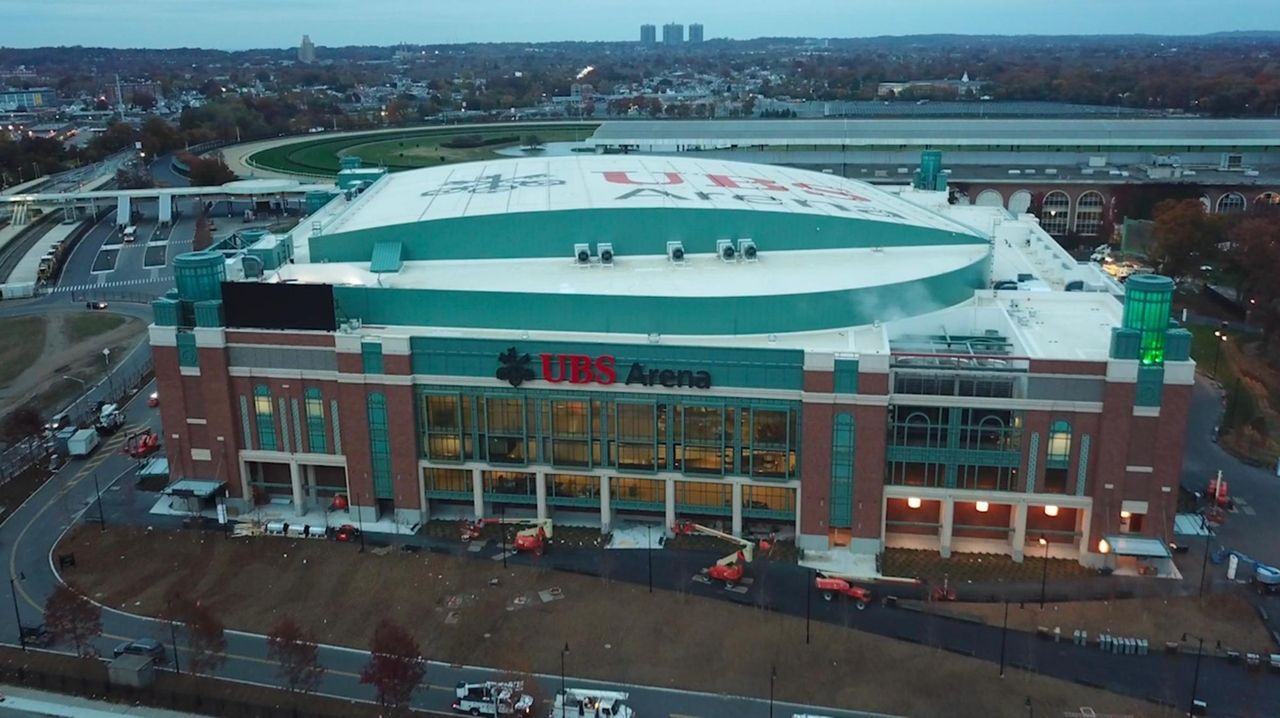