Mark Worhle, right, and his son Chris Worhle, each of Farmingville, are shown at the UBS Arena construction site on Feb. 12, 2021. Credit: Chris Ware

The bonds that unite Farmingville’s Mark and Christian Worhle run deeper than their father-son relationship.

Christian followed his dad into the Local 25 electrician’s union, but it's the Islanders that have always been the emotional centerpiece.

"He was born with an Islanders jersey on," Mark Worhle said.

Now, their favorite team also has made them first-time co-workers as they direct the Bana Electric Corp. crew at the under-construction UBS Arena at Belmont Park. It was important enough for Mark Worhle to delay retirement for this last job. 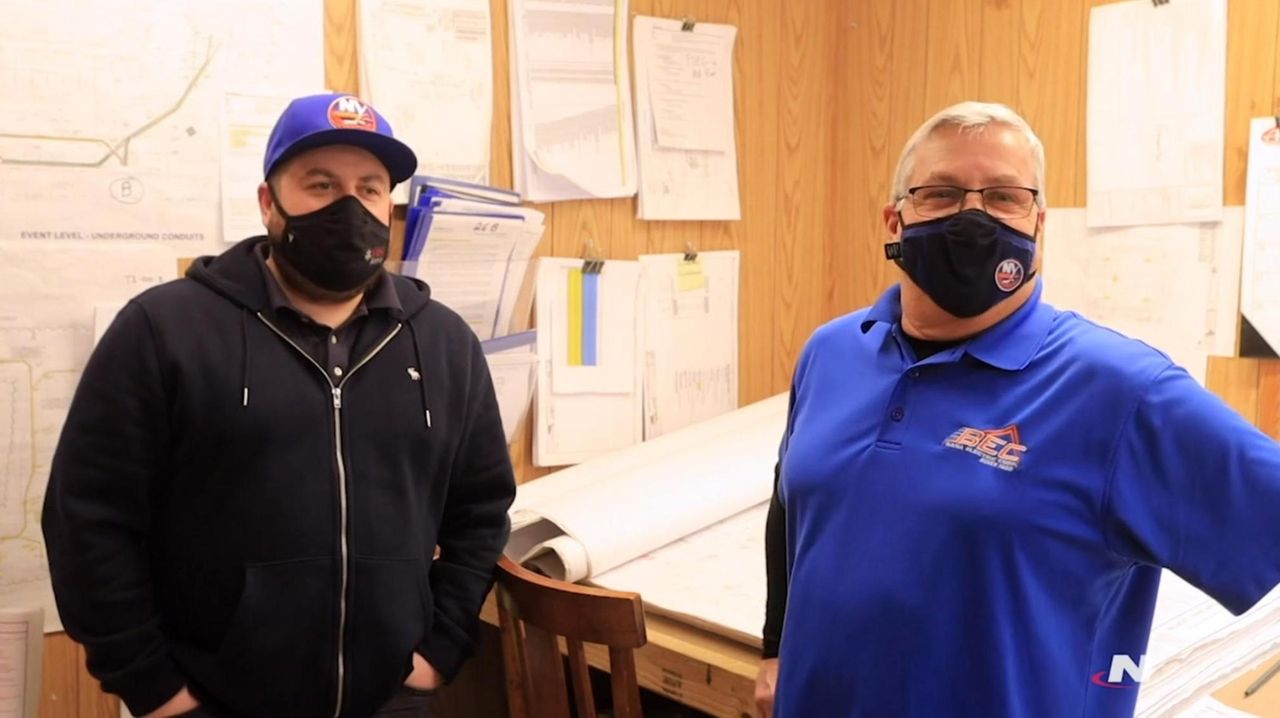 So, while the $1 billion project represents a state-of-the-art home and path to greater revenue for the Islanders compared with the outdated Nassau Coliseum, the new building is much more personal for the Worhles: It will be part of their family legacy.

"It’s going to be hard to compare to anything," Christian Worhle said of attending a game there. "The first time in the arena with him and my [hockey-playing, 6-year-old] son, the emotions will be high. There will be a sense of accomplishment there. The history of that building will always be that I helped build that with my father. Even my son, I go home and show him pictures. He’s a part of it."

Having a chance to work on a new arena for the Islanders – who featured the Worhles in their "Built For Fans By Fans" video series – has long been a goal for the 64-year-old father, who grew up in Seaford and played high school games at the Coliseum. Once, he thought he would get his chance on the never-started Lighthouse Project championed by late Islanders owner Charles Wang.

"He always talked about doing the arena," said Christian Worhle, 38, who played hockey at Sachem North High School. "He hasn’t shut up about it for 10, 15 years. Ever since Charles Wang brought up The Lighthouse, he wanted it."

Mark Worhle’s love of hockey predates the Islanders, who joined the NHL in 1972. At first, he was a Rangers fan and his first in-person experience came via the now-defunct Long Island Ducks of the Eastern Hockey League. His high school team practiced at the same Farmingdale rink the Islanders did.

He’s been a member of Local 25 for 42 years and joined Farmingdale-based Bana Electric 26 years ago.

"Before this project, I went to my union hall and said I was going to be done," said Mark Worhle, who plans to resume playing rec league hockey once he retires. "That was April [2019]. But since the Lighthouse Project, I always told my office, ‘If we get the job, I want to be the guy.’ I was surprised. I didn’t think we’d get the contract."

But Bana Electric did, in August 2019. Mark Worhle, as general foreman, was on the job site that month. By the first week of September, he and Christian Worhle, the project coordinator, were setting up a trailer office now decorated with Islanders’ memorabilia and newspaper clippings.

"I was totally like, ‘It’s up to you. If it makes you happy.'" said Mark Worhle’s wife, Patricia, of his decision to delay retirement. "Of course, I’d rather be on vacation right now than him working. But how can he pass this up? It’s a great job to retire on. He never complained about his job one day. He loves it."

Mark Worhle supervises a 76-person crew. Christian Worhle works on the three-dimensional modeling while supervising how those designs align with the practical installations.

"I’ve been in the Local for almost 20 years, but we never crossed paths," said Christian Worhle, who has four children with his wife, Lauren. "We both tend to be the guys in charge of a job. This came around and we had the ability to both step in and be in charge of different things."

"They’ve always bonded," said Patricia Worhle, who also has two daughters with her husband. "[Mark] coached every hockey team, every soccer team our son was on. They butt heads, that’s for sure. But working together has been really amazing. I didn’t expect it to go so well but it really has gone very nicely. Doing it for the Islanders makes it even better. Chris always ran his own work. But Mark wanted Chris to be on the job with him."

UBS Arena, which experienced one construction delay because of the COVID-19 pandemic, is targeted to open in November.

"It’s going to blow the Coliseum away," Mark Worhle said. "Two concourses. So many bathrooms. The roof is so low. It’s going to be loud. [The renovated Coliseum] is different because it’s smaller and the outside is weird now. I hated Barclays. Now, they’re going to have a real home again."

See the progress on Isles' UBS Arena at Belmont Park constructionA look at the latest from the construction site of the Islanders' future arena at Belmont Park. Island Ice Ep. 73: Talking Isles with NHL.com's Brian Compton Host Andrew Gross is joined by NHL.com writer Brian Compton, who grew up on Long Island, to talk about the Islanders' season so far.