An early group worked with the goalies for about 20 minutes before the Islanders began Thursday’s practice. That’s the typical routine. What wasn’t usual, though, was having the rest of the players line the team’s bench to watch, or having injured defenseman Ryan Pulock, on crutches, remain there to watch the full session.

The Islanders have waited a long time to open a new home rink — arguably since the 1990s — and that excitement showed as the team stepped onto the ice to conduct a high-energy, lively first practice at UBS Arena. The gala home opener following a 13-game road trip will be Saturday night against the Flames.

"I had no expectation because I hadn’t seen it, so it was kind of nice just walking in and being a complete surprise today," Mathew Barzal said. "It absolutely blew me away. I walked right in, saw the gym, saw our eating area and I couldn’t wait to see more. The entire facility and the rink and how it’s set up is so high-end, I can’t even tell you how nice it is down here. We’re a pretty lucky group."

The $1.1 billion arena to replace the antiquated but beloved Nassau Coliseum will host its first event, a private function, on Friday. On Saturday, a sellout crowd of 17,250 will get their first look, ending a winding path to a new arena that included a stop at Barclays Center. The Islanders (5-6-2) will enter their home opener having lost four straight. 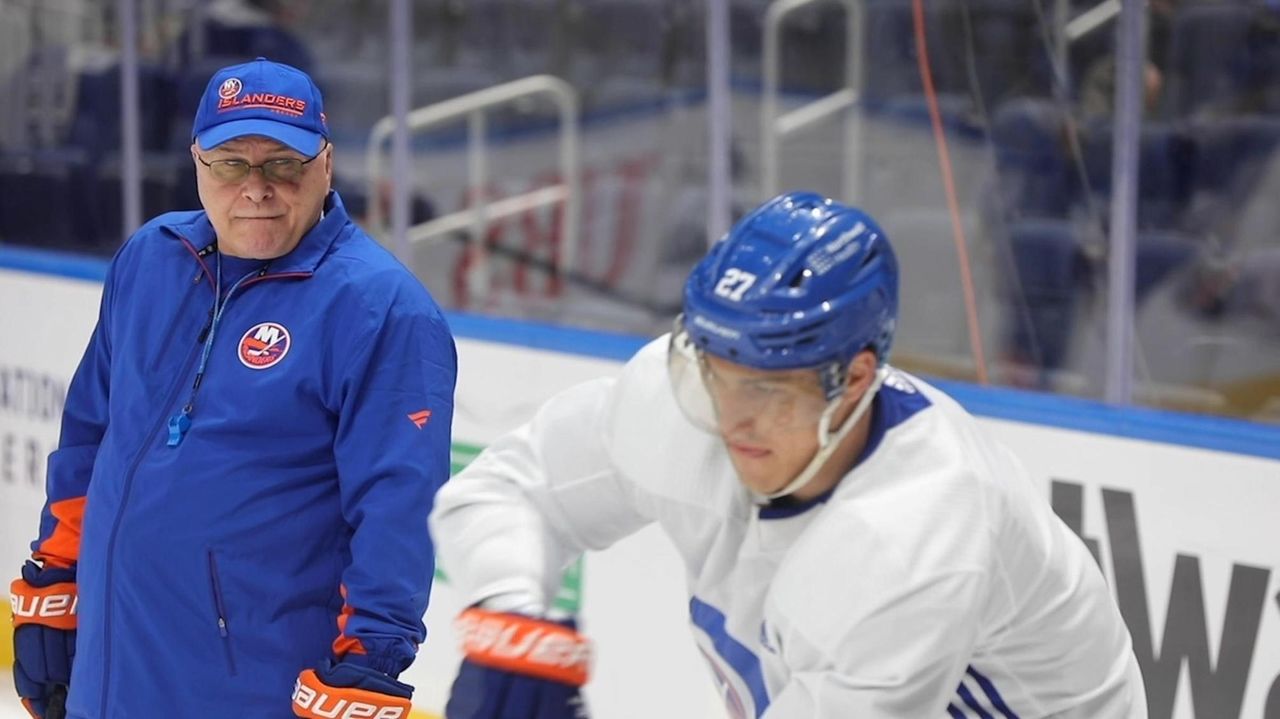 Islanders practice at UBS Arena for the first time The Islanders held their first practice at their new venue, UBS Arena, on Thursday, two days prior to opening the building against Calgary. Credit: Newsday / Reece T. Williams

"We’ve been looking forward to this for a long time," captain Anders Lee said. "The fans have. The organization. To get in here today to have a practice was pretty cool. Walk around the place for the first time and see what everything is about and see how hard everybody’s been working on this place. I’m excited for everyone to get in here and see a game and really enjoy this all together.

"It’s pretty surreal, to be honest. A lot of guys have been here a long time and a lot of talk about a lot of different things and different arenas and half seasons in places. Now, that it’s here it’s almost a little surreal. But I think it’s going to just start feel more like home when we get some people in the stands. That’s what Saturday’s for. But it’s nice to just get our bearings today on the ice."

Off the ice, the players explored their two-story workout room and their new dressing room. Coach Barry Trotz located his office. The team learned where their parking spots were and how to enter and exit the building. There were more than a few wrong turns taken down corridors.

"It was cool," Trotz said. "There was a little pep in the step. Getting lost. Trying to figure out where every office is, every room . . . There’s still a lot of construction going on. A lot of it is finishing stuff, which is normal for any construction."

Midway through practice, goalie Semyon Varlamov skated to his crease and raised a hand to acknowledge a group of construction workers watching the Islanders work.

An inside look at the new UBS Arena UBS Arena in Elmont will open on Saturday, Nov. 20 when the New York Islanders face off against the Calgary Flames, Newsday's Rafer Guzmán got an early look at the new arena. Credit: Howard Schnapp, Johnny Milano

On the ice, Trotz followed his usual practice pattern, starting with breakout drills through line rushes and then special teams’ work. That also allowed the team to test the ice surface, the liveliness of the boards and to get used to the sightlines.

"The ice was good, the sightlines felt good," Barzal said. "Anytime you need to hop into a new rink and you haven’t played there before, it’s a little different and you’re just getting used to it. The more you’re on it, the more comfortable you’re going to be."

Practice ended with an infrequently-used drill limited to one zone, with both nets placed side by side. Coaches often inject that sort of work to allow the players to have a little fun.

Josh Bailey was the only other Islander not to practice besides Pulock. The team’s longest-tenured player remains in Florida, quarantined after testing positive for COVID-19 on Tuesday.

"It stinks," Lee said. "I feel for him. If there’s anyone who deserves to open up this building, it’s Josh. I know he’s going to make his mark on this building when he gets a chance."

An inside look at the new UBS ArenaUBS Arena in Elmont will open on Saturday, Nov. 20 when the New York Islanders face off against the Calgary Flames, Newsday's Rafer Guzmán got an early look at the new arena. Islanders practice at UBS Arena for the first timeThe Islanders held their first practice at their new venue, UBS Arena, on Thursday, two days prior to opening the building against Calgary. UBS Arena: Everything you need to knowComplete coverage of the Islanders' new home and Long Island's newest venue, UBS Arena at Belmont Park.