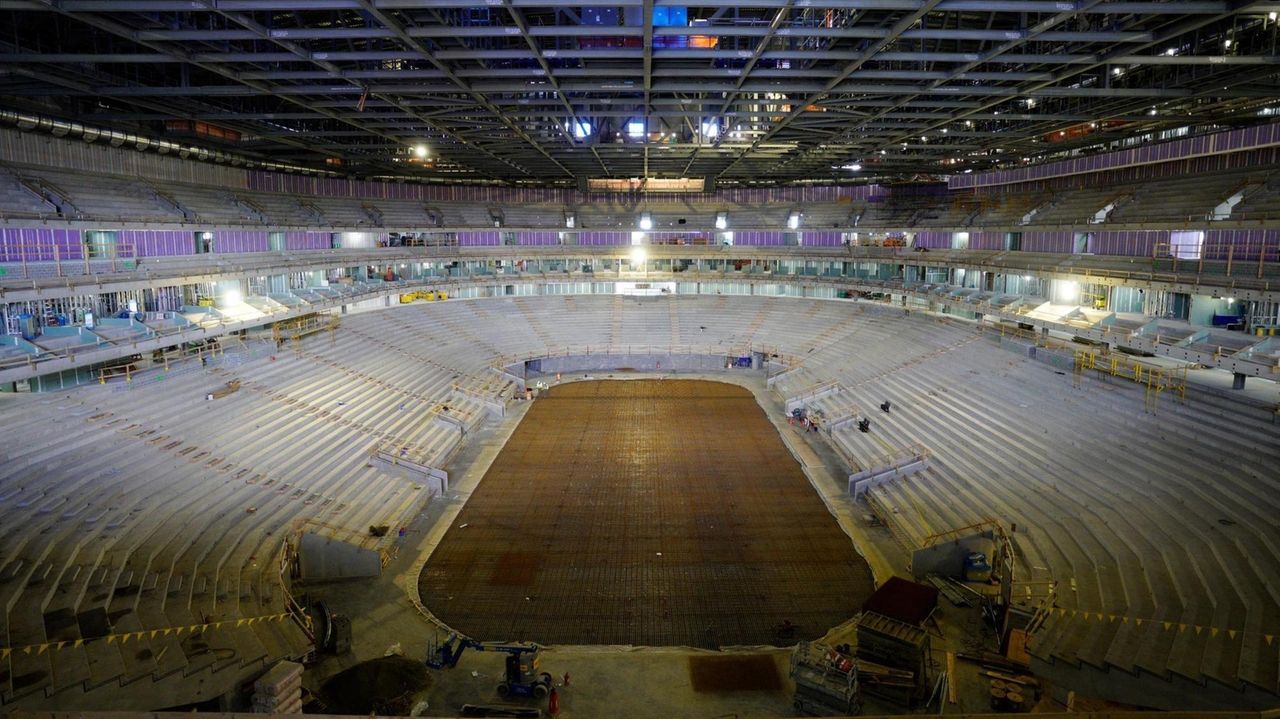 But the CEO of arena development company Oak View Group knows the remaining 25% will be the toughest part with a targeted opening in November.

"We may have to throw some shifts at it," Leiweke said of a workforce that will be going to six-day shifts.

Leiweke, leading a media tour of the facility, is confident UBS Arena will open its doors in November and equally confident the arena will be able to host at 100% of capacity when it does.

Host Andrew Gross shares his thoughts on the Islanders' new UBS Arena after taking a tour of the latest developments in its construction on April 22, 2021.

UBS Arena will hold approximately 17,000 for hockey and about 2,000 more for concerts. Leiweke said he expects to book 60 concerts per year and already has 45. The new building will also host other sporting events such as college basketball and WWE Wrestling and shows such as Disney On Ice.

Leiweke said a priority is to fully enclose the building to allow all the contractors to complete their tasks. The roof has been completed and the outside walls are mostly constructed. But there are still gaps for windows and other finishing touches to be installed.

The piping in the closed-loop system for the ice surface has been installed and concrete will be poured next Thursday to create the ice floor. It will take two months to fully settle.

The scoreboard, 42 feet by 42 feet, has yet to be hung. But UBS Arena has tried to replicate Nassau Coliseum’s intimate feel with a relatively low roof — less than 100 feet high — an expansive lower bowl and a steep, split upper bowl to keep fans as close as possible to the ice.

Michael Sciortino, the senior vice president of arena operations, said the expectation is for UBS Arena to have an exceptional ice surface. Even an above-average one would put it ahead of the ice conditions at many NHL rinks, including the Coliseum.

He said the state-of-the-art piping, combined with a high-level dehumidification system that will increase the airflow in the new building by 80% over the current conditions at the Coliseum, should keep the ice in top condition.

"Lou personally has been leading the charge on our ice, our airflow, our capacity in the building, our chilling plants, the design of the locker room," Leiweke said. "Barry and Lou have been involved with from Day 1."

An outdoor plaza between the grandstand and the arena will hold up to 5,000 for pre-game activities.

And Leiweke said he and Islanders co-owners Scott Malkin and Jon Ledecky will be at the door greeting fans on opening night. He said it will be a proud moment, as well as a vindicating one when the privately-financed arena is ready.

"Most people told us we were wrong [to build]," said Leiweke.

Island Ice Ep. 82: The UBS Arena tour Host Andrew Gross shares his thoughts on the Islanders' new UBS Arena after taking a tour of the latest developments in its construction on April 22, 2021. See the progress on Isles' UBS Arena at Belmont Park constructionA look at the latest from the construction site of the Islanders' future arena at Belmont Park. For Islanders, the Coliseum is a huge home-ice advantageThe Isles are battling the Caps for home-ice advantage in the playoffs, and entering Thursday night's game they were 19-2-2 at home an 10-11-2 on the road.