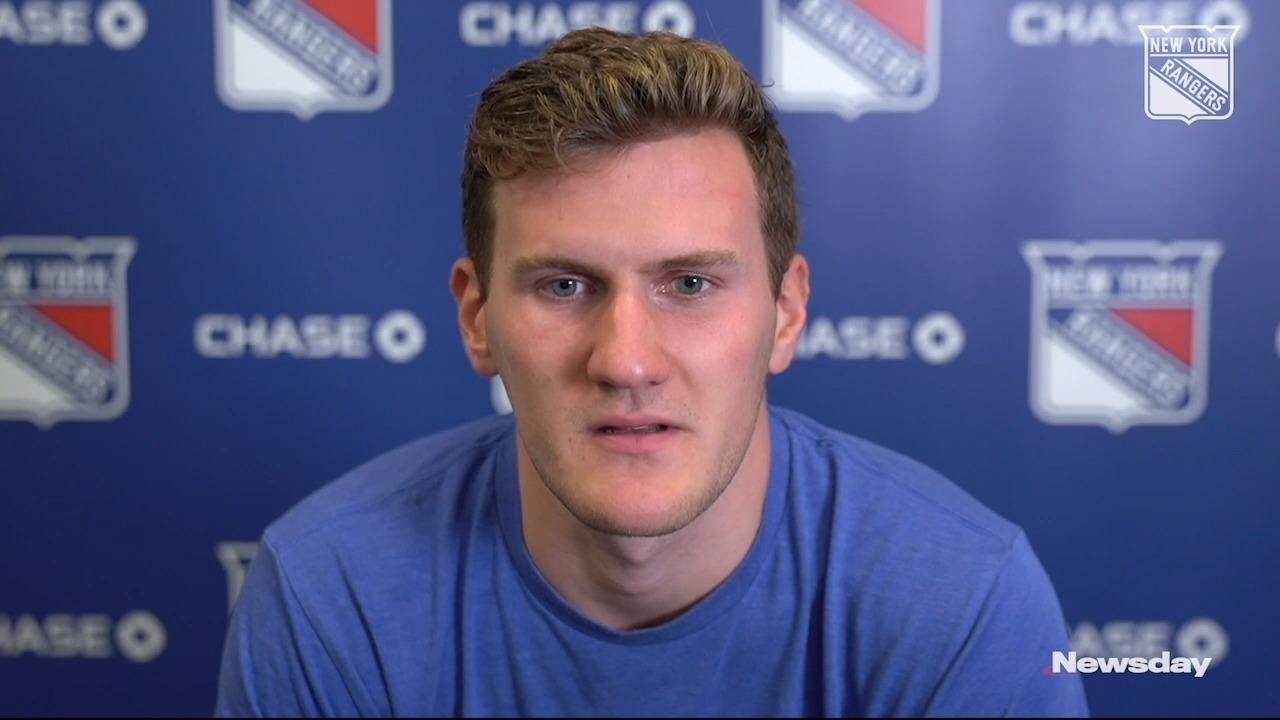 Long Island native and Rangers defenseman Adam Fox said he is not disappointed about not being a finalist for the Calder Trophy as the NHL rookie of the year on July 15, 2020. Credit: New York Rangers

In the final few weeks before the NHL season was halted March 12 due to the coronavirus, as the Rangers were surging into the thick of the playoff race, defenseman Adam Fox started to become, more and more, a player to be noticed on the young Rangers team. It seemed, at the time – to those around these parts, anyway – that when the season was over, Fox would certainly be one of the three finalists for the Calder Trophy as Rookie of the Year, along with fellow freshman defensemen Cale Makar of the Colorado Avalanche and Quinn Hughes of the Vancouver Canucks.

But when the finalists for the award were announced Wednesday, Fox, the 22-year-old from Jericho, via Harvard, was not among them. Instead, it was Hughes, Makar and Chicago Blackhawks left wing Dominik Kubalik who were announced as the top three vote-getters, as voted by the Professional Hockey Writers Association.

“It's obviously a nice award to possibly be recognized for, but, you know, having your name in a conversation like that's special,’’ Fox said after practice, and after the finalists were announced. “You know, it's not something that I really set out to do at the start of the year. [There are] a lot of great players, and, [there’s] not really any disappointment, really.’’

All season long, the race for the Calder has been considered a two-man competition between Hughes and Makar, who were the top two scorers among rookies, with 53 points and 50 points, respectively. Kubalik led all rookies in goals, with 30, and Buffalo’s Viktor Olofsson, also a left wing, had 20.

But Fox had eight goals and 42 points in 70 games – tied for fourth-most among rookies. More than being a point-producer, he had emerged as a top-pair, two-way defenseman over the course of the season for the Rangers while playing mostly with fellow rookie and friend Ryan Lindgren.

“Everybody knew what his offensive ability was gonna be, but when you have a guy of that caliber, who can do the things he can do offensively, and also be a good defender, boy, that makes him a pretty impactful player, in his first year,’’ Rangers coach David Quinn said of Fox.

“I’m disappointed ‘Foxy’ isn't one of the finalists. It's a strong group, I certainly understand that. I'm a little biased, but this guy [Fox] has done an awful lot for us . . . That's not taking anything away from the seasons [Hughes and Makar] have had -- they've had spectacular seasons, too. So it's not an easy thing to do when you've got this extremely talented group of rookies.’’

Quinn, who had coached against Fox when Fox played for Harvard and Quinn was coaching Boston University, said he knew from very early on, as early as the first few preseason games last fall, that Fox would be an impact player for the Rangers.

Fox said he always had confidence in his ability, and felt like he could make an impact in his first year. He was asked if being snubbed as a Calder finalist could serve as chip on his shoulder and drive him to be even better.

“I guess maybe,’’ he said. “It's not really for me to decide any individual award. Just trying to help the team during the season and now going into the playoffs is kind of my focus. I mean, obviously, recognition is nice here and there, but it's not really what I set out for.’’