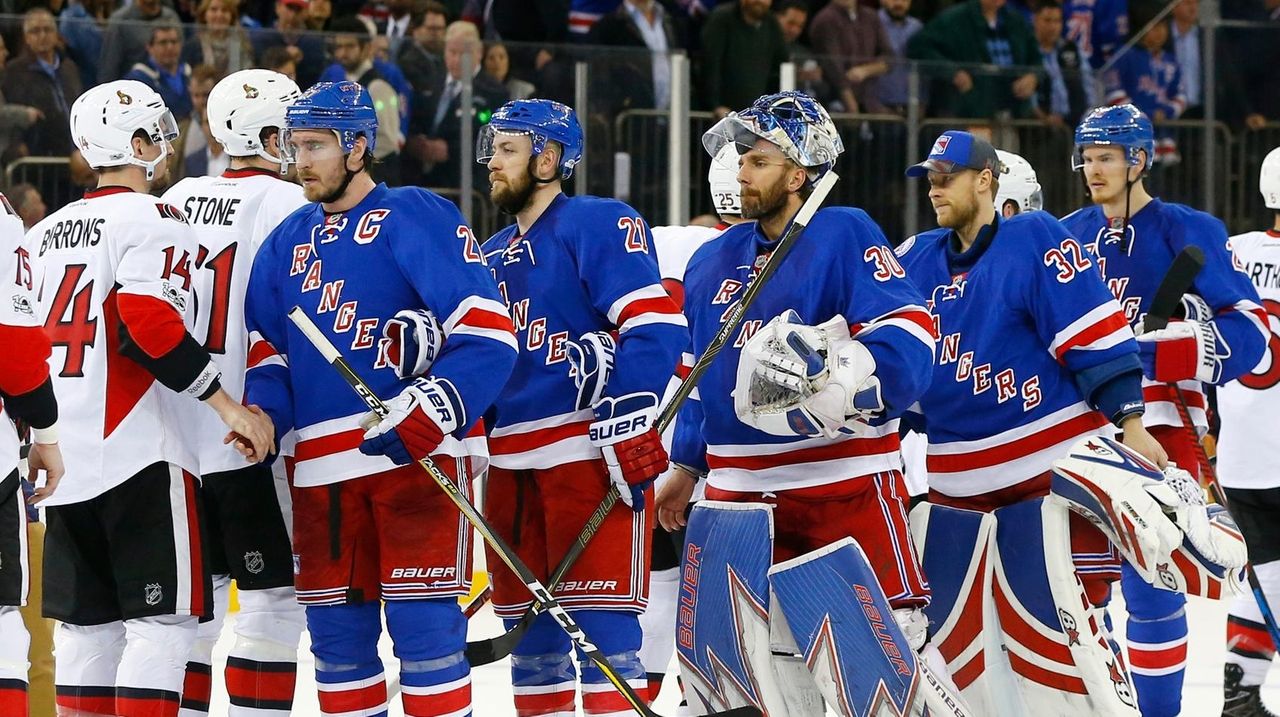 The Rangers' season ended on Tuesday night with a 4-2 loss to the Ottawa Senators in Game 6 of the Eastern Conference semifinals. Team members cleaned out their lockers and reflected on the season on Thursday May 11, 2017 at their training facility in Tarrytown. Credit: News 12 Long Island

GREENBURGH, N.Y. — At every breakup day, there are regrets and hopes, hints dropped, and tea leaves to read. And for this edition of the Rangers, who need to continue the makeover that began last summer, topics that have been simmering rose to the surface on Thursday.

Coach Alain Vigneault said the club will be in the market for another young defenseman, and that Brady Skjei, who is joining Team USA at the World Championships in Cologne, Germany, “should be better and more effective and ready for a bigger role and bigger minutes.”

So is the writing on the wall that veterans Marc Staal and Dan Girardi will play less and on lower defense pairs, if they remain Blueshirts? “I don’t think I have an answer for you today,” Vigneault said. “But it’s something we’re going to look at.”

Girardi, 33, who has three years remaining on his contract worth $5.5 million per season, appears to be a candidate for a buyout. Staal, 30, who generally meets with the press at these gatherings, did not.

Having been ousted by the Senators after game-altering breakdowns and some sub-par efforts in the second round, players expect roster changes, possibly to the core group that has been here for years.

“It’s been a good core group, but you don’t provide a championship in those amount of years and obviously there’s going to be changes,” said Rick Nash, 32, and entering the final year of his contract. “As you get older, I think it becomes ‘the only thing is the Cup’ for your success; when you’re younger you can say it was a good year, you gained some experience. I hope I’m here to see it. I love being a Ranger and New York’s home for me now. I plan on being here, but that’s up to everyone else.”

Rangers captain Ryan McDonagh said: “It’s hard not to think about it, I’ve been here four years. We’ve come close, but this is a results-oriented business, you’ve got to get results. You know the team’s going to do whatever it can to put a team on the ice that it thinks can win.”

Center Derek Stepan struggled in the playoffs. “I wanted to help so bad, you want to be a difference maker, and confidence-wise, that’s rough,” he said Thursday. “I felt I was in quicksand: the more I struggled, the faster I sank.

“We’ve been here as a group for a long time and this world is about winning and we haven’t been able to do it. We’ve been real good and real close, but that doesn’t do us any good,” said Stepan.

Some decisions could be made after meetings with general manager Jeff Gorton in the next seven to ten days. A review of the current roster, his staff, the Hartford Wolf Pack roster and the upcoming expansion draft for the Vegas Golden Knights will be topics in the meetings, Vigneault said.

“I’m still shocked that we’re not playing hockey right now,’ Vigneault said. “It’s going to take me a little time to get over this one . . . Hopefully, we all learn from what just transpired here and that we all get better — coaches included.”

Notes & quotes: Although Vigneault said players such as Chris Kreider, J.T. Miller and Kevin Hayes improved, he said: “The Chris Kreider we saw in the third period of Game 6, boy, I would have liked to have seen him on a more regular basis.” . . . Hayes also will join Team USA in Cologne for the World Championships . . . Unless things change, Antti Raanta, with a year remaining on his contract at $1 million, likely will be exposed in the Las Vegas draft, because teams can only protect one goalie. “Everybody around the league is talking about the draft. I can only focus on that I’m a Ranger. Every goalie in this business wants to be the No. 1 guy, that’s the dream. If and when I’m back here, there’s a guy who’s the No. 1, so it’s a good challenge. I’ll try to be a little better and consistent and hopefully be a No. 1 someday.’’