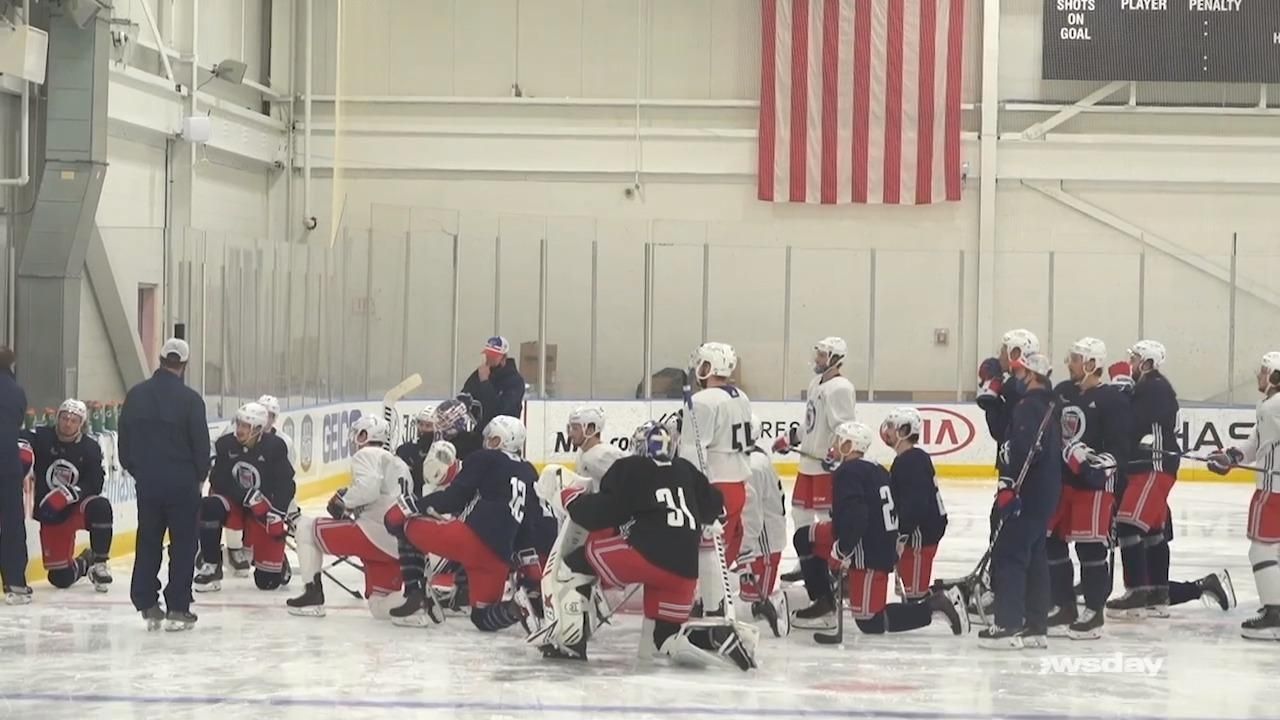 Rangers head coach David Quinn spoke to the media from practice on Friday, Jan. 15, 2021, a day after his team was shut out by the Islanders in the season opener. Credit: New York Rangers

Clearly, Rangers coach David Quinn doesn’t think he has time to mess around.

Just as clearly, he believes that after the thumping his team suffered at the hands of the Islanders on Thursday in the season opener, something drastic had to be done.

Defenseman Tony DeAngelo, who took a double-minor penalty late in the third period of the Rangers’ 4-0 loss, was banished from the main practice group Friday, relegated to skating with the taxi squad. And Quinn’s most reliable defense pair was split up as the Rangers prepared for their do-over game against the Islanders on Saturday at the Garden.

"We certainly are very alarmed at what happened [Thursday] night,’’ Quinn said Friday, acknowledging the balancing act between reacting to a bad loss and overreacting. "That really was a complete shocker to us as a staff. And talking to the players, they were surprised at what developed.

"But we do get to play them tomorrow. Let’s see how we respond."

Alexandar Georgiev will start in goal Saturday, Quinn said, after Igor Shesterkin struggled early in Thursday’s game. Second-year winger Kaapo Kakko, who spent all of training camp on the right wing of the second line with Artemi Panarin and Ryan Strome, appears to be off that unit — and off the second power play — based on the look in Friday’s practice.

"He was on a crowded bus of guys that didn’t have good nights last night,’’ Quinn said of Kakko, though he wouldn’t commit to dropping the 19-year-old.

Alexis Lafreniere, the No. 1 overall pick in the 2020 NHL Draft, seems likely to play with Panarin and Strome.

"We’re not sure,’’ Quinn said of switching Kakko and Lafreniere. "We’re trying different things. It’s early in the season, you’re moving pieces around. Especially after a game like last night, you don’t want to overreact. But that being said, I mean, if someone plays better than you, they should get a better opportunity.’’

Quinn appeared to split up his most reliable defense pair, the second-year duo of Adam Fox and Ryan Lindgren. He had Lindgren with Jacob Trouba and Fox looked to be paired with Jack Johnson. Rookie K’Andre Miller, who partnered with Trouba on Thursday, worked with Brendan Smith, who will enter the lineup if DeAngelo is out.

And there’s another change that may be forced on Quinn. Forward Kevin Rooney, who left the game in the third period after a big collision with the Islanders’ Ross Johnston, did not practice and is day-to-day, the coach said. Phil DiGiuseppe will come in if Rooney can’t play.

Asked what he thought about the hit on Rooney — and one on Filip Chytil — by Johnston, Quinn said, "It’s hard to imagine he didn’t know [Rooney] was coming, but I do want to give the guy the benefit of the doubt.’’ He called the hit on Chytil "excessive.’’

With Rooney out and DeAngelo banished, defenseman Anthony Bitetto and right wing Colin Blackwell practiced with the main roster.

Quinn on loss to Isles: 'Certainly very alarmed at what happened'Rangers head coach David Quinn spoke to the media from practice on Friday, Jan. 15, ...