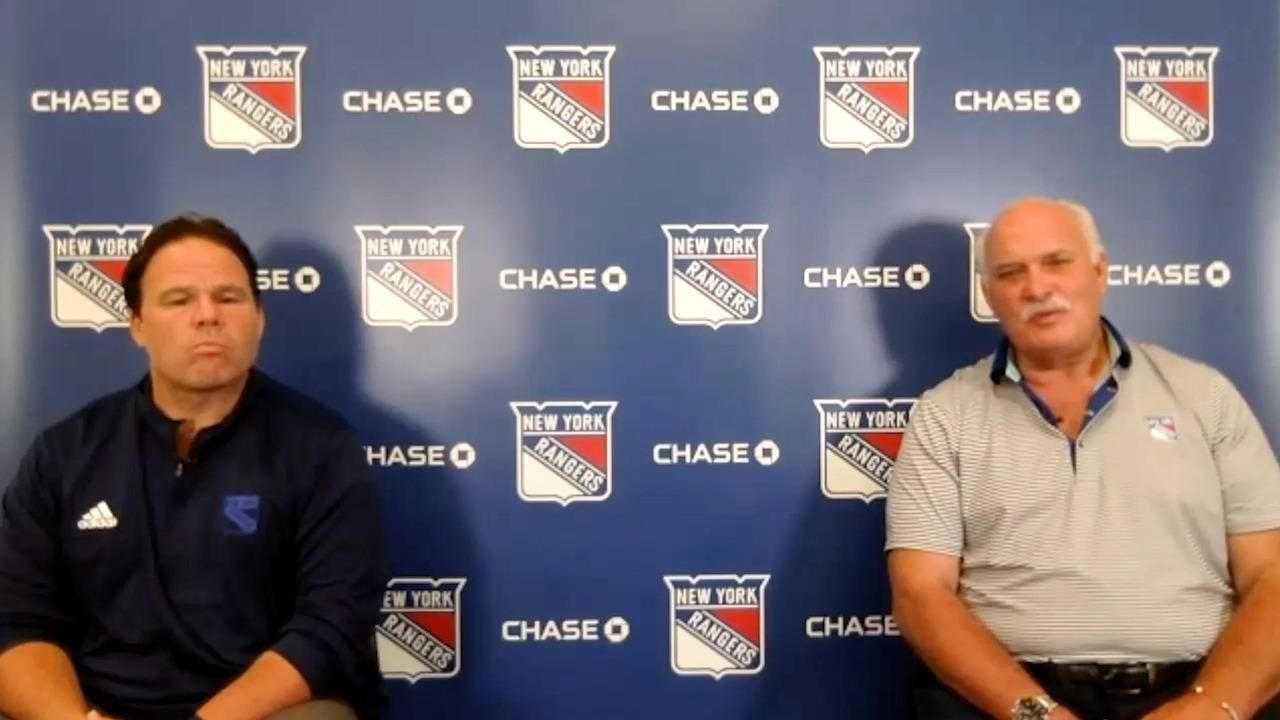 Rangers president John Davidson and Jeff Gorton spoke on Tuesday about winning the No. 1 overall pick in the NHL draft lottery. Credit: Courtesy of the NY Rangers

A week after the Rangers’ season ended with a sweep at the hands of the Carolina Hurricanes, and the day after they won the second phase of the NHL’s draft lottery, earning the No. 1 pick overall and the right to take superstar forward Alexis Lafreniere, Rangers president John Davidson said Tuesday that he has spoken to franchise icon Henrik Lundqvist about the team’s future  goaltending situation.

And he promised the organization will deal with its goaltending question “the right way.’’

“Knowing the professional individual that Hank is, I can tell you that when we got off the plane back from Toronto, I did have a discussion with him,’’ Davidson said on a Zoom call. “We will continue having our discussions to figure out what avenues we're going to take as we move forward. We'll handle things the right way and just move forward with this.’’

Asked to clarify what he meant by “the right way,’’ Davidson said the 38-year-old Lundqvist won’t get blindsided by anything the team does.

“Hank is a great person who wants to be in the know,’’ he said. “We're the type of people who want to do the right thing… We're all getting together here, trying to figure out what we're going to do as a group, and just do the right thing. That's all I meant.’’

Lundqvist, the face of the franchise for most of the last 15 years, was surpassed in 2019-20 by Igor Shesterkin, who came over from Russia last summer, started the season in the minor leagues, and then sparked the team into the playoff race by going 10-2, with a 2.52 goals against average and .932 save percentage after being called up in January.

Lundqvist slipped to third in the goaltending pecking order by the time the NHL season paused on March 12, behind Shesterkin and fellow Russian Alexandar Georgiev.

But when Shesterkin was “unfit to play’’ for the first two games of the Rangers’ best-of-five play-in series against the Hurricanes in the NHL’s restart, Lundqvist, who was 10-12-3, with a 3.16 GAA and .905 save percentage in the regular season, got the call. He played well in Game 1, not quite as well in Game 2, and lost both. Shesterkin started Game 3 and lost, 4-1.

With Shesterkin the new No. 1, and general manager Jeff Gorton saying Tuesday, “We won't go into next year with three goalies,’’ that means either Lundqvist, who has one more year remaining on his contract, with a salary cap hit of $8.5 million, or Georgiev, a restricted free agent with arbitration rights, won’t be returning.

With the NHL’s salary cap remaining flat at $81.5 million for the next two seasons, because of the coronavirus pandemic, it is hard to see the Rangers bringing Lundqvist at his salary to back to back up Shesterkin, especially when Georgiev played well the last two seasons (17-14-2, 3.04 GAA, .910 save percentage in ’19-20).

They could sign Georgiev and then trade him, but that seems unlikely. They theoretically could trade Lundqvist, even if they agreed to keep half his cap hit on their books, but that seems even more unlikely. Buying out the final year of Lundqvist’s contract would save the team $3 million under the cap for ’20-21, and add $1.5 million of dead money to the cap in ’21-22.

Lundqvist could retire, but he would be walking away from $5.5 million owed to him for the season.