GREENBURGH, N.Y. — Igor Shesterkin was the Rangers’ No. 1 goaltender when the NHL halted play on March 12 due to the coronavirus pandemic. And given coach David Quinn’s assertion when the team reconvened last week for the start of Training Camp II that he wanted the team to “pick up where we left off,’’ it’s a reasonable assumption that — barring something unexpected — Shesterkin most likely will be Quinn’s pick to play in Game 1 of the Rangers’ best-of-5, play-in series against the Carolina Hurricanes on Aug. 1.

Shesterkin won’t make that assumption, however.

“I'm working hard every day, playing at 100%, working hard to reach that goal to be back,’’ Shesterkin said Sunday, through interpreter Nickolai Bobrov, the club’s Director of European Scouting. “But, it all depends on the coaching staff. The bottom line is, I'm so happy to be back. No matter what happens, I'll be supportive of my teammates.’’

Shesterkin, 24, was chosen by the Rangers in the fourth round of the 2014 NHL draft to be the heir apparent to Henrik Lundqvist, and he signed with Rangers last summer and came over to North America for training camp last fall. He started the season in the AHL, with the Rangers’ Hartford Wolf Pack farm team, and tore up that league before the Rangers called him up on Jan. 6. 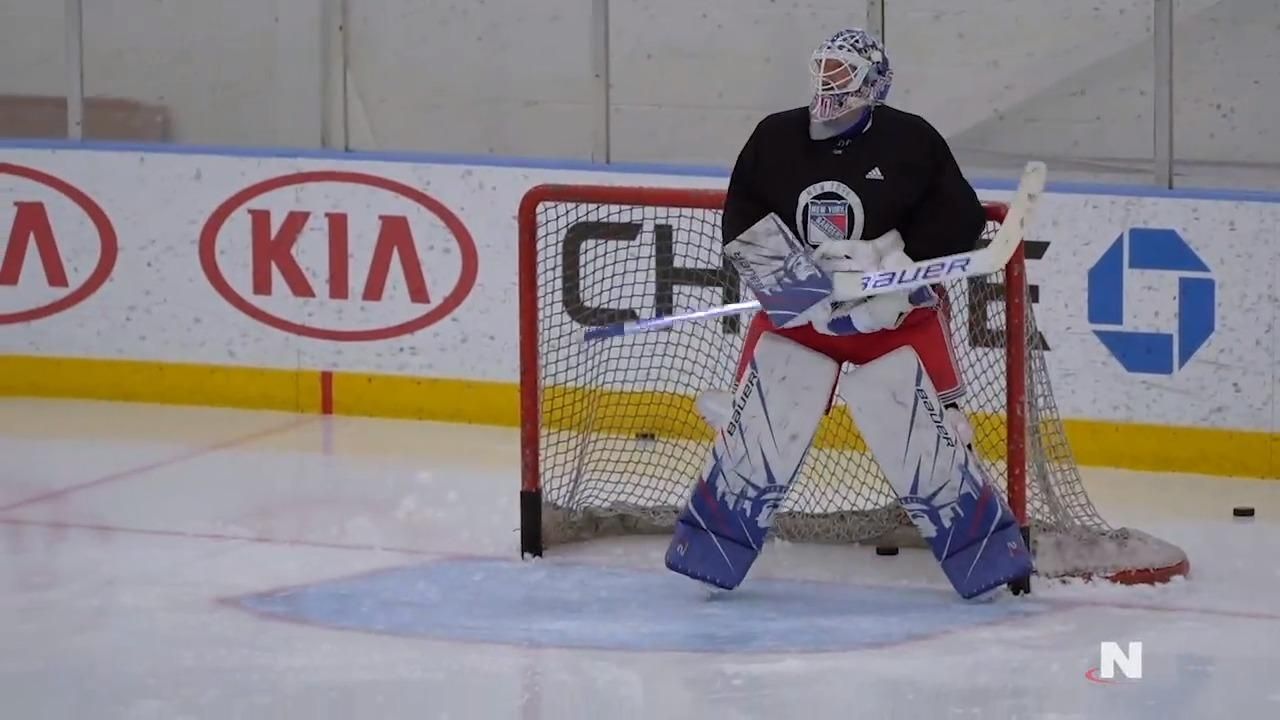 Rangers have a decision to make in net Rangers beat writer Colin Stephenson discusses the Rangers' No. 1 goalie situation and the injury to Pavel Buchnevich after this weekend's training camp practices. Credit: Newsday / Colin Stephenson

In 12 starts with the Rangers, Shesterkin went 10-2 with a 2.52 goals-against average and a .932 save percentage, making him one of the biggest reasons the team was able to claw its way back into the playoff race.

But after the long shutdown, the notion of an open competition for the No. 1 job made sense, especially given the matchup the Rangers got in the NHL’s 24-team restart.

Lundqvist, in his career, has dominated the Hurricanes, posting a 33-12-1 record against them, with a 2.00 GAA and a .934 save percentage, including 3-0 this season, with a 2.33 GAA and .947 save percentage. Add to that, the fact that Lundqvist, and the Rangers’ other goaltender, Alexandar Georgiev, spent the bulk of the NHL pause in Europe, where they had much better access to workout facilities and ice.

Shesterkin never went back to Russia during the pause because he and his wife had issues with transporting their dog on a flight back to Moscow.

“We didn't want to check the dog into the luggage compartment, so we had to stick around, and ended up spending that time in Miami,’’ Shesterkin said.

Limited as he was in working out and skating, Shesterkin nevertheless has looked sharp in the Rangers’ first six days back at training camp.

“I trained during the pandemic very hard with my personal coach,’’ he said. “So my physical shape is at 100%. Now, the key is to bring it to the ice and work on psychological things; work on doing the right things on the ice.’’

The Rangers are scheduled to have Monday off, and Quinn said the coaches will get together and talk about how to proceed during the final week of practice before the team leaves for Toronto on Sunday. When they get to Toronto, they’ll have just one preseason game, July 29 against the Islanders, and since they won’t be able to split that game three ways between Shesterkin, Lundqvist and Georgiev, they’ll have to make some decisions about the goaltending situation before then.

“We'll probably sit down here on Monday . . . to talk about things of that nature,’’ Quinn said. “I think there's a lot of things we [want to] re-address here after spending a week together, and having the week of practices and kind of getting a feel where we're at. That's something that we'll talk about.’’

Rangers have a decision to make in netRangers beat writer Colin Stephenson discusses the Rangers' No. 1 goalie situation and the injury to Pavel Buchnevich after this weekend's training camp.