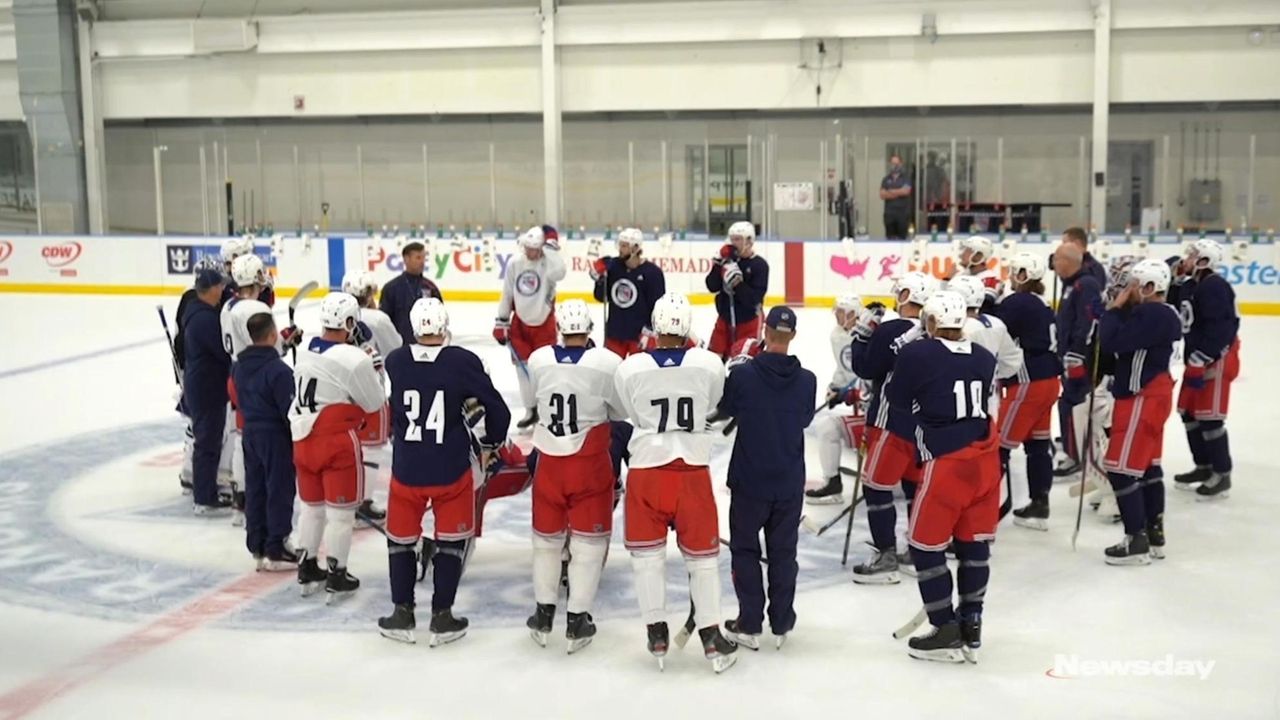 Newsday's Colin Stephenson says it appears the Rangers have chosen their goaltender for the first game of their Stanley Cup qualifier series on Saturday against the Carolina Hurricanes. Credit: Newsday / Colin Stephenson & NY Rangers

GREENBURGH, N.Y. — After two weeks of a training camp that coach David Quinn insisted was not a training camp, the Rangers had one last, brief skate at their practice facility Sunday.

Then it was off to Toronto and the NHL bubble for the league’s restart. After 4 1⁄2 months of no games because of the coronavirus pandemic, the Rangers will play a practice game against the Islanders on Wednesday and then, finally, will begin their best-of-five qualifying series against the Carolina Hurricanes at noon Saturday.

“It’s a little surreal,’’ defenseman Marc Staal said in one final, post-practice Zoom call before the Rangers boarded a bus to take them to their charter flight to Toronto. “[After] half a summer, not knowing what was gonna happen, and now that the day is here [to leave for the hub site], I think everyone’s pretty excited. I think the energy around the room was kind of giddy and guys were excited to get there. The last week or so, you’re kind of just waiting to go.

“I think everyone’s itching to play competitive hockey again. To be honest, you can only practice so long before you want to, you know, hit someone or make an impact that way in a real game.’’

The Rangers reported to their practice facility on July 13 for the start of Phase 3 of the NHL’s return-to-play plan, a training camp to prepare for the league’s restart. On that day, though, Quinn told reporters that he didn’t consider it a training camp. He saw the Rangers as picking up where they left off when the league paused play March 12.

The Rangers had pulled within two points of a playoff spot with 12 games remaining at that point, and Quinn said he was confident the team would have made the playoffs if the season had continued. So over the last two weeks, he kept the same lines and defense pairs that had been together before the pause.

On Sunday, Quinn said he hadn’t learned anything new about his group from the last two weeks. He said the coaching staff was “pleasantly surprised’’ at how well conditioned all the players were after all the time off.

“I think we all thought the worst might happen, and that certainly wasn’t the case for us,’’ he said. “I thought we were relatively sharp from the get-go. And then obviously the two first scrimmages we had were sloppy and, you know, the last one was certainly more game-like.

Notes & quotes: Alexandar Georgiev skated with the extra skaters, leaving Igor Shesterkin and Henrik Lundqvist as the goaltenders with the main practice group. “I just wanted two goalies in the nets today,’’ Quinn said. “I wanted to give everybody shots.’’ He coach still refused to name a starting goaltender for the Carolina series, but all week, Shesterkin got more practice time than the other two goalies . . . Everyone attending the camp went to Toronto except D K’Andre Miller, who was ineligible to go, and G Adam Huska.