Perhaps it would be frustrating for the Senators no matter who was beating them to pucks and producing offense for the Rangers right now. But the collection of pluggers who cashed in early and often in the Rangers’ Game 4 win Thursday night to even the series are not the usual array of offensive weapons.

“We’re just getting the pucks deep, going to work on the forecheck,” said Oscar Lindberg, who had two goals in the 4-1 win and has three in the last two games. “Our whole line is playing really well.”

It was Lindberg, it was Tanner Glass, it was Michael Grabner — perhaps Grabner doesn’t belong on this list, given his 27 goals in the regular season and four in the playoffs — but these are the worker bees on the bottom two Rangers forward lines, and they did the bulk of the damage in sending Senators goaltender Craig Anderson to the bench after two periods and the rest of the Ottawa skaters into a frenzy of frustration.

The Senators vented late in the third, starting all manner of shenanigans. Skilled Senators forward Kyle Turris decided to take a run at Glass late, and Turris was lucky not to get beaten to a pulp by the veteran enforcer. 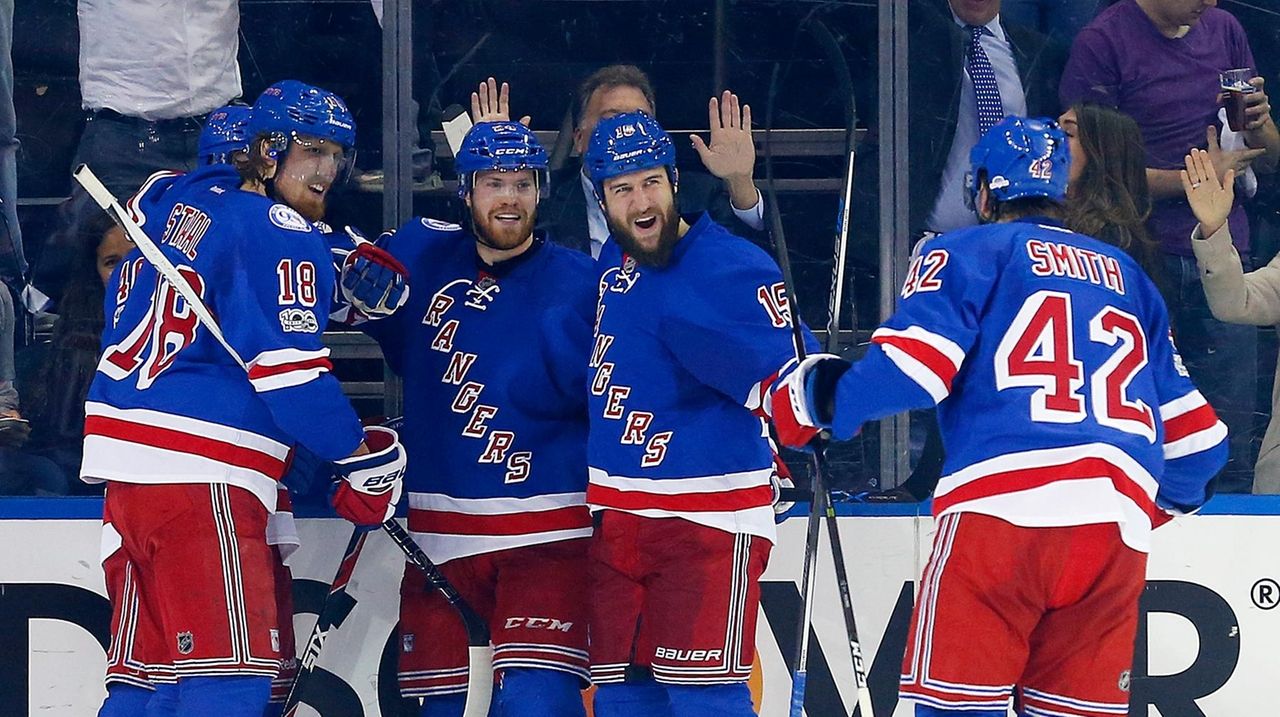 “Mess with the bull,” Glass said, “you get the horns.”

Glass specializes in moments like those, not higher up on the scoresheet. Alain Vigneault inserted him into the lineup for Game 3 to give the Rangers a jolt of physicality, but Glass, who scored the opening goal of the playoffs against the Canadiens, has done much more. He had two assists Thursday night, and his work below the goal line before Lindberg’s soft wrister from the boards beat Anderson to make it 3-0 was a thing of beauty.

Considering Glass spent the majority of this season in the AHL, it’s remarkable that he has a goal and three assists in five playoff games. “I don’t think I’ll be able to do that until it’s over,” he said of how he could assess his crazy season. “I just try to be consistent every night and stick with that.”

Grabner used his blazing speed for an early breakaway that Anderson denied, but it was only the first of a half-dozen odd-man Rangers rushes with the game still in the balance. The Senators have no answer for Grabner and his speed.

“I think he slowed down a little to wait for me,” Lindberg said of his two-on-none feed from Grabner to make it 2-0 early in the second.

Rangers even series with Game 4 victory over Sens

“My speed, that’s the thing I’ve always had. I’m just trying to use it a lot,” Grabner said. “Our whole team can skate.”

And score, it seems. Even the guys you least expect.