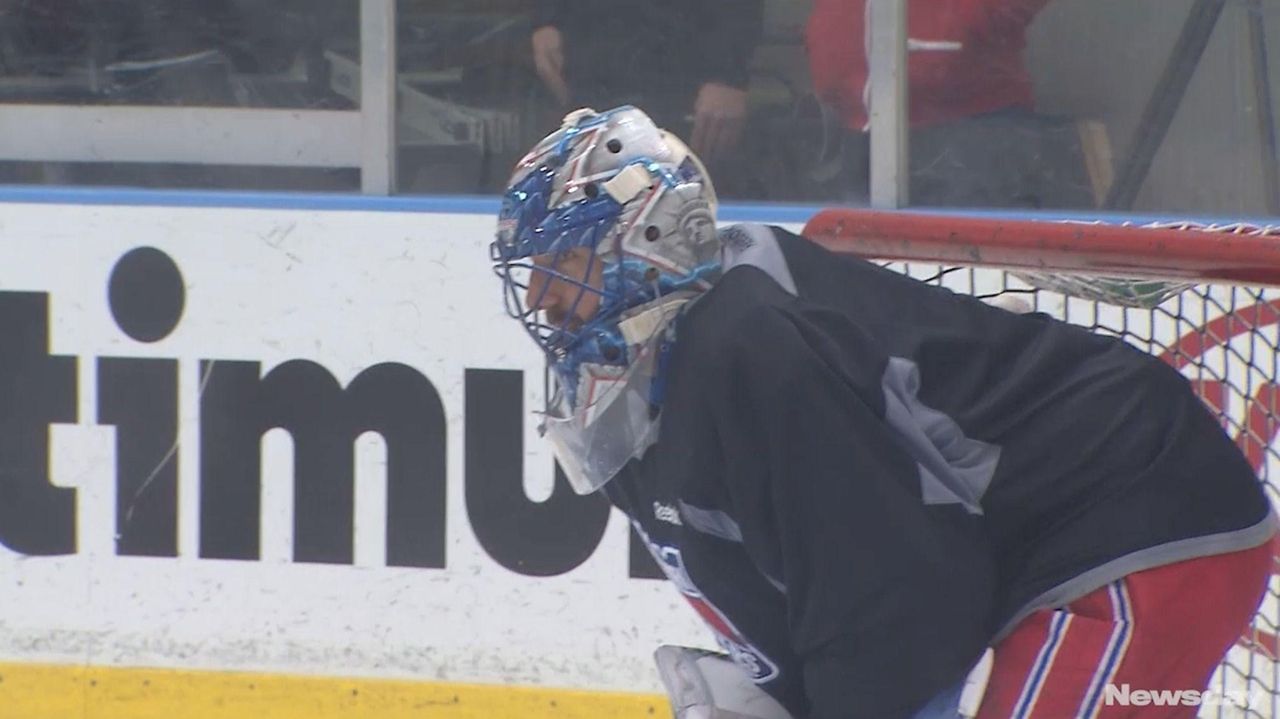 The Rangers were back on the ice on April 25, 2017 following two days off after beating the Montreal Canadiens in the first round.  New York will play the Ottawa Senators in the second round of the playoffs starting on Thursday. Credit: News 12 Long Island; Patrick McCarthy

GREENBURGH, N.Y. — The Rangers have built a reputation these last half a dozen springs of being able to grind out playoff games against any and all comers.

This next series will be a stern test of that ability. The Senators bring in plenty of skill, led by their otherworldly captain Erik Karlsson, but coach Guy Boucher has installed a forecheck and neutral-zone structure that is reminiscent of the Devils in their heyday.

“We know their style, they kind of like to slow the game down, force you to turn the puck over, make a mistake and feed their transition game,” Jimmy Vesey said on Tuesday as the Rangers prepared for Game 1 in Ottawa Thursday night. “We need to get pucks in behind their D, go to work down there. We saw their series against Boston, a lot of one-goal games and that’s how they like to play.”

The Senators edged past an undermanned Bruins team in six games, four of which went to overtime. Karlsson had six assists while averaging over 30 minutes per game — and the Norris Trophy finalist revealed after the series ended that he’d been playing with two hairline fractures in his left heel, in case he wasn’t doing enough — and Ottawa had big first rounds from Bobby Ryan and old Ranger friend Derick Brassard, who is among the league leaders with eight points.

So Alain Vigneault acknowledged that the Senators like to keep things tight defensively but isn’t interested in hearing that Ottawa plays stingy defense because it’s lacking on offense.

“They’re a team like most teams, they have a way they like to play when they don’t have the puck. Theirs is really nothing we haven’t seen,” he said. “They play it well. But their skill level, their transition — I watched the series against Boston — they’ve got skill, they’ve got transition, they’ve got speed. They’re coming at you. It’s going to be a lot of fun.”

Vigneault said he thought that the Senators could have contended for the East’s best record without some of their issues throughout the year — ones that have made Ottawa truly a feel-good story among the final eight teams.

Craig Anderson made only 40 regular-season starts and missed several stretches of the season to be with his wife Nicholle, who was diagnosed with breast cancer during the year. Clarke MacArthur made a dramatic return late in the season after missing nearly all of 2015-16 and this season with concussion effects; MacArthur scored the series-clinching goal for the Sens on Sunday.

Karlsson broke through the upper body/lower body/undisclosed injury reporting that abounds in the NHL when he told reporters of his specific injury on Sunday, but he said he did so because the fractures won’t affect him going forward.

Considering how well he played with the heel injury, that doesn’t seem like good news for the Rangers. Asked to compare Karlsson to Ryan McDonagh, his own captain, Vigneault couldn’t make a false comparison.

“I love our captain, but theirs, he’s in a league of his own,” Vigneault said. “The plays he can make, the way he sees the ice, there’s no doubt we’re going to need a real special plan for him. His offensive skill set, there isn’t anyone in the league that has that.”

Boucher had lots of kind words for the Rangers on Tuesday as well. “You look at their four lines, (Michael) Grabner has 40 points on their fourth line. There is no fourth line anymore,” he said. “Your matchups matter but not as much as they used to. All four lines look pretty similar . . . There’s no real flaws in their game, no real weaknesses. Everything is really good. They don’t have any injuries really. This is going to be an even bigger test.”

Notes & Quotes: Rick Nash did not practice on Tuesday, with Vigneault giving the veteran an extra day off. Vigneault said: “As you saw during the last series, he was real physical, so an extra day off for an old man like Rick can’t hurt.”