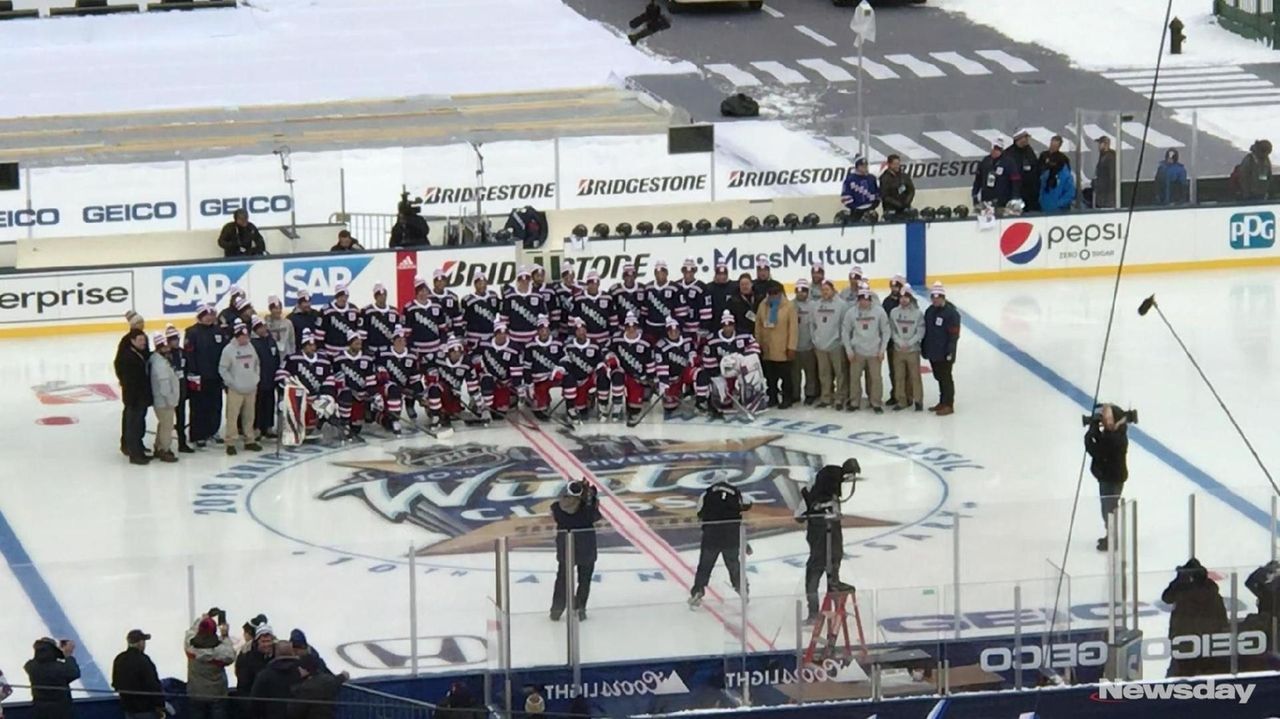 The Rangers and Sabres practiced outdoors on the Citi Field ice on Sunday, Dec. 31, 2017, and discussed how pumped up they all are to be participating in Monday's Winter Classic outdoor game at Citi Field. Credit: Newsday / Ted Starkey

The pale sun had slid behind the clouds in Flushing Meadows by early Sunday afternoon, and it was far too brisk for baseball.

Not for an NHL practice, though.

Forwards J.T. Miller and Kevin Hayes were the only Rangers on the rink at Citi Field wearing numbers lower than the temperature: 10 and 13.

And the forecast for Monday afternoon’s Winter Classic between the Blueshirts and Buffalo Sabres promises similar readings in the teens, with 17-mph winds.

For fans planning to brave the elements for several hours, a word of advice: layers.

“I went home for Christmas and there was an article in the French paper that the 84 outdoor rinks in Hull and Gatineau were all open for Christmas,” Quebec-born Rangers coach Alain Vigneault said. “I remember in my youth going out with my friends and putting the skate blades on, but I don’t remember it being this cold. Maybe my memory is not what it used to be.”

Even a Minnesota native prepared for the chill. Rangers captain Ryan McDonagh, with traces of eye black still on his cheekbones, declared after practice: “I like how I felt; pretty warm. The wind on the face, you can’t do much about that unless you wear a ski mask, and I didn’t want to do that. Sun might help [Monday].”

McDonagh, who played in the Winter Classic in Philadelphia in 2012, two outdoor games in Yankee Stadium in 2014 and one at the University of Wisconsin, said on that surface, “the biggest thing is keeping yourself in the right position, keeping your man ahead of you. You know [play is] not going to be picture-perfect, so you have to get pucks to the net and bodies in front.”

Michael Grabner, who skated for the Islanders against the Rangers at Yankee Stadium, thought it was “a lot colder” for that game, which was played at night. “It was darker, and the lights were coming on. After a few minutes, you just kind of block it out,” he said. “Pucks are going to be bouncing, sticks are going to be stiffer. It’s a cliché, but you have to play a simpler game.”

Henrik Lundqvist, who is 3-0 in outdoor games, said he’s learned from those experiences. “It helps just to know what to expect,’’ he said. “For me, there’s less distractions. There is a lot of stuff going on outside the game, so you just stay in the moment. I feel really lucky to get this opportunity again.”

Lundqvist is well aware that the Rangers, who are hanging on to a wild-card spot, need victories, inside or outside. “We have to be on top of our game, no question about it,” he said. “Points don’t come easy for us; we have to play aggressive to win this game.”

Notes & quotes: Chris Kreider, being treated for a blood clot in his right arm that was discovered during Wednesday’s game, remains out indefinitely but likely will be at Citi Field on Monday. “I saw Chris [Saturday],” Vigneault said. “He came down to the rink [in Westchester]. It’s going to take the time that it takes for that type of injury to heal. He was in good spirits and probably will come here tomorrow to see his teammates.” Kreider, who has 22 points in 37 games, was rushed to the Hospital for Special Surgery for tests after his arm swelled . . . The lineup from the 3-2 shootout loss in Detroit on Friday will dress, meaning defenseman Steven Kampfer is a healthy scratch . . . Jesper Fast, recovering from a quadriceps strain suffered against the Devils on Dec. 21, practiced Sunday but will miss his fourth game.