Preparations for the 2018 NHL Winter Classic at Citi Field in Flushing on Dec. 30, 2017. Credit: Corey Sipkin

NBC’s ranks are loaded with hockey mavens, including executive producer Sam Flood, who played at Williams College. So the success of the Winter Classic over the past decade has been more than a business success; it has become a personal favorite, also.

“It’s fun to see it evolve,” Flood said on a conference call to promote Monday’s game at Citi Field between the Rangers and the Sabres — the first Classic to be held in New York. “It was fun that first goal being scored (in 2008) and us taking the first replay from an airplane.

“Someone in the truck said, ‘Well, you can’t see the puck go in the net.’ I said, ‘First time ever you’ve had a replay from an airplane in a hockey game.’ So a series of firsts that made it fun, made it exciting, and the perfect end to that first game with a shootout goal by the young new star of the game in Sidney Crosby.”

That first game in Orchard Park, N.Y., is best remembered for the light snow that made for a mesmerizing television effect and illustrated the charm of the idea. 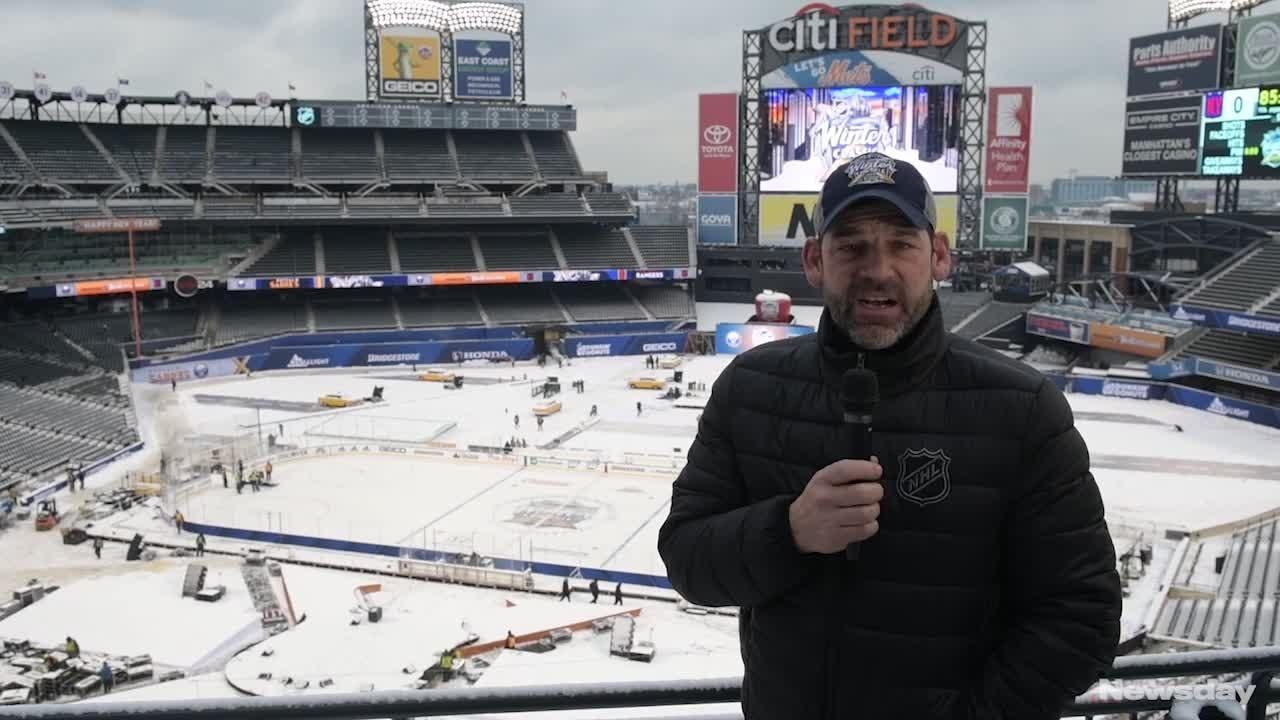 Since then there have been other snowy days, but also rainy and overly warm ones. Too warm is not going to be an issue on Monday, when temperatures are expected to be in the teens in Queens.

“My favorite three out of the eight that I’ve done were Ralph Wilson Stadium, Fenway Park and Michigan Stadium,” play-by-play man Doc Emrick said. “They’re in some cases different reasons, but the common reasons for my favorite three being those were each had snow at some time or all day, each was cold, and each went to overtime or had a shootout.”

NBC analyst Mike Milbury said, “I feel somewhat cheated that this thing started only 10 years ago. It would have had to start close to half a century ago if I could have played in one. But it’s great to see the players so engaged and take it so seriously and at the same time incorporate that essence of joy of playing the game.

“And as somebody who really grew up playing outside (in Massachusetts), it’s hard for me to describe the excitement you feel on a pond, on a river, and now even more so, on a homemade rink in the middle of a stadium that will seat 50,000 or 60,000, however many thousands of people. There’s just a new level of adrenaline that they’ll hit.”

Said analyst/reporter Pierre McGuire, “They never get old, these games. They’re not always perfect because sometimes the ice conditions break down due to the weather, but I think that’s part of what makes it so special.

“Because of the weather elements, it’s not the perfect fast track conditions every single night that you would get in the NHL, but you still have to play an NHL game.”