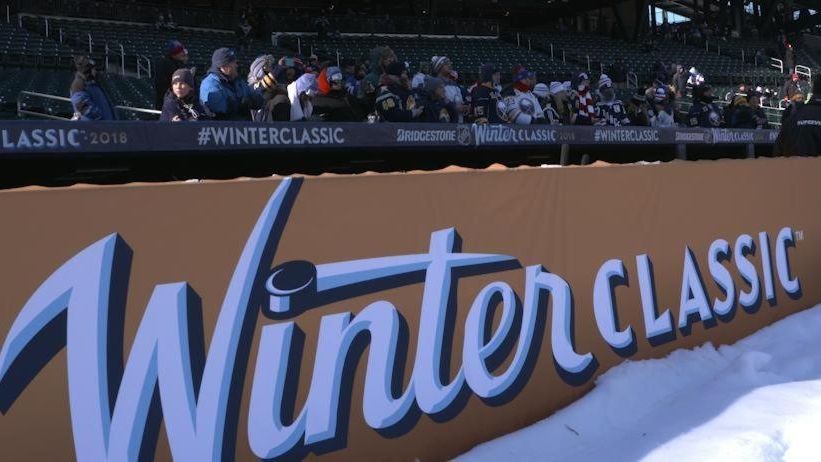 After the Rangers surrendered an early two-goal lead in the steady wind and changing daylight at Citi Field, the Winter Classic hung in the balance.

Opportunity — or a tough-luck loss in the cold — was going to be the outcome in a nail-biting overtime against the Buffalo Sabres.

“You don’t play that many nights outside, so every game means a lot to you. You want to make the most of it,” goaltender Henrik Lundqvist said. “It’s Game [39] for us, but when you’re playing this game, this is it, that’s the only one, and you want to make sure you get the two points. You want to make sure that you’ll be able to sit down in a week, or this summer, that you’re going to look back and that this is a great memory.”

Kevin Shattenkirk, the New Rochelle native in his first season as a Ranger, and J.T. Miller, in his first outdoor game, combined for the game-winner at 2:43 of overtime as the Rangers edged the Sabres, 3-2, on Monday in the NHL’s 10th Winter Classic before 41,821 partying, partially frozen fans in Flushing.

With former Devil Jacob Josefson in the penalty box for tripping, the Rangers’ four-on-three power play was the difference-maker.

“The play was open. It was one where he was standing wide open at the net front and I just knew I had to get a puck in to him,” Shattenkirk said. “He got a nice tip on it and his ability to stay with it and have the presence of mind to find that rebound was a great play . . . It’s crazy, you realize that you won the game, and when you realize the stage, you hear that delayed roar, but when it hits you, it’s amazing.”

Miller’s eighth goal beat Robin Lehner, who faced 42 shots, and ended a game that initially looked as if it might be an easy ride for the Rangers but turned into a game of inches.

Just before Josefson’s overtime penalty, the Sabres had a two-on-one break. The pass grazed Ryan McDonagh’s stick and went through Jack Eichel’s skates.

“Today was just one of those tough bounces,” Sabres coach Phil Housley said.

With the Sabres trailing 2-1, Buffalo defenseman Rasmus Ristolainen zipped a shot from the right point past Lundqvist’s glove 27 seconds into the third period as the Sabres rebounded from a 2-0 first-period deficit.

The Rangers had grabbed the lead on goals by Paul Carey at 4:09 and Michael Grabner at 8:20. Carey’s was set up by Jesper Fast, who made an unexpected return from a quadriceps strain. Grabner’s 18th goal came off a feed by Kevin Hayes.

With Nick Holden in the penalty box, Sam Reinhart scored on a power play at 56 seconds of the second period to halve the margin.

The goal seemed to spark the Sabres, who killed Zach Bogosian’s second penalty and came close to tying the score. With Miller serving a bench minor for too many men on the ice at 8:44, Evander Kane’s deflection of Marco Scandella’s shot went off the crossbar behind Lundqvist.

In the end, the Sabres, who have struggled this season, appreciated the hoopla, the spectacle and the point gained. “It was a great game,” Housley said. “It’s unfortunate somebody had to lose.”

The Rangers have playoff dreams and greater expectations, but any outdoor game remains special.

Said Lundqvist, who made 31 saves: “I could easily play one every year.”

Miller excited to score OT goal on big stageSure, it was a career highlight for J.T. Miller, but there was only so much ... Fans relish opportunity to attend Winter ClassicIt took the NHL Winter Classic 10 years to make it to New York City, ... Henrik Lundqvist 4-0 in outdoor gamesWith his 31-save performance in shadows and sun at Citi Field, Henrik Lundqvist went 4-0 ... Herrmann: NHL puts on Classic show at Citi FieldHats off to hockey. We don't mean that literally because no one wanted to see ...