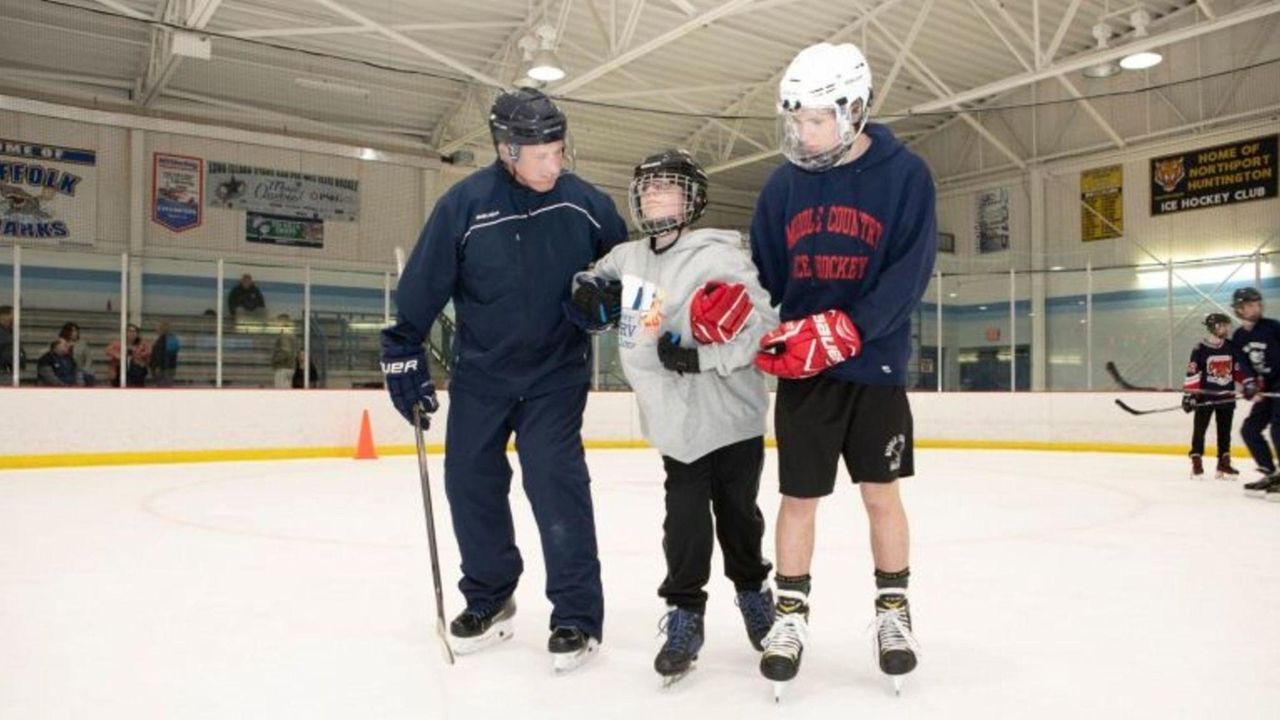 More than a dozen residents from New York City, Westchester and Long Island took part in a free hockey clinic for the visually impaired and blind Sunday. NY Metro Blind Hockey is a league led by Ted Caputo, a sergeant with the Suffolk County Police Department. Also in attendance was former Boston Bruins winger Willie O'Ree, the first African-American NHL player, who was blind in his right eye. Credit: Jessica Rotkiewicz

Willie O’Ree was in the recovery room after the operation at the hospital in Guelph, Ontario. It was 1955, and a slap shot had deflected off a stick, hitting him in the right eye during a junior hockey game. Now the surgeon was delivering a check to the Kitchener player’s soul.

“Mr. O’Ree, the impact of the puck completely shattered the retina in your right eye,” he said. “You’re going to be blind and you’ll never play hockey again.”

O’Ree, 19, slumped back in his bed. But the Canadian kid decided to prove the doctor wrong and returned to play about four weeks later.

After adapting to the vision loss, he finished with 30 goals and turned pro. He played 21 seasons, mostly in the minors, without ever telling his teams he was blind in one eye.

But O’Ree’s historical significance runs much deeper. He is known as “The Jackie Robinson of Hockey” after becoming the NHL’s first black player, debuting with the Bruins on Jan. 18, 1958, at age 22.

Now he’s 82, living in California and doing what he has done for about two decades. O’Ree works for the NHL as its diversity ambassador, traveling around North America to do clinics and speak to boys and girls about getting into hockey and setting goals. He’s a walking, talking advertisement for overcoming obstacles.

“Besides being black and besides being blind, I was faced with four other things — racism, prejudice, bigotry and ignorance,” O’Ree said Sunday at Dix Hills Park Ice Rink before speaking to blind and visually impaired kids and adults participating in a New York Metro Blind Hockey program event.

Much of his career was spent in the Western Hockey League. The wing from Fredericton, New Brunswick, won two goal-scoring titles. His NHL days included two games for the Bruins in 1957-58 and 43 in 1960-61.

“Every game I went on the ice, there were racial remarks and slurs from not only players on the opposition but fans in the stands,” O’Ree said. “I just told myself, ‘Just concentrate on playing hockey, Willie, and let everything else go by the wayside.’ I can honestly say I never fought one time because of racial remarks.”

Fans in Chicago were especially rough on him. In February, 60 years after O’Ree’s debut, fans in Chicago hurled racial taunts at Washington’s Devante Smith-Pelly.

“I just say we haven’t really come that far,” O’Ree said in reaction. “There’s still racism in the league. There’s racism in the junior leagues, the midgets and the smaller leagues. I guess we’ll just have to keep working at it.”

Smithtown’s Ted Caputo, a sergeant with the Suffolk County Police and the president of New York Metro Blind Hockey, called O’Ree “the perfect fit” for this event.

“It takes a lot of courage to go into the NHL, the biggest league in the world, with losing one eye of vision,” Caputo’s 14-year-old son Timothy, a visually impaired player, said after listening to O’Ree’s talk. “I thought it was incredibly inspiring.”

“The Jackie Robinson of Hockey” met Jackie Robinson twice, first as a 14-year-old at Ebbets Field after coming to New York with his baseball team. O’Ree told Robinson he also played hockey. “He just said, ‘Whatever sport you choose, just work hard at it and just be all that you can be,’ ” O’Ree said.

Blind hockey players attend clinic on LIMore than a dozen residents from New York City, Westchester and Long Island took part in a free hockey clinic for the visually impaired and blind.