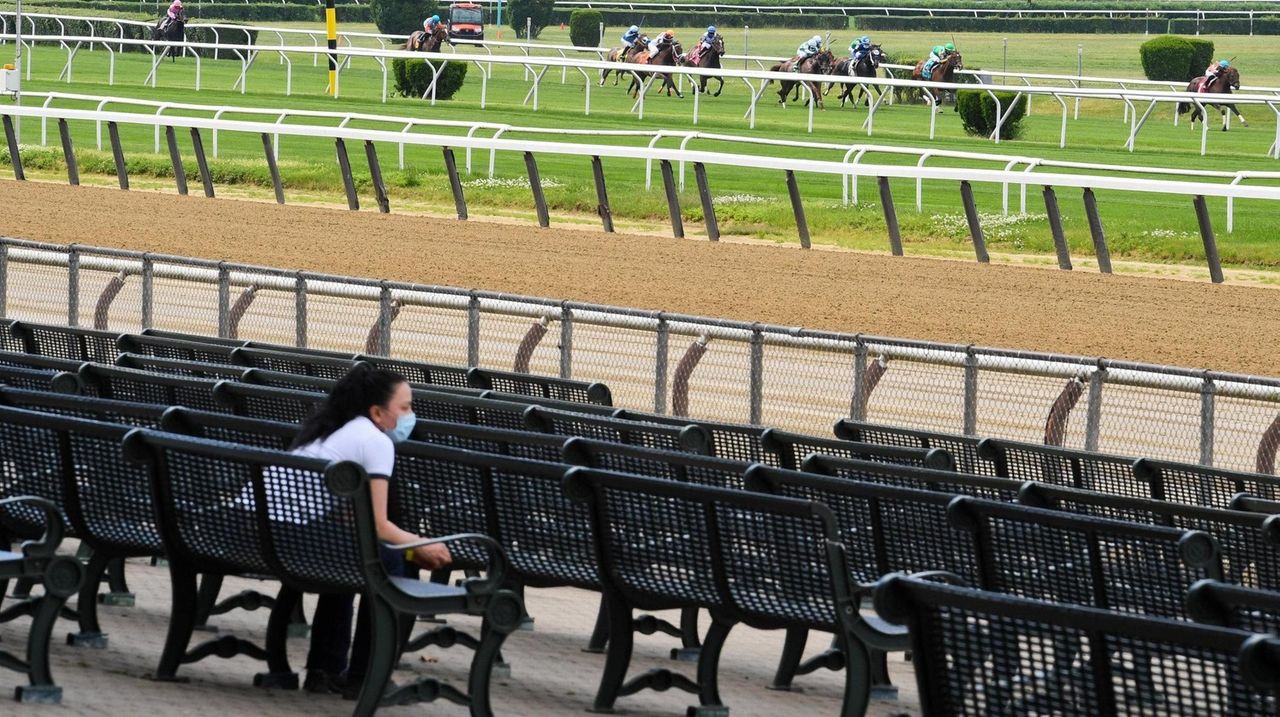 Trainer Eddier Barker discusses his experience with training and racing during COVID-19 in an empty clubhouse during the first day of racing at Belmont Park, Wednesday, June 3, 2020. Credit: Newsday / Steve Pfost

The gates swung open at 1:21 p.m., six minutes past the scheduled post time, and, 1:17.09 and six and a half furlongs later, Star of the West with Reylu Gutierrez aboard crossed the finish line first by five and a half lengths.

“We can finally say they are off and running at New York’s Belmont Park,” track announcer John Imbriale bellowed as the horses took off.

And, with that, professional sports had returned to New York after more than 11 weeks of inactivity because of the COVID-19 pandemic.

“It was very emotional,” said Guiterrez, who grew up in Rochester working for his father, Luis, a trainer at Finger Lakes Racetrack and who stayed in New York during the pause. “Some riders are from out of town but, primarily, the guys that are here right now are New York riders. It was very emotional to come in here.”

Profitable, too. The all-sources handle of $10,972,254 broke the previous opening day record, set in 2010, of $10.7 million even though there was no betting on site nor in the casinos, which are closed.

No fans or owners were in the giant grandstand and everybody who entered the 550-acre grounds was subject to a temperature screening. The sparse media crowd was confined to, and well spread out in, the press box rather than being allowed access to the paddock or stables. Interviews were conducted via speaker phone.

The NYRA has outlined strict health protocols but not everything ran to perfection on Day 1.

Hall of Fame Jockey Javier Castellano, who asymptomatically tested positive for coronavirus in Florida in late March and has subsequently tested negative four times, questioned some of the procedures in the tight jockeys’ room.

“I don’t blame nobody for the situation,” said Castellano after riding Rushing Fall to a two-length win in the $100,000 Grade 3 Beaugay Stakes, the day’s ninth race. “We have four valets that didn’t have the [test] results and they were here. What happens if one guy comes out positive?”

There was a moment of silence prior to the first race and then the jockeys took a knee in the paddock area as a sign of respect for those protesting for racial equality in the wake of a black man, George Floyd, dying while being forcibly held down by a white Minneapolis police officer, Derek Chauvin, on May 25.

“There’s a lot going on in the world right now,” Gutierrez said. “It’s important to show respect to all causes and to all people. Horse racing is a worldwide sport. It doesn’t matter what color you are, what religion you are, what ethnicity you are. We see people from everywhere. Fans from everywhere.”

But Gutierrez said he did not notice the stands being empty of fans.

“It was like a normal race,” Gutierrez said. “I don’t really pay attention or hear them.”

Around 1,200 people continued working at Belmont during the forced hiatus from live racing, including Gutierrez who exercised horses, and around 600 of the 800 backstretch workers live on site.

The resumption of live racing will only bring about 60 more people daily to the track.

The meet’s marquee race, the Belmont Stakes, typically the final leg in thoroughbred racing’s Triple Crown, has been pushed back two weeks to June 20, shortened to 11/8 miles from its marathon 11/2-mile distance and had its purse cut to $1 million instead of $1.5 million.

Also Wednesday, jockey Irad Ortiz Jr. rode five winners. Gaultier, in the fifth race, and Hidden Scroll in the eighth, crossed the finish line without a rider after throwing their jockeys coming out of the starting gate. And the aptly-named Fauci, a popular 6-5 pick in the third race, ran second to Prisoner by nearly five lengths. The horse is named after Dr. Anthony Fauci, the director of the National Institute of Allergy and Infectious Diseases.