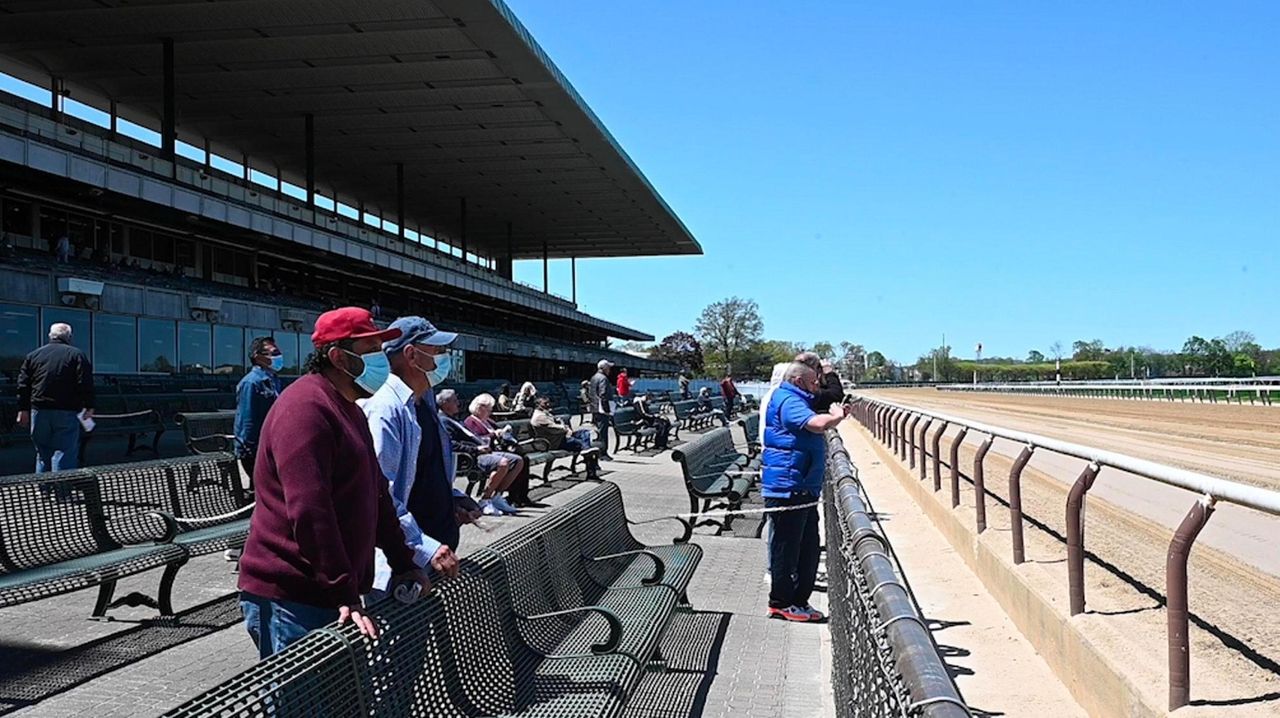 It's the first of May and fans returned to Belmont Park as it reopened to the public Saturday. Newsday's Steve Langford has more. Credit: Newsday / J. Conrad Williams Jr.

When the bugle sounded Saturday afternoon at Belmont Park, the horses were off to the races.

And for the first time in 552 days, fans were there to see them cross the finish line.

Belmont Park in Elmont opened its races to fans Saturday for the first time since 2019 after its 2020 season was shortened and held without fans due to the COVID-19 pandemic. Though there were few signs of the fanfare to align the opening of race day with the Kentucky Derby, some fans in big hats still took the stands to watch photo finishes.

State regulations limited capacity at sports arenas to 20%, or up to 7,000 fans at Belmont. Racing officials sold tickets in advance for about 1,000 fans for Saturday, with assigned seating, masks required and proof of full vaccination or a negative COVID-19 test. Tickets went on sale Wednesday and no walk-up tickets were available.

Derby Day at Belmont usually attracts 5,000 to 10,000 fans. With a few hundred fans in attendance early Saturday afternoon, fans could hear jockeys talking and starters yelling on the track.

Anne Marie Catalano, 64, of Massachusetts, wore her festive hat with the silhouette of a horse to watch the races Saturday. She said she was glad to return after last year's Belmont Stakes, which she had tickets for, was pushed back two weeks and closed to fans.

"We usually only get to the big races and this being Derby Day, we just assumed to be at Belmont," Catalano said. "There are very few people at the track and I feel like the queen of England, like it’s a private race just for me."

Fans haven’t watched live racing at Belmont since Oct. 27, 2019, because of the pandemic.

Last year’s Triple Crown flipped the order of races, kicking off with the Belmont Stakes on June 20 as the first race in the series once the Kentucky Derby and Preakness were postponed.

The Belmont Stakes will return to its normal schedule June 5 with fan capacity increased to 33%.

"It was incredibly unusual to run the Belmont Stakes without the energy excitement and enthusiasm that only these passionate fans can provide," spokesman Patrick McKenna said. "I think we all would have preferred to be in our traditional spot as the final jewel in the Triple Crown. After life in general was so upended by the COVID-19 pandemic, I think it’s something we hope to never repeat and this year will look nothing like the 2020 Belmont Stakes."

Racing at Belmont last year was without fans, but racing officials said it was vital to resume the season to keep the sport alive, including purse money for trainers, jockeys and staff as an economic driver for hundreds of workers.

McKenna said Saturday's races were the first step toward normalcy in resuming races at Belmont. Racing officials and community leaders said they hope to increase capacity with additional vaccinations as the infection rate drops.

"It’s a big day in the thoroughbred racing world, including here in Nassau County with the return of fans to Belmont," Nassau County Executive Laura Curran said. "Let’s keep up our incredible vaccination progress so we can further expand capacity and get back to normal."