It had been awhile – 138 years, to be exact – but a New York horse is again champion of the Belmont Stakes, the state’s greatest horse race.

And, 17 years after Funny Cide won the Kentucky Derby and the Preakness, Sackatoga Stable and trainer Barclay Tagg have another shot at a Triple Crown with Tiz the Law, who finished first in Saturday’s 152nd running of the $1 million Belmont Stakes by 3 3/4 lengths. He ran the 1 1/8 miles in 1:46.53 in the first major sporting event in New York since the COVID-19 pandemic effectively shut down the sports world in March.

“It’s tremendous,” said Jack Knowlton, the operating manager of Sackatoga Stable and one of 34 co-owners who pooled $110,000 to buy Tiz the Law. “We buy New York breds. That’s our game, and we don’t spend a lot of money.”

This Belmont Stakes, originally set for June 6, was the first leg of the Triple Crown instead of its usual spot as the last leg. It was shortened from its usual marathon 1 1/2-mile full lap around Belmont’s main track to account for the coronavirus-caused upheaval in the horse racing calendar and training schedules. 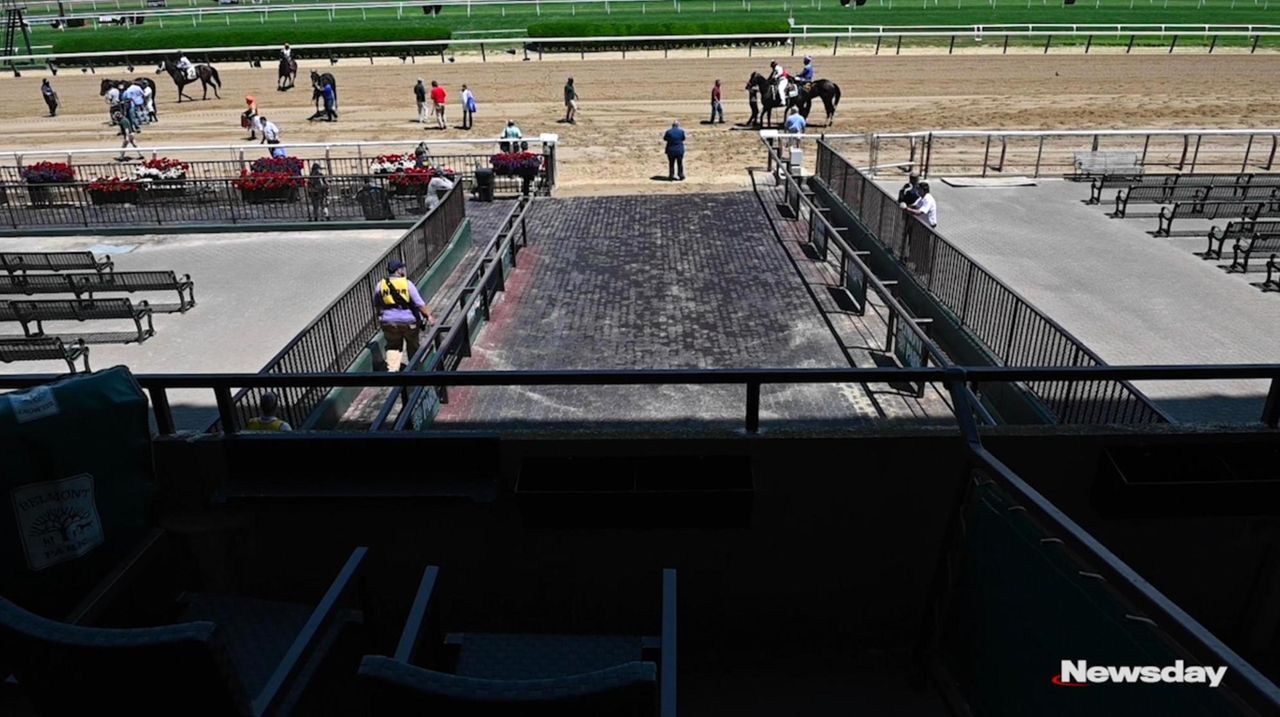 Belmont Stakes returns for 2020 with no fans The Belmont Stakes is back, but this year without any fans due to COVID-19. Newsday's Andrew Gross shows us what this year's race looks like from the empty stands.  Credit: Newsday / Steve Pfost

The Kentucky Derby is now next on Sept. 5 and the Preakness, usually the Triple Crown’s middle leg, will be on Oct. 3

Saturday’s 12-race Belmont Stakes Day card was contested without fans or owners in the cavernous grandstand stands, essentially empty save for track employees and limited media.

“Actually, it was very nice, I can’t complain about that,” Tagg said of the altered atmosphere at Belmont Park. “I’m not trying to be a jerk about it. But I thought the quiet was very nice.”

After New York Gov. Andrew M. Cuomo, via a video feed, gave the jockeys in the paddock the “Rider’s up,” command and the traditional taped version of Frank Sinatra’s “New York, New York” welcomed the horses onto the track for the post parade, the race developed almost as if Tagg had written the script.

Tiz the Law, the heavy favorite at 4-5, broke from the eighth post and followed third behind the early speed of the Mark Casse-trained Tap It to Win, who wound up fifth, and the Doug O’Neill-trained Fore Left, who eventually faded to ninth.

Jockey Manny Franco then had Tiz the Law move into the lead as the horses reached the lone turn after the long, straight run on the backside. Turning for home, it was just a matter of Tiz the Law widening his lead.

“I was pretty confident by the time we hit the seven-eighths pole,” Franco said. “He was so kind and relaxed for me. He was so comfortable and never got keen.”

“He ran great, no excuse,” Dr Post jockey Irad Ortiz Jr. said. “He got beat by a good horse, too. The winner is a nice horse, New York-bred and he ran great.”

This continues Tiz the Law’s winning streak after he won the Grade 1, 1 1/8-mile Florida Derby on March 28 and the Grade 3 1 1/16-mile Holy Bull at Gulfstream on Feb.1. Tagg kept Tiz the Law training at Belmont during the long, forced layoff since his last race.

“It looked to me like everything just went like clockwork,” said Tagg, who won his first Belmont Stakes. “That’s the way the horse likes to run and that’s the position the horse likes to be in. Manny knows the horse very well. We discussed it quickly before I put him up on the horse and I felt very confident Manny would ride him that way.”

“I didn’t want to be too far off with the way the track is playing right now,” Franco added. “I knew that [Tap It to Win] was the one we wanted to beat so I didn’t want to let him go too easy. I was in the position that I wanted.”

Tiz the Law is the fourth New York bred horse to win the Belmont Stakes. Forester, in 1882, was the last.

Photos: 2020 Belmont StakesScenes from the 2020 Belmont Stakes on Saturday, June 20, 2020 at Belmont Park in ... NBC focuses on New York for Belmont Stakes narrative"It's one of the great New York sports days, and man, does New York deserve one," said host Mike Tirico. Gross: Wonderful race, but Belmont comes with an asteriskIt was great just having the first major sporting event in New York since the shutdown because of COVID-19.

Igor makes 40 saves, Panarin scores in OT as Rangers top Leafs
Barrett improved his defense, and Knicks will need it
For Tom Thibodeau the coach, 'everything matters to me'
Martin's return can't come soon enough for struggling Isles
Williams upset at booing but Judge, Solder see it as a challenge
Giants sign former Pro Bowl LB McKinney
Didn’t find what you were looking for?