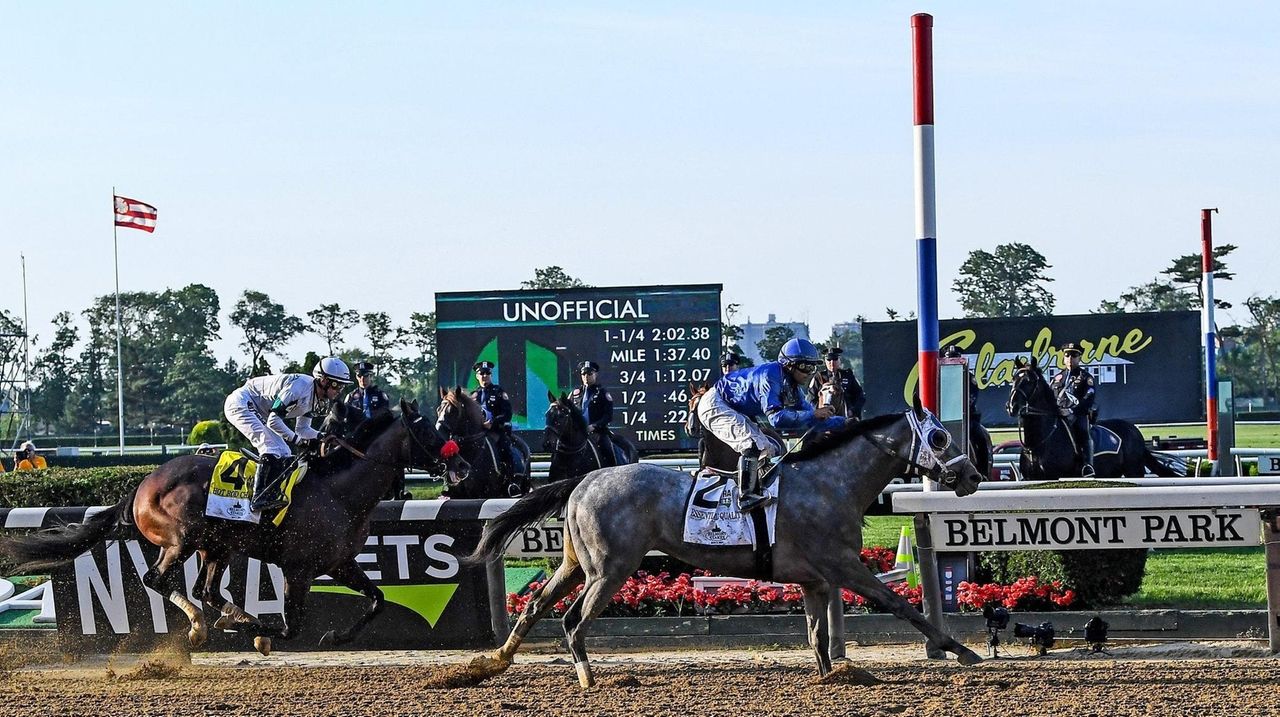 For a sporting event that lasts just a couple of minutes, there's a lot of lead time the day of the Belmont Stakes. Fans were back for the Triple Crown race at Belmont Park Saturday, with vibrant hats and fashion. Newsday's Steve Langford has more. Credit: Newsday / Reece T. Williams

With flowered hats, flowing dresses and vibrant tuxedos, fans returned Saturday to Belmont Park for the track’s biggest day of races and the final leg of the Triple Crown.

The atmosphere was festive and normalcy was in the air: a jazz band played, a barbershop quartet sang, and fans cheered the day’s earlier races, win or lose.

Luis Morales, 31, of Brentwood, was among those on hand. He wore a blue suit jacket and a red ascot to return to the track for the first time in years.

"It’s invigorating and feels just a little bit normal. We jumped at the opportunity to be bougie and rub elbows with Long Island’s finest," he said. "It still feels a little jarring to one day go from wearing a mask and then not. In a false way, I feel comfortable."

Last year’s Belmont Stakes was delayed and run without fans during the COVID-19 pandemic. Held later in June, it was the first leg of the Triple Crown. The Kentucky Derby was held in September and the Preakness was run in October.

New York Racing Association officials were expecting about 11,000 fans Saturday — advance tickets were sold out — for the 153rd running of the Stakes, which was won by Essential Quality.

Capacity during a Triple Crown race can swell to 90,000 fans, but that title wasn't on the line this year, and Kentucky Derby winner Medina Spirit failed a drug test and wasn't in the race.

Still, the day marked the return of the Stakes "to its customary spot on the racing calendar as the third leg of the Triple Crown and its famed distance of 1½ miles," NYRA spokesman Patrick McKenna said.

Anne Marie Catalano, 64, of Massachusetts, who co-owned 2020 Kentucky Derby winner Authentic, brought her family to the Stakes for the first time. She returned to the track after it opened last month on the first day of races after more than 550 days during the pandemic.

"It’s a relief and a joy to get back to something I love to do," Catalano said. "I was heartbroken I couldn’t get here, and now that more people are getting vaccinated, let the good times roll!"

Fans puffed cigars and knocked back drinks in scenes reminiscent of the Roaring '20s. For many of them, the race is a worldwide draw.

Milton Brooks 55, of Dallas, looked over the day’s lineup of races. He was on hand when American Pharoah won the Triple Crown in 2015.

"It’s awesome to see this day come. Some days I never thought it was going to happen. I thought things would never be the same," he said.

Sherry Gould and her daughter Melyssa Price braved the traffic, arriving from Littleton, Massachusetts. They were donning elaborate hats, which Gould dubbed a "second mortgage."

"It’s definitely one of those iconic moments," Harris said. "It’s different with less people around and a more comfortable experience. … It’s almost back to normal — and we’re still losing money," he joked.

Fans also flocked to a cult favorite celebrity — NBC political data analyst Steve Kornacki, who was breaking down the race for NBC Sports and posing for pictures with fans in his famous khakis.

No walk-up tickets were sold on race day, and organizers created fully vaccinated sections. Masks were optional for vaccinated fans and required for unvaccinated attendance.

Outside the track earlier in the day, about two dozen horse-racing protesters picketed against animal cruelty and held signs saying "horse racing kills." A digital message board also was driven past the track saying, "End Horse Racing."

The track also included a mobile COVID-19 vaccination site set up by state officials, offering tickets to next year’s race.