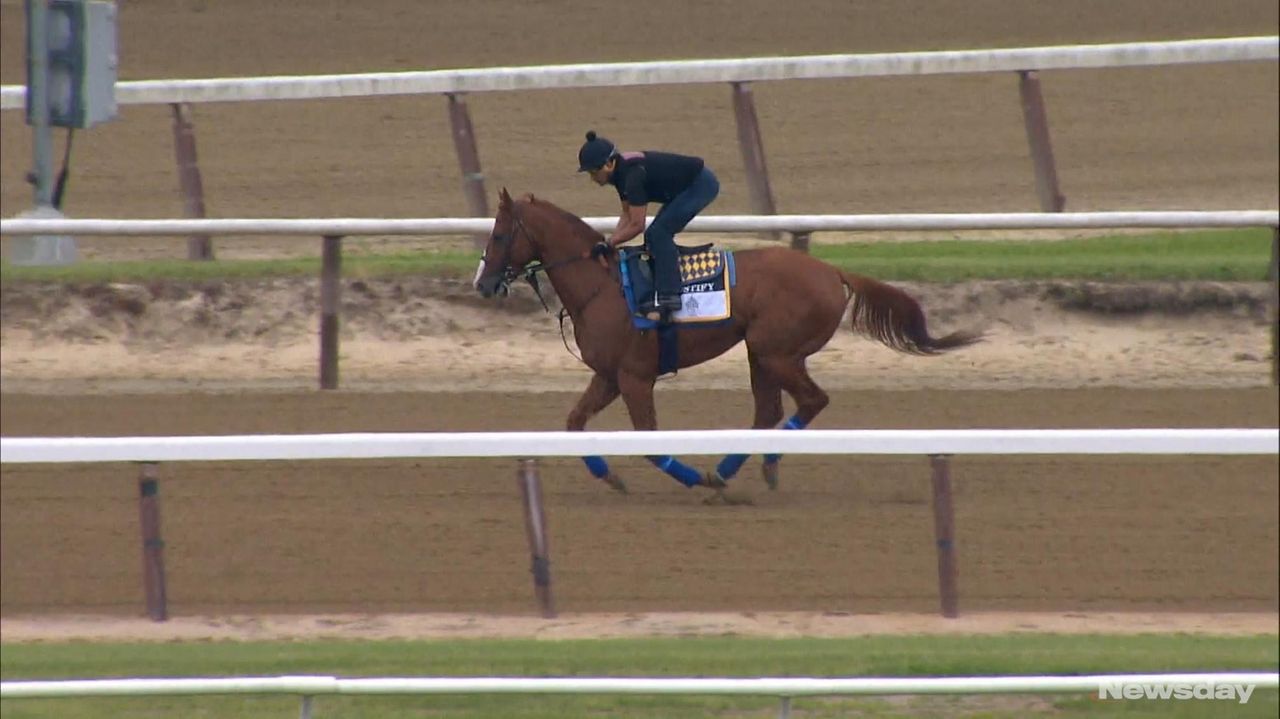 Triple Crown hopeful  Justify worked out for the first time at Belmont Park on Thursday, June 7, 2018, two days prior to the Belmont Stakes. Credit: NYRA

Can a small bettor make a score with a heavy favorite in the Belmont Stakes? Yes. Difficult, but far from impossible.

It’s been done many times. The chalk wins, your longshot clunks up for second, and you feel so smart. I hit a $73.20 Belmont exacta in 1992 with even-money winner A.P. Indy and 18-1 shot My Memoirs. Had it twice, what a rush. The distant memory still warms my heart.

Unless you’re betting hundreds, playing undefeated Justify to win at odds of 4-5 or less isn’t an attractive proposition. He’s seeking an unprecedented achievement — sweeping the Triple Crown in his sixth race after making his career debut Feb. 18. From a risk-reward standpoint, taking an odds-on horse to do something that’s never been done is about as silly as it gets.

Yet is it possible to gamble intelligently? An estimated 95 percent of horseplayers lose in the long run. Ah, so what, it’s a fascinating if often maddening hobby. The Belmont is always a pari-mutuel journey into the unknown, because 3-year-olds are being asked to go a grueling 1½ miles on dirt for the first and almost certainly the last time.

I won’t be betting Justify to win, but I’m not keen on any of his nine rivals. Hofburg, the second favorite, has been training brilliantly, but his 9-2 morning-line odds don’t seem generous enough. Hofburg has a great distance pedigree and a terrific trainer in Bill Mott. Unfortunately, he’s the “wise guy horse” that many “experts” have anointed as their upset special. Problem: Wise guy horses hardly ever win.

I don’t think Bravazo will improve off his second in the Preakness. I think Tenfold, third at Pimlico, and Vino Rosso could move forward. I don’t like any of the others.

Belmont Park’s main track has a circumference of 1½ miles, making “The Test of the Champion” one seemingly endless lap. Although post position rarely is significant in the Belmont, a bad start in a marathon can be just as harmful as in a sprint. Trainer Bob Baffert’s main concern for Justify is making a quick getaway, as he did in the Derby and Preakness.

“Really, the biggest part of the race is breaking cleanly from the gate,” Baffert said. “You can have a great post, but if you don’t leave there, you’re still going to be in trouble. With American Pharoah, he broke about one length slower than the field. It could’ve been a bad situation, but Victor (Espinoza) got him into good position early.

“After the break, you just have to see how the race plays out.”

The 150th Belmont could play out as a paceless race, because besides Noble Indy, there’s no speed to challenge Justify. Even if Noble Indy goes hard from the start, Justify can rate off him. Justify’s high cruising speed gives him a significant edge in a race that historically favors horses on or near the pace.

“I feel like it would be a really big mistake to feel that Justify isn’t on his game,” Lukas said. “I think he’s really on his game.’’

So, how do I approach a race in which I strongly favor the favorite but hate his price? I could show monkish self-discipline and not bet, but I’m not that smart.

I’ll play Justify in $10 exactas over Hofburg, Tenfold and Vino Rosso, and $2 exactas with each over Justify, just in case he’s not himself. I’ll also put $10 to win on 12-1 Tenfold.