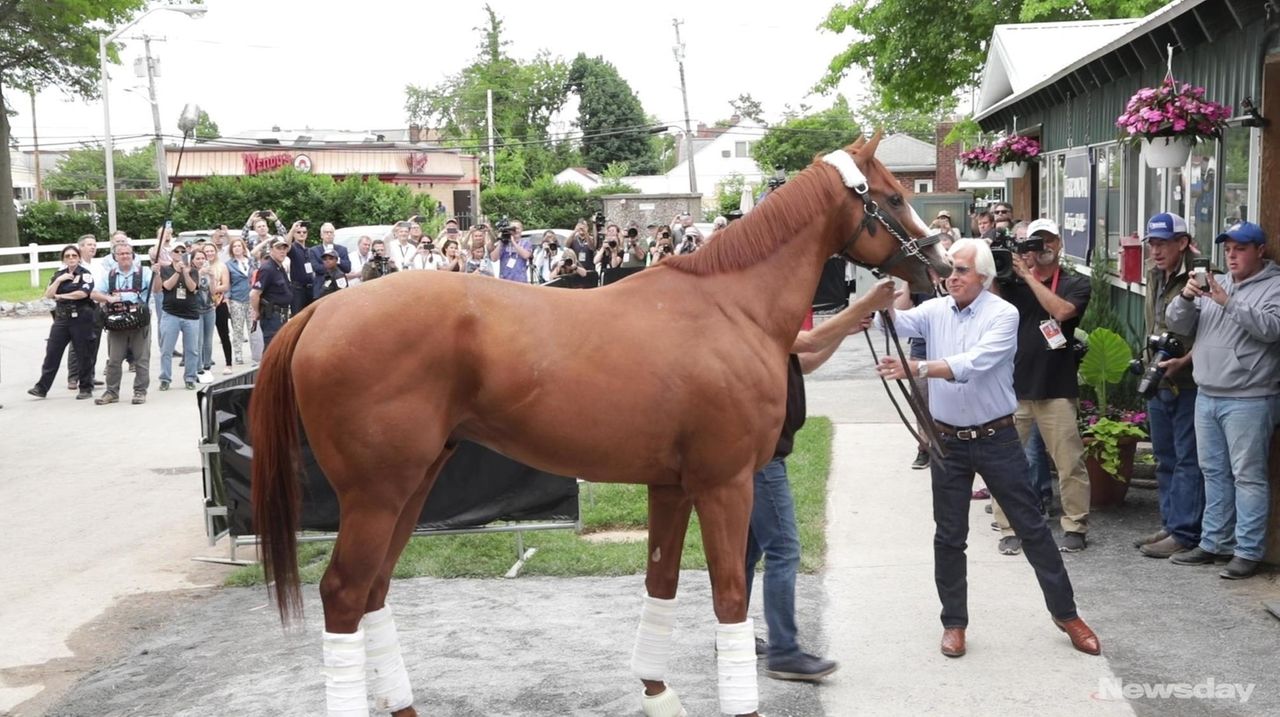 On Wednesday, Justify arrived Wednesday at Belmont Park in preparation for the Belmont Stakes on Saturday June 9, 2018.  Bob Baffert, trainer of Justify, said he hasn't done anything different than he did three years ago with American Pharoah. Credit: Newsday / Yeong-Ung Yang; NYRA

Long before Airbnb got started in 2008, trainer John Terranova and his wife, Tonja, were providing faraway accommodations for Bob Baffert’s horses. For the past 23 years, the Syosset residents have been taking care of the Southern California-based trainer’s shippers to Aqueduct, Saratoga and Belmont Park.

Three years ago, the Terranovas hosted Baffert’s colt American Pharoah in Elmont before he earned the first Triple Crown since Affirmed in 1978. Now their world-famous guest is the undefeated Justify, who late Saturday afternoon will attempt to become the 13th 3-year-old thoroughbred to win all three races. He’s the 4-5 morning-line favorite in a field of 10.

The imposing chestnut colt arrived Wednesday at 2:13 p.m. at Belmont after a 5 1/2-hour journey. He and stablemate Restoring Hope, another Belmont Stakes runner, left Baffert’s Barn 33 at Churchill Downs at 8:31 a.m. on a van bound for Louisville International Airport, 2½ miles away. Their Tex Sutton equine charter took off at 10:39 a.m. and landed at Islip’s MacArthur Airport at 12:25 p.m.

Another van took the horses and Jimmy Barnes, Baffert’s longtime assistant trainer, on the 40-mile ride to the Terranovas’ Barn 1, about 50 yards from Hempstead Turnpike. The trip from MacArthur, mainly along the LIE, took a little more than an hour.

Baffert, then Barnes walked Justify around the inside of the barn for about 20 minutes, touching off a chorus of whinnying. “All the other horses were screaming their heads off,” Baffert said. “It’s like they were greeting him. He must have some kind of effect on them.” As Justify was given a three-minute bath, dozens of cameras whirred, sounding like a swarm of locusts.

Justify will be bedded down in Stall 30, the same place where American Pharoah spent the second half of Belmont week in 2015.

“This is business as usual for us,” John Terranova said. “We’ve been friends with Bob for a long time, and we look forward to being around some rare thoroughbreds. We’re all ready for Justify. Hopefully, everything will go smoothly and we’ll have a lot of fun and enjoy the show.”

John, 47, was born and raised in Syosset. In 1991, after moving to California to train there, he met Baffert through Tonja, 48. She grew up in the Golden State and “fell in love with the racetrack” at 15, starting as a groom. She knew Baffert when she was “17 or 18” back in the mid-1980s. He was still training quarter horses then and wouldn’t get his first win in a Triple Crown event until the 1997 Derby with Silver Charm.

Baffert was asked if this campaign feels different than American Pharoah’s.

“Three years ago, we came in here to see if we could get it done,” he said. “This time around, it’s a different vibe because we know it can be done.

“This horse started his journey just four months ago, and he’s brought us along on his coattails. I’d like to see the horse win it for himself.”

Belmont Stakes winnersResults from every year of Triple Crown's final leg. A Belmont Stakes Q&A for fans and neighsayersIn honor of the 150th running of the Belmont Stakes, here's a complete guide to race day logistics, the history of the event and more.