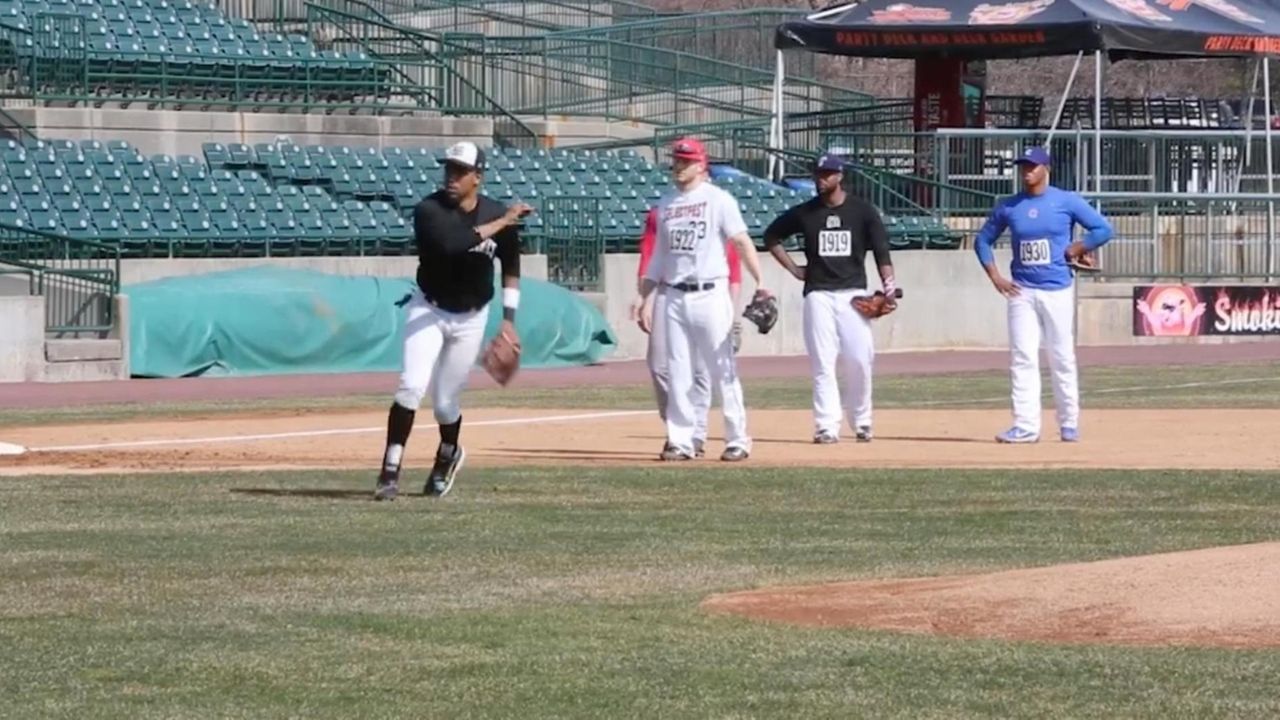 When the 63 hopefuls took the field Saturday morning at Bethpage Ballpark for the Long Island Ducks’ public tryout, several players made their presence felt immediately.

One for his 96-mph fastball. Another for his slick fielding and versatility. A couple for depositing batting-practice fastballs over the fence.

Then there was Larry Goodman.

The East Northport resident was decked out in orange and blue, the colors of his beloved Mets. He played second base during drills, shagged fly balls during batting practice and took some hacks, sending a few balls into the outfield.

“It’s being a kid again, having fun,” he said. “The challenge of catching a ball. As you get older, it gets a little tougher.”

Goodman said he learned he had cancer about a year ago after doctors found a small spot on his lung. Recent tests indicate that he’s in the clear, he said, but the health scare prompted him to take another shot at his dream.

“I said, ‘If not now, when?’ ” said Goodman, who recently attended a Mets fantasy camp with Ducks manager and former Met Kevin Baez. “I’m not a kid anymore. It was a great experience.”

Goodman said he was floored by the talent around him, a pool of players that included 17 with previous professional experience in affiliated baseball. Three players from the group — Wagner Gomez (infield/catcher), Robert Garcia (outfield) and Jason Creasy (pitcher) — were selected to join the Ducks as they open spring training on Monday.

“We have a lot of really talented players that came out today,” Ducks president and general manager Michael Pfaff said. “I’m surprised by not just the quantity but the quality as well.

“You can see the arm strength of some of the infield and outfield candidates defensively. The velocity of a lot of the players that we’re seeing along with their breaking balls. The change of speeds has been impressive.”

Position players arrived early Saturday morning for warmups and drills, which included a 60-yard dash and defensive drills. They were judged by Baez, outfielder and hitting coach Lew Ford, and pitchers John Brownell and Rob Rogers during the first open workout in Pfaff’s 16 years with the club.

And though most everyone was there with serious intentions of competing for a spot on the roster, everyone cheered when Goodman, a former baseball player at Stony Brook who graduated in 1974, laced line drives into the outfield during his round of batting practice.

“This is a place where we try to create smiles at the end of the day and positive memories,” Pfaff said. “Whether that’s with something like a baseball game with affordable tickets and a clean, safe environment for fans to come out, or for someone like Larry to come out and chase his childhood dream one last time. That’s awesome. It’s a great story.”

Make no mistake, though: The open workout was not about getting publicity. In the ever-changing landscape of the Atlantic League, in which rosters change regularly, Pfaff hopes the players selected can help make the Ducks a better ballclub.

Goodman, with a hearty laugh and a toothy grin, offered his own analysis of those with whom he shared the field.

“Whoa! I was playing first base, I mean the balls are going past me so quickly,” he said. “At fantasy camp, the balls kind of trickle past you. Here it’s like a line drive and you can barely react. It’s not as easy as it looks.”